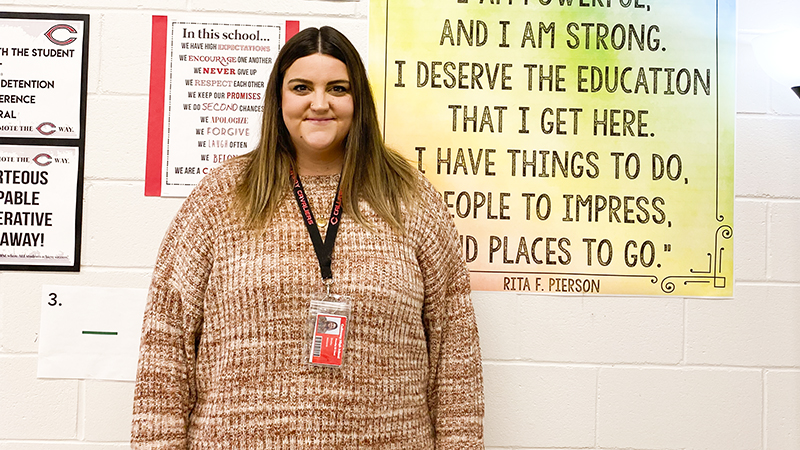 Editor’s Note: This is a continuing series on teachers of the year nominees in Troup County.

But it wasn’t too long before her love of working with students brought her back to the classroom.

“During that time, I loved it. I love designing. I’m passionate about design, but I really missed my students. I missed that connection,” Holcomb said.

Holcomb moved to LaGrange when she was in the tenth grade. She attended Troup High School and went on to graduate from LaGrange College in 2016 with a bachelor’s in art and design.

After graduating, she took a job as a graphic design teacher at Callaway High School.

“I did not know what the heck I was going to do with my life. I actually reached out to my graphic design teacher,” Holcomb said. “She informed me that there was a job opening here, so I applied. I got an interview, and I got hired.”

However, Holcomb said she chose to leave after her second year as she wanted to try a professional career in graphic design.

“I constantly told my students to go out and do what they wanted to do and chase their dreams, but I felt like I didn’t really do that,” Holcomb said.

“So, I left after my second year on good terms, and I pursued a graphic design career.”

But she missed the classroom too much to stay gone for long, and now she’s the teacher of the year at Callaway High School.

CHS Principal Jason Graham said he has witnessed the impact Holcomb has on her students and their school.

“In the very short amount of time that I’ve been here, it has been very obvious how much influence she has in the school and the things that we do.”

Krystyn Garrett, a student in Holcomb’s class, said she enjoys the class and work that Holcomb does.

“She just has fun with us, and I enjoy her class and her… We design stuff on the computers, on Photoshop and Illustrator. Then we sublimate or screenprint or heat press stuff,” Garrett said.

“Then, we did something brand new … We hosted a homecoming festival out here in the parking lot at the school, and it was a huge success.”

Holcomb said the success of the homecoming festival prompted many of her students to want to try and organize one for the upcoming holiday season.

“They’re like, ‘let’s do a Christmas carnival. and let’s light a Christmas tree and have snow!’ All kinds of craziness…the idea of live reindeer got brought up and Santa Claus,” Holcomb said.

“It’s like … That’s a great idea for next year, but we’re too far in the year to plan that right now.”

Above all, Holcomb wants her students to know that she cares for them and is there when they need her.

“I want to be known as being fun because I think that’s important. But I also want them to always see me as compassionate and just [for them to know] that I’m here for them if they need anything,” Holcomb said.

Kaitlynn Creed, a student of Holcombs, said she feels support from Holcomb in the classroom.

“She’ll help you with anything. She doesn’t have to help me with my college stuff, but she will.” Creed said. “If I could stay in this class all day long. I would. I promise you, I would.”

Creed said that other students share this sentiment as well and that it is obvious during transition before class starts.

“You cannot get us away from her. As soon as we come in, we do not sit in our chairs. We come to her desk, and we talk to her. Then, we’ll go do our work,” Creed said.

This passion for students is seen in Holcomb’s personal life as well as her fiancé, Andrew Goins, who comes with her to support the students when he can.

“He loves coming to the football games.,” Holcomb said.

“He loves coming to events. He loves interacting with students if he knows them,”

Holcomb and Goins will be getting married in December and she said her job helped her prepare.

“I am getting married in two weeks … It’s been super awesome because I’ve gotten to use so many of my design abilities for my wedding,” Holcomb said.

Holcomb said she’s even had two students who went on to pursue graphic design after high school.