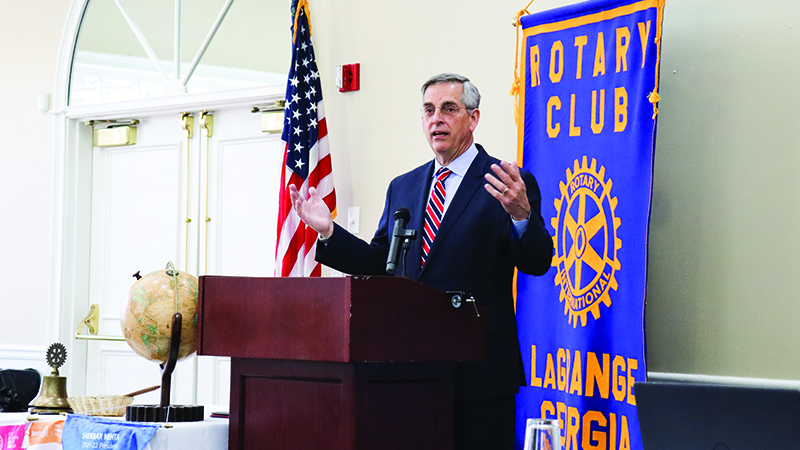 It was a busy day for Georgia Secretary of State Brad Raffensperger on Tuesday. He announced in the morning that his office was suing the Department of Justice for information related to the DOJ’s own lawsuit regarding the Georgia Election Integrity Act of 2021.

Shortly after, he spoke at the LaGrange Rotary Club, making his first public comments on the lawsuit and discussing voter integrity and confidence in Georgia.

His two main talking points were about the controversial HB 202 and the 2020 November Election, which resulted in a lot of attention on Georgia as votes came in the day s after Election Day.

In an interview with The LaGrange Daily News after his speech, Raffensperger said the Department of Justice stalling his department’s request factored into the decision to sue. Essentially, Raffensperger’s office is suing to get a FOIA request completed.

“We’ve waited over 90 days. They have a 20-day window to get back information,” Raffensperger said. “So we have a Freedom of Information Request.  We negotiated a lawsuit, so we can get an answer.”

In a press release, the secretary of state’s office said that the DOJ stonewall “is depriving plaintiffs and the public of vital information needed to determine the extent to which and by what methods the government is colluding or conspiring with outside entities to carry out a political agenda.”

The lawsuit argues that other states have similar laws to Georgia but aren’t being sued.

Raffensperger said he aims to acquire the correspondence emails from activist organizations. He aims to see why Georgia was targeted.

“For years if you look at what Georgia has done, we actually increased the number of days of early voting,” Raffensperger said. “We have more early voting than several other states that we listed in our lawsuit, and yet they’re not suing those states.”

The questions Raffensperger hopes to find answers for are crucial and timely as he predicts there will be a high turnout for the Georgia governor’s race in 2022.

Stacey Abrams announced Wednesday that she plans to run.

“We expect that there will be a high turnout … With our turnout model going from 4 million to 5 million. I think there’ll be north of 4 million that show up in 2022 for the governor’s race,” he said.

The day before his visit to LaGrange, Raffensperger sat down with the House Committee responsible for investigating the Jan. 6 attack on the Capitol. He spent over four hours on his testimony to Congress and went into more details regarding the letter he sent them.

“They really just asked what happened in 2020. We went through all the issues that were raised. Then all of the answers that I have for every one of those things,” he said.

“That letter was sent on Jan. 6 and to this day, no Congressman, no one has ever written me a letter coming back and said, ‘we read your letter. We disagree with you on this point or this point.’”

According to Walter Jones, the communications manager for voter education, Raffensperger’s visit to the LaGrange Rotary Club was a part of a series of visits his office planned to discuss election integrity and voter confidence.

“The whole point of it is to just answer public questions and try to ensure that people have confidence in the election system,” Jones said.

“Because if they don’t have it, they won’t vote. And if people don’t vote, then they get frustrated.”

Raffensperger said that he supports the current method of the voting system as it keeps everything at the local level and allows states flexibility in their voting system.

“I think that it’s best when we have a decentralized approach. It really works best because each state wants to do things a little bit different,” he said.

He also mentioned the process in how his office is going through current voter lists and deleting inactive ones from their system.

“We update. We now do it on a constant basis. This year, 2021, we’ve been fully integrating ourselves and incorporating ERIC, the electronic registration information center,” he said. “We send them our data packs of voter file, and they’re going through and they scrubbed everything. But what they have very good analytics on is death records.”

Raffensperger highlighted the work his office did in the 2020 election and said it was able to help alleviate issues related to COVID.

Raffensperger opened up his speech with a joke regarding the role of the Rotary Club and how it could help politicians in Washington D.C.

“When you look at Rotarians… You’re optimistic people because you have a vision of getting things done,” he said. “One of the things that we could do to really help move America forward is that I think every morning up in Washington DC we need to get our Congress to read the Rotary Four Way Test.”

Randy Nix, a member of the Georgia House of Representatives for District 69, introduced Raffensperger to the crowd and said a few words on behalf of his colleague and friend. 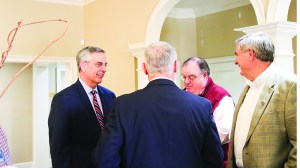 Brad Raffensperger, Georgia’s Secretary of State, spoke with the LaGrange Rotary Club on Wednesday about the election integrity bill. He took questions from the audience afterwards and aimed to help restore voter confidence in Georgia. (Photo: Iris Hersey)

“The thing that I will say about Brad with all the venom that’s been dumped on him, I’ve never seen him respond in kind,” Nix said. “He’s always responded respectfully to those who were not respectful to him. He has always been there with facts. He will tell you the truth and I have appreciated that.”

In the interview, Raffensperger said that he is excited to see the growth in Troup County. He also thanked the town’s poll workers who helped in Tuesday’s district 5 commission race.

“First of all, it’s a very dynamic county. I’m really excited that you have Remington. It’s wonderful that you have Kia,” he said.

“One of the things that when I was in the general assembly, but I think, really all of our constitutional officers, including the governor, want to see is growth throughout the entire state. So it’s not just concentrated in one particular location. We get excited when we see that things are going well in LaGrange.”