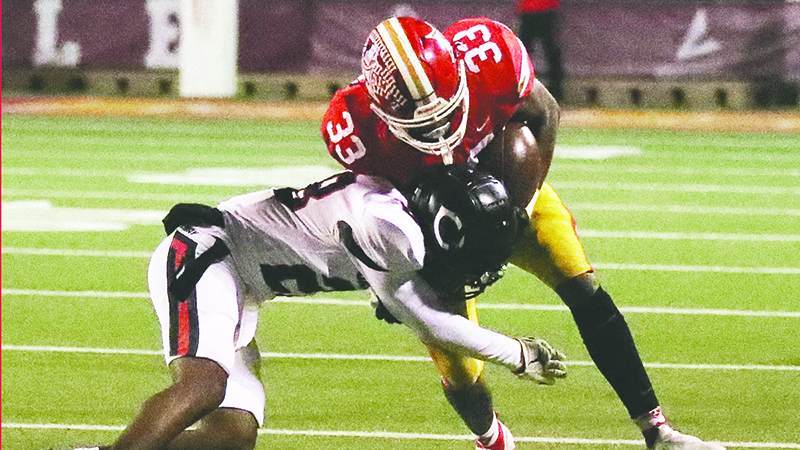 THOMASVILLE — The Callaway Cavaliers got themselves into a hole early.

Very early, in fact. And it proved too much for them to surmount.

Malik Harper ran the opening kickoff back 92 yards for a touchdown, and the Thomasville Bulldogs never looked back, beating the Cavaliers 31-6 Friday night at Veterans Memorial Stadium in the Class AA state semifinals.

Thomasville will play Fitzgerald, a 27-6 winner over Swainsboro, for the state title Dec. 10 at Center Parc Stadium.

The Cavaliers finished the season at 10-3.

Even after Harper’s big play to start the game, it was turnovers and Thomasville’s stingy defense that held Callaway’s offense in check.

A fumble on the Cavaliers’ third play of the game led to Daniel Belvin’s 31-yard field goal and a 10-0 Bulldogs lead less than five minutes into the game.

The Bulldogs wasted little time in stretching the lead to 24-0 early in the fourth quarter, Set up by Ty’Rundai Hayes’ fumble recovery at the Cavaliers’ 40, White ended the drive with a 16-yard scoring strike to Cole Shaw with 8:35 left in the third quarter.

Callaway finally got on the board, thanks to a 24-yard touchdown pass from DeShun Coleman to Exavious Reed with 10:42 to go in the game, but the Bulldogs iced it on White’s bruising 32-yard run down the sideline for the game’s final score.

Callaway’s defense held the Thomasville rushing attack, which rolled up more than 300 yards over Rabun County, to 169 yards. But the Bulldogs limited the Cavaliers to 36 yards rushing.

The Cavaliers also committed four turnovers, two of which led to scores. The final turnover was an interception in the end zone with less than a minute left.

“The turnovers were hard to overcome,” Wiggins said. “They had a lot of explosive plays. They played hard. They’re a great football team. There were opportunities. We had big turnovers, and they made plays down the stretch that ultimately decided the game.”