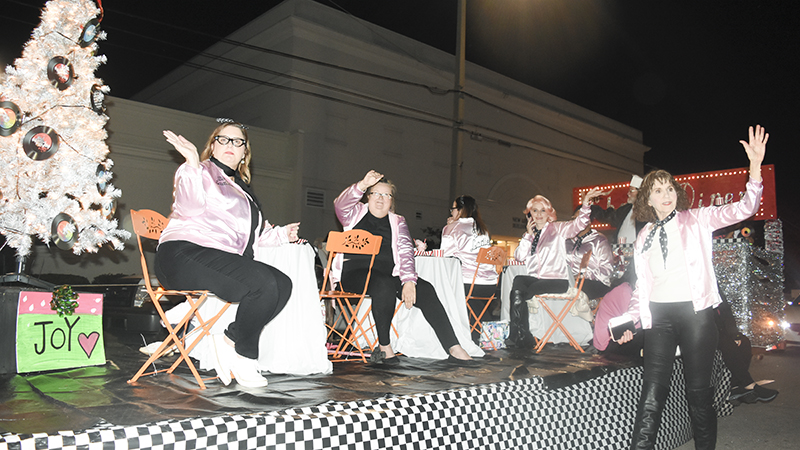 The annual Christmas parade took over downtown LaGrange on Thursday as 108 entries brought the fun of the holiday season through town.
Stacy Hardigree, Young Singers of West Georgia Conductor, was this year’s grand marshal to go with the theme of “A Magical, Musical Parade.”
The festivities started before the parade with live music, face painting and games. Local businesses set up all over downtown with various treats. The parade was hosted by the LaGrange-Troup County Chamber of Commerce and Kimberly-Clark.
Leslie Traylor, director of member engagement for the chamber, said they always appreciates everyone who gathers for the parade and helps pull off the event.
“I would just say how thankful we are for the community for coming together. We’re so grateful for their support every year,” Traylor said.
Sara Grace Todd, the communications manager for the chamber, said she felt the entire night went well.

“It was awesome. Definitely, the best we’ve done. Our group has been in the chamber about three years,” Todd said.
“It’s the best one we’ve done collectively as a group, [I] think. Then definitely the crowd, we’ve never seen that many people.”
This sentiment was shared by Cortney Williams, a citizen of Troup County who attended Thursday’s parade.
“It’s well put together. It’s well organized. Everything looks so nice. It’s just nice to see everybody come out to support [the parade],” Williams said.
Alleyway Lamadieu, another citizen, said she was excited to see all the creative floats in the parade this year.
“I’m excited to see the different things. I don’t know the theme this year, but I’m excited to see all the floats,” Lamadieu said.
Daniel Holloway, owner of Holloway’s Pork Skins, said his business did well. He sold pork skins and hot chocolate this year.
“We sold roughly between the three different sizes and variety, about 50 [or] 60 bags,” Holloway said.
Holloway said this year was an improvement from last year when the pandemic severely impacted the parade.
“COVID-19 year was the roughest year … This year, it ain’t been great, but it’s been blessed. Anytime God can keep your head above water, you’re doing alright,” Holloway said.
Eli Damron, a student in Troup County, said he liked seeing the different Greenpower cars in the parade.
“I really liked how they showed all the Greenpower cars and all the different schools,” Damron said. “My favorite float was probably the one with the snow machine on the back, which popped out snow.”
Katie Van Schoor, the marketing and communications manager for City of LaGrange, said earlier in the week that the city had planned a litter clean-up to address the issue of trash after the parade.
“We have a litter cleanup this Saturday. We always strategically do it the Saturday after the parade,” Van Schoor said. “We do it with St. Mark’s because we clean up the parking lot of LaGrange High School after the parade.
The winners for this year’s parades were as follows. West Georgia Technical College won the Warren Adams Directors Award/Best in Show.
Faith Baptist Church won the church division with Baptist Tabernacle coming in second. Chatty Women LaGrange won the civic division, with Troup County Archives & Legacy placing second.
LaGrange Piano won first place for the first time division with Pleasant Grove coming in second.
Duracel won the large business/industry division, Great Wolf Lodge placed second. Ethel W Kight Elementary School placed first in the school division, followed by Callaway Elementary School. America’s Best Garage Doors, LLC won the small business division and Royal Academy School of Dance came in second.