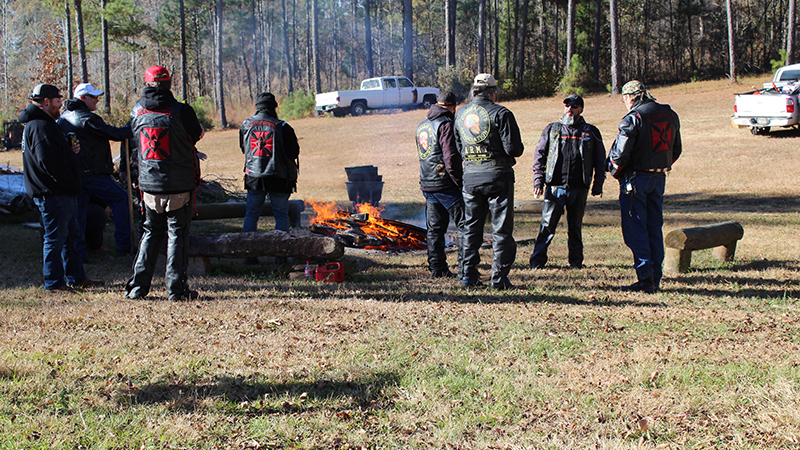 The Defending America’s Defenders (D.A.D) annual toy run took place on Saturday and raised thousands of dollars for veterans and children. The event was held at 2516 Upper Big Springs Rd. and brought in over $8,000. It included a poker run, which sent motorcyclists all over town and an auction was held thanks to the help of many local businesses.

Marc Camerad, the president of D.A.D, said he considered the event a success.

“It was a very successful event. This is probably the biggest turnout we’ve had in years,” Camerad said. “It was a good turnout even though the weather was cold and it being a holiday weekend. We had close to 40 riders.”

Ray Brundage, a member of a motorcycle club in LaGrange, said he was impressed by the turnout for the event as well.

“A whole bunch of people braved the cold… They donated and they went to the various points… and they got their little card. Then they came back and warmed up by the fire,” Brundage said.

He said that his favorite part of the event was the auction. Many items were up for grabs for the participants.

“Mine was probably doing the auction. I got up on stage and we had a little PA system and they brought up the auction items,” Brundage said.

DeNeese Langford Begley, owner of 104 Pub, raised $4,300 for the event and thanked her patrons for all their help in a press release.

“The Toy Run was amazing. We raised $4,300 in five days. We have the most wonderful patrons. I thank each and every one of you for making this happen. You are making a whole lot of kids happy for Christmas,” Begley said.

Elia Baltes, a patron of the pub, said she is proud of the pub for helping raise money and their work with nonprofits in the area.

“As a volunteer advocate for our communities, I am amazed at the love that the patrons of 104 show, not only to each other but to the community,” Baltes said.

Camerad said that the money raised will go towards families in need as well as veterans in the community.

“What we’ll do is we’ll take the toys and donate them to three different places that will distribute the toys to kids that need them,” Camerad said. “We also will adopt a couple of families, local families, in need. We’ll give them cash money, take them grocery shopping and also donate toys for their kids.”

D.A.D. and the Bikers Association of Troup thank all the businesses of LaGrange and Troup County and people that helped and donated to the DAD Toy Run this year.