Did you see this train? Faith Baptist float wows at Christmas parade 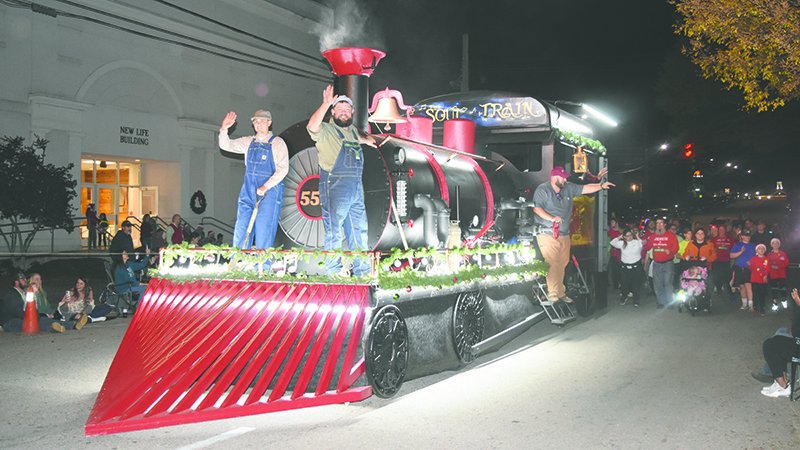 Anyone that attended the annual Christmas parade on Thursday could not miss the giant train that rolled through the streets of downtown LaGrange. Faith Baptist Church won the church division with the float, a reward for a year’s worth of work. Donald Yancy, an organizer for the float, said the idea was inspired the night of the 2020 LaGrange Christmas parade.

“It goes back to last year after the parade. Our sound guy, Phillip Richardson, played that song, ‘This Train is a Holy Train,” Yancy said. “’I said, “man, we are building a train next year.”

Yancy said the float was a large collaboration project with several different people in the church, including Jonathan and Paul Hutchins.

“Once I [gave] the idea to Jonathan, [he] had this thing pictured in his mind of how we could do things and when we went [to] that boneyard, it was just like there in this pile of junk pipes lays the train,” Yancy said.

“Paul painted it three different times. We would paint it and it [would look] great. It looked great in the pictures, but when it would dry… We’d have to tape it off and paint it again.”

Citizens who annually attend the Christmas parade may not have been surprised by the grandeur of Faith Baptist’s float this year. Last year, they had a helicopter for their float.

“Last year we had a helicopter. We took a full Coast Guard helicopter out of a boneyard and brought it and put it up on that same float we built this on,” Yancy said. “[We] repainted and called it “Christ Guard.”

Yancy said their float already has several commitments this December as other people wanted to utilize it for their parades.

“That train is on a lowboy right now on its way to Polk County, Georgia. The city officials of Cedar Town heard about it and saw it. They wanted to borrow it. They’re using it for their city float,” Yancy said.

“They’re supposed to bring it back to us on Monday or Tuesday and we’re going to make a new banner. The Hogansville parade is next Saturday the 11th, so we’re going to do like a big Callaway helmet.”

Yancy said more than anything it was not the float itself, but the members of their church that made the float what it was this year and every year.
“We usually have 100 or more people from the church that are walking with it, and they’re the ones that make it what it is,” Yancy said. “They’re the ones that get to tell people Merry Christmas and try to make a difference in people’s lives.”