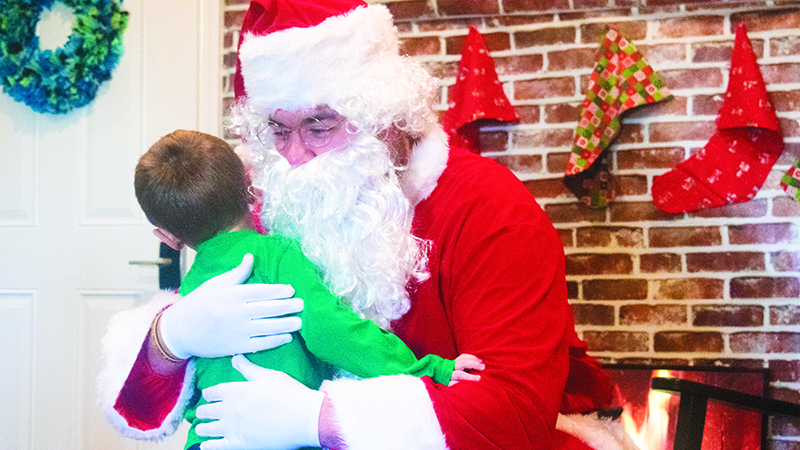 What appeared to be a traditional visit with Santa scene was set up Saturday at the Exceptional Way in LaGrange. It included a crackling, digital fire, a Christmas tree and even Mr. and Mrs. Santa Claus. But this scene was laid out very specifically, as it was laid out purposely to cater to children with specific mental or emotional issues.

“We wanted to keep it intimate,” said Cindy Skipworth, the Exceptional Way’s executive director. “The whole point is [to have it for] kids who can’t wait in line with all the lights and crowds because of sensory issues can have that time with Santa. Some of them may not have ever had their picture taken with Santa.”

Children visited Santa in 15-minute intervals before taking part in activities outside. Beforehand, staff members were given cards with information on each child’s sensory issue and some of their triggers, such as loud noises or textures.

Oliver traditionally works with his church’s older classes but was on board to play Santa when Skipworth told him of the idea.

“I just wanted to be part of it,” he said. “It sounded incredible.”

The experience also touched a heavy note with many parents who brought their children to the event.

Trenton has severe non-verbal autism, Haley said, and, while currently undiagnosed, is believed to have Childhood Apraxia of Speech, a motor speech disorder that affects Trenton’s ability to speak.

When Trenton was younger, visits with Santa were normal, but then he developed a sensory issue with men. However, his visit with Sensory Santa was successful.

“This seemed to help,” Haley said. “We haven’t been able to easily do things like this before. It’s very important to us.”

“A lot of parents take for granted being able to do the holiday stuff,” Devin seconded. “He doesn’t care about opening presents, things like that. Christmas morning is just another day.”

Hunter was diagnosed with Autism Spectrum Disorder and Sensory Processing Disorder just before his third birthday.

Currently, he does not have highly functional speech, limiting his visits with Santa to pictures.

“This was kind of neat though because he could do his own thing,” Betsy said. “He’s really great with the pictures, and he sits in Santa’s lap. I think he likes the [camera] flash.”

Hunter undergoes applied behavior analysis therapy at Building Blocks in LaGrange to help with social skills. His interactions with other children are limited, though he gets along well with his siblings, Betsy noted.

“I don’t know what the future holds for Hunter,” she said. “It’s nice to know that this program exists, and I know other special needs children and adults who come here, and I know it’s been a blessing to them in their families.”

Only two days after the Exceptional Way posted the fliers for Sensory Santa on their Facebook, they were completely booked.

“We didn’t even put out fliers because the response was immediate,” Skipworth said. “We had people traveling over two hours, as far as Atlanta, [to attend.]”