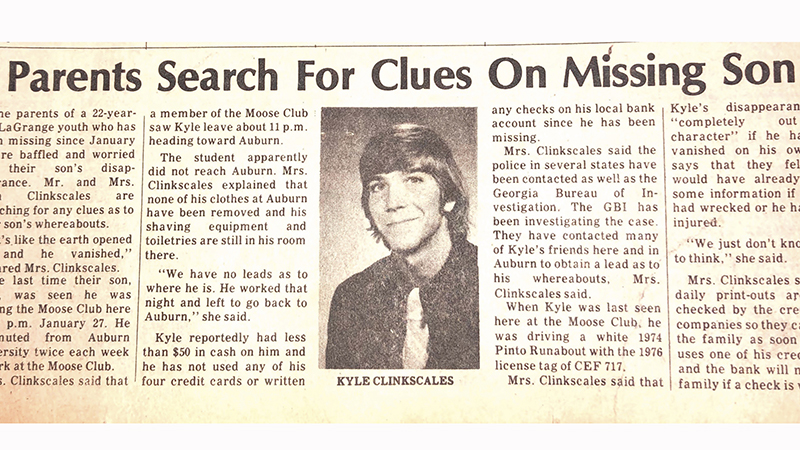 The car Kyle Clinkscales was driving when he disappeared in January 1976 was recovered Tuesday in a creek in Chambers County and bones were found inside.

It was the first lead in the case in years, if not over a decade, and sent everyone back to their archives to try to remember all of the details from 1976 — including us.

Here’s a look at the LDN’s reporting on the case for the last 45 years, with a special thanks to the Troup County Archives for helping us look back into our archives:

The LaGrange Daily News first reports the disappearance of 22-year-old Kyle Clinkscales. Clinkscales was last seen leaving the Moose Club in LaGrange at 11 p.m. on Jan. 27. Clinkscales commuted from Auburn University twice a week to work at the Moose Club, per previous reporting.

According to his mother, Louise Clinkscales, a member of the club saw him leave and head toward Auburn.  Apparently, he never reached Auburn, as his clothes at Auburn were still where he left them, as were all of his toiletries. He only had about $50 in cash on him and had not used any credit cards or written any checks.

“We have no leads as to where he is. He worked that night and left to go back to Auburn,” she said in the first story of her son’s disappearance.

Kyle’s father, John Clinkscales, announced he was offering a $1,000 reward for information leading to the whereabouts of his son. 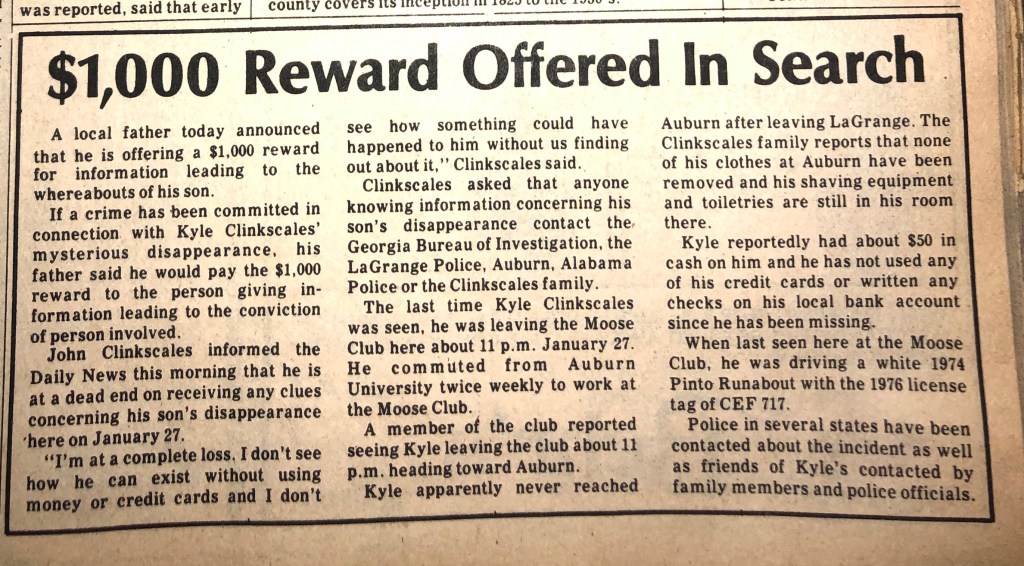 The headline in the LDN read “mystery becomes nightmare” as Clinkscales remained missing more than two months after his original disappearance.

“The only thing that could be worse than his being dead is us not knowing it,” John said.

The parents wondered in the story if foul play may have resulted in their son’s death.

“You just can’t get it out of your mind that some foul play might be involved,” John said.

In the story, it says “although some of his friends told the Clinkscales that Kyle had mentioned going away to be by himself for a while, they said they did not feel he did it that night.”

Clinkscales had just bought groceries, pictures and a potted plant for his apartment on Jan. 26. 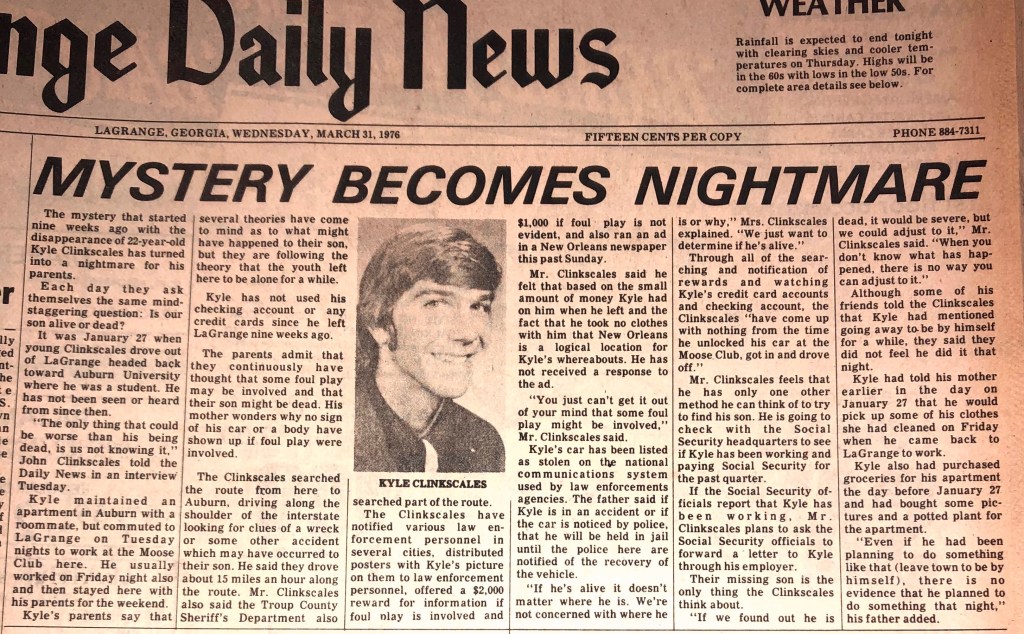 The Clinkscales took a trip to Texas after an Alabama psychic said she felt Kyle was in Texas. The couple had sent out leaflets offering a reward and showing a photo of Kyle to the 259 sheriff’s departments in Texas. In October, they then received a call from a woman who said she felt she had seen Kyle in Dallas, so they immediately left for Texas.

The Clinkscales said the woman reported that the young man came into her business a few times a month to play pool, had only been in the area since February, didn’t know anyone in the area and was a quiet person.

When the Clinkscales were eating at a restaurant a young man came in who John said looked just like his son. However, the man in Texas had a face slightly more round than Kyle and looked to be a few years younger.

“We think it was a case of mistaken identity,” John said. “But we are going to place an ad in the newspaper there to erase all doubts.”

The Clinkscales contacted psychics for their assistance, including one named Dixie Lee Yeterian, who made predictions on a California radio station and had apparently helped law enforcement there with solving cases.

The psychic told the Clinkscales that she believed their son was deceased and a victim of foul play. Yeterian described in detail where Kyle’s body could be found, including a map where she said his body is buried in Texas.

The Georgia Bureau of Investigation was given the information, but the LDN was asked not to report the exact location that the physic identified.

The psychic believed Kyle had picked up hitchhikers after leaving the Moose Club and they pulled a gun on him. She believed he was being held captive and that he was shot and killed in the town in Texas. She also believed Kyle’s car had been repainted red and given false license plates.

Three years have passed and little to no new information is known about Kyle’s disappearance.

“We keep a constant watch for newspaper articles and television and radio broadcast concerning missing people and crimes. We are interested in bank robberies, drug smuggling, murders and any other sordid activity in an effort to determine if someone with Kyle’s disappearance was involved. We do not think that Kyle would be connected with such activity, but it is something that we cannot let go by without interest,” John said in the story.

John wrote a manuscript titled “Kyle’s Story: Friday never came” about the case, which was almost the size of a book. He sent it to all major television networks. The LDN also agreed to publish it.

The Clinkscales also increased their reward from $1,000 to $25,000 with the addition of life insurance to the reward. 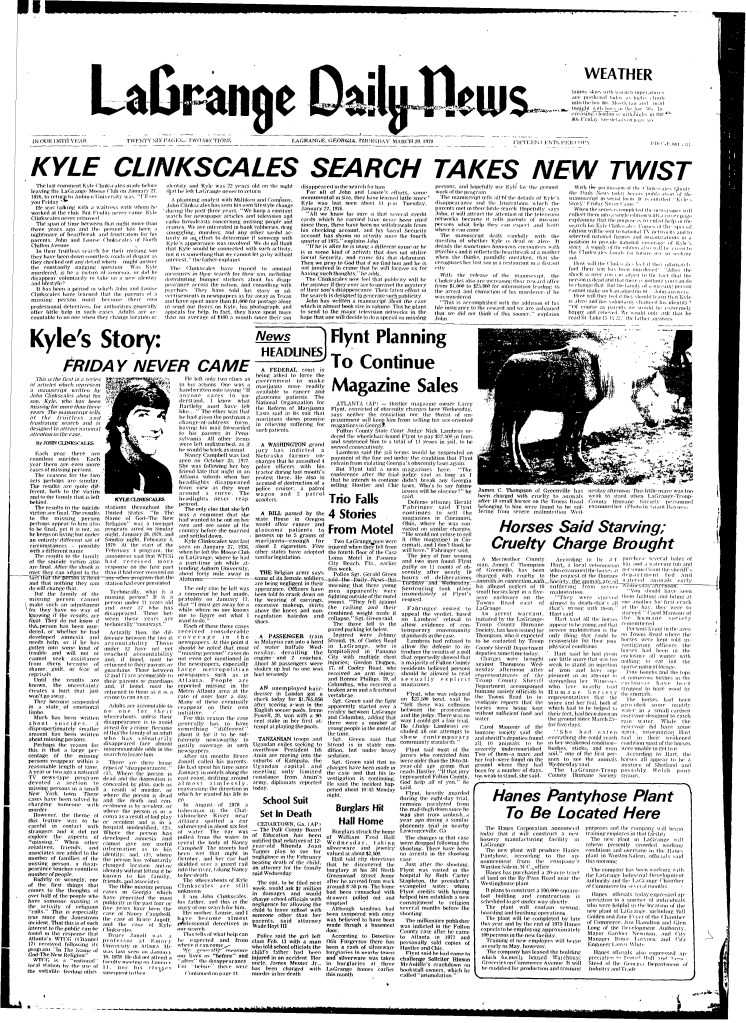 Clinkscales’ disappearance was featured in a national newspaper, the Globe. 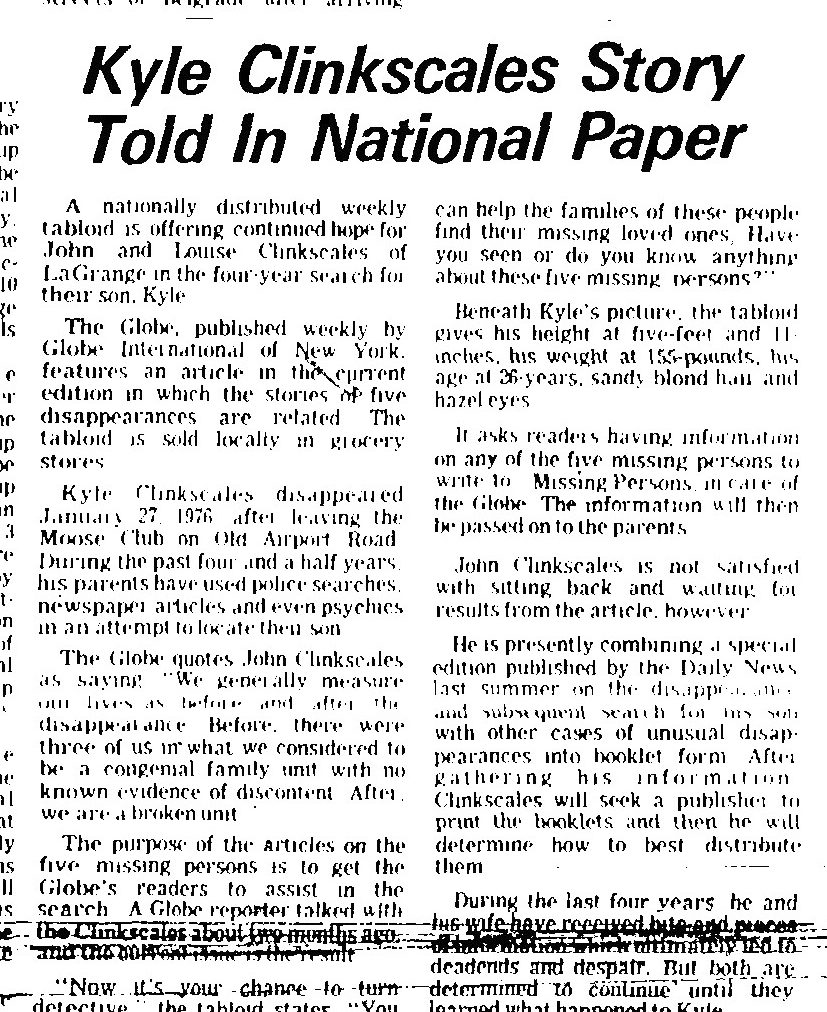 John was invited to tell the story of Kyle’s disappearance to Sen. Paul Simon of Illinois, who was chairman of the Select Sub Committee on Education. 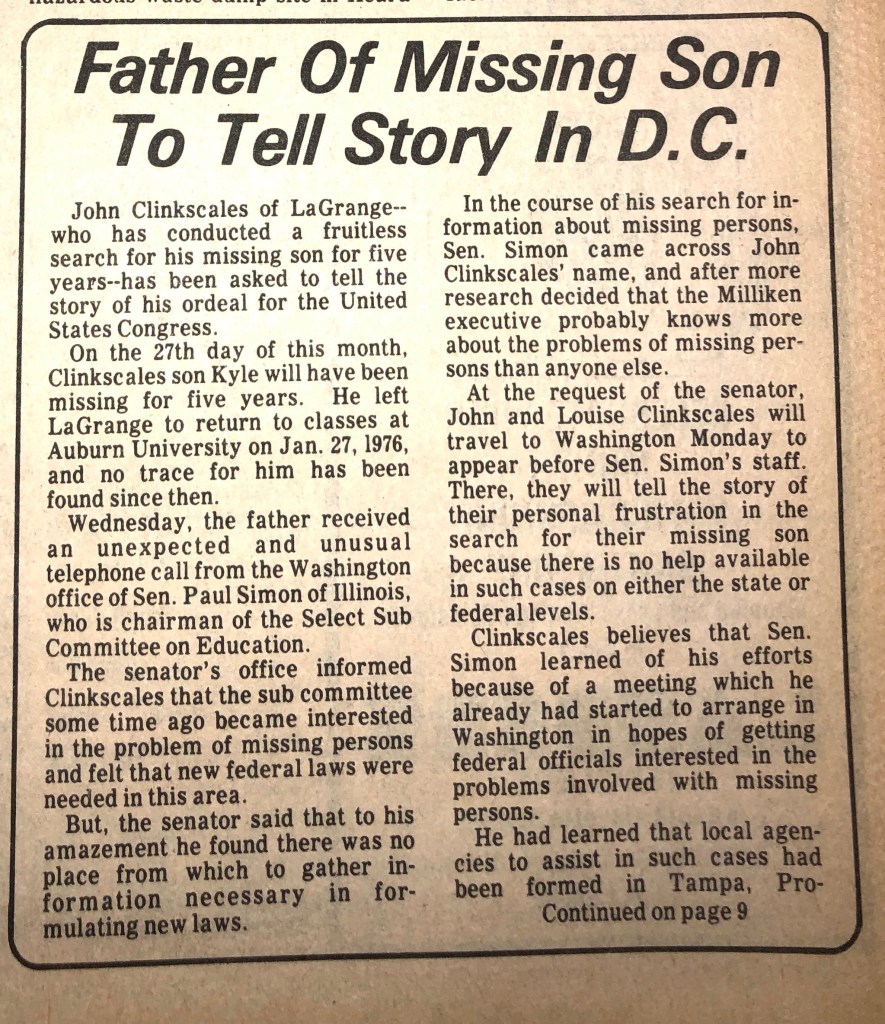 In the summer of 1981, a man from Yachats, Oregon, contacted the Clinkscales and told them he believed he was their missing son, Kyle. A Portland couple said the man, Danny Moore, 27, was actually their son.

The Clinkscales told the LDN that Danny Moore told that he lost his memory in an automobile accident and that he assumed the name Danny Moore to get identification documents. 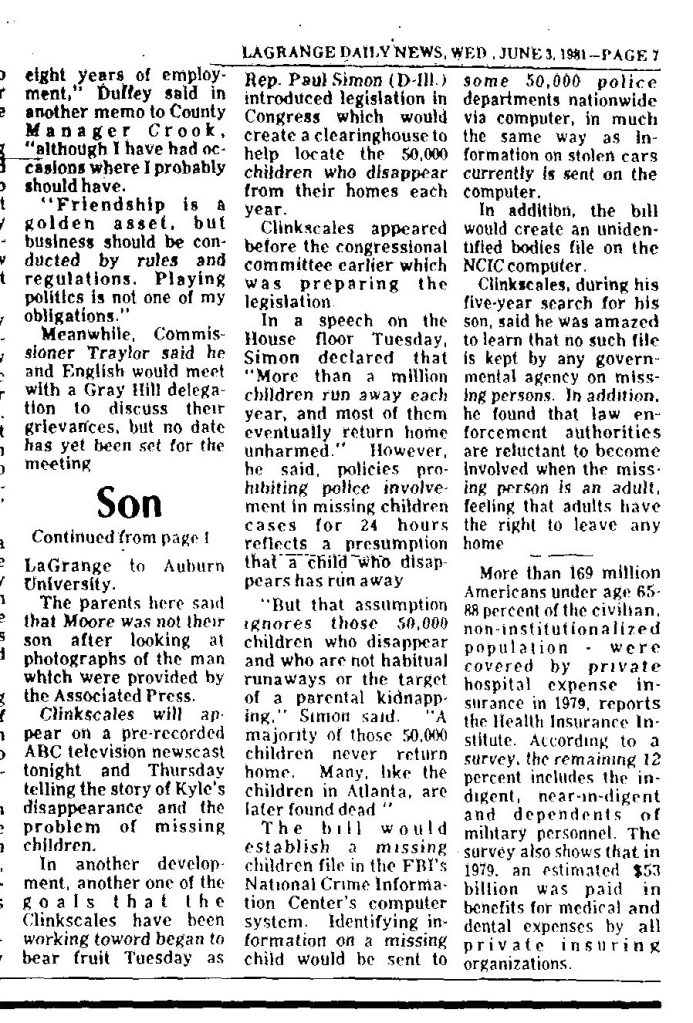 Louise and John Clinkscales were on hand in April 1985 as President Ronald Reagan called for a new partnership in child safety involving law enforcement organizations, schools and community service groups. The Clinkscales were also set to attend a Rose Garden ceremony at The White House with President Reagan on April 29. 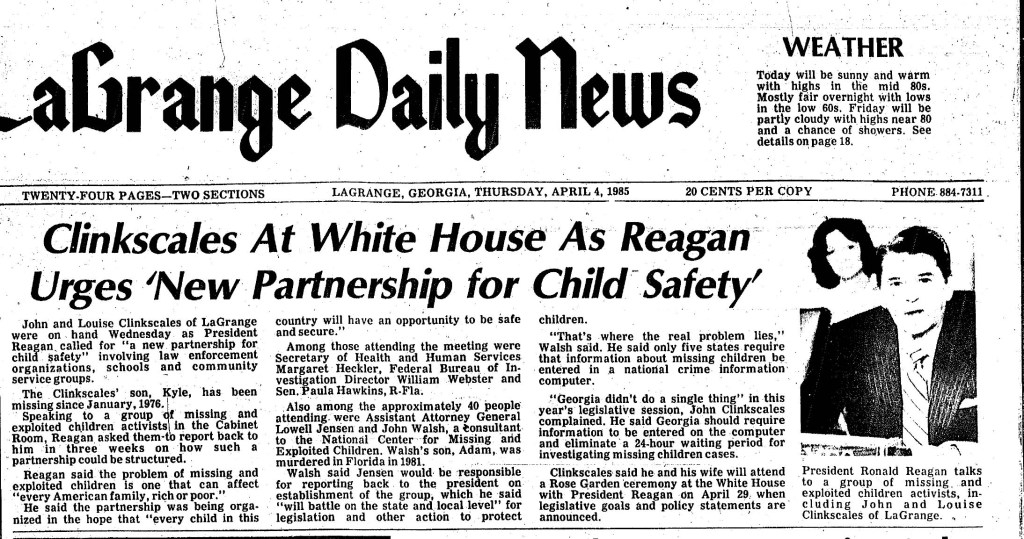 This date marked 20 years since Clinkscales had gone missing and a story in the LDN documented the time. 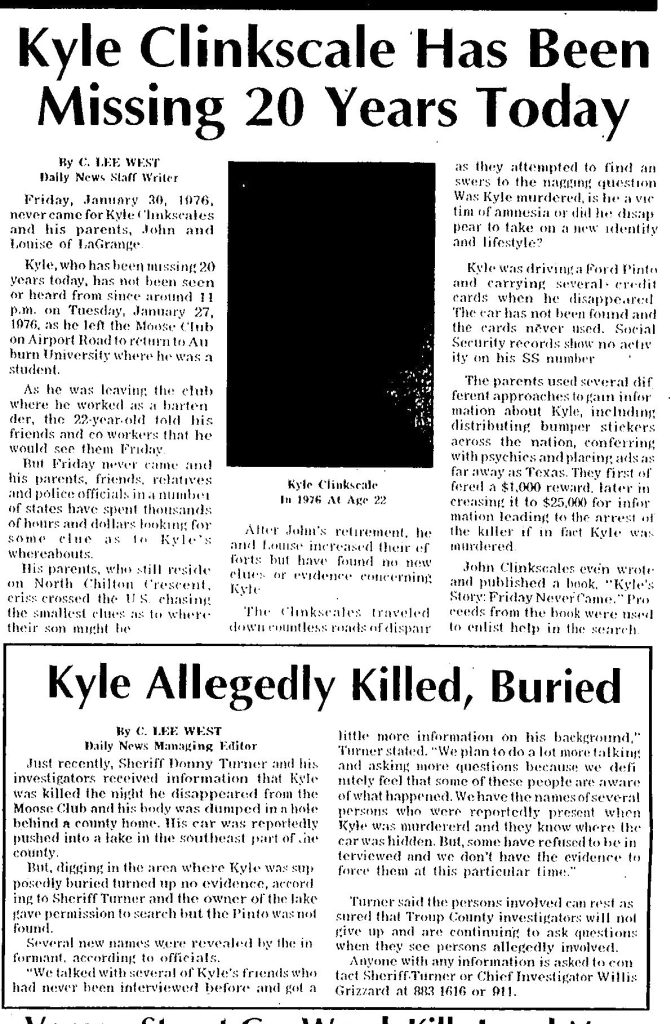 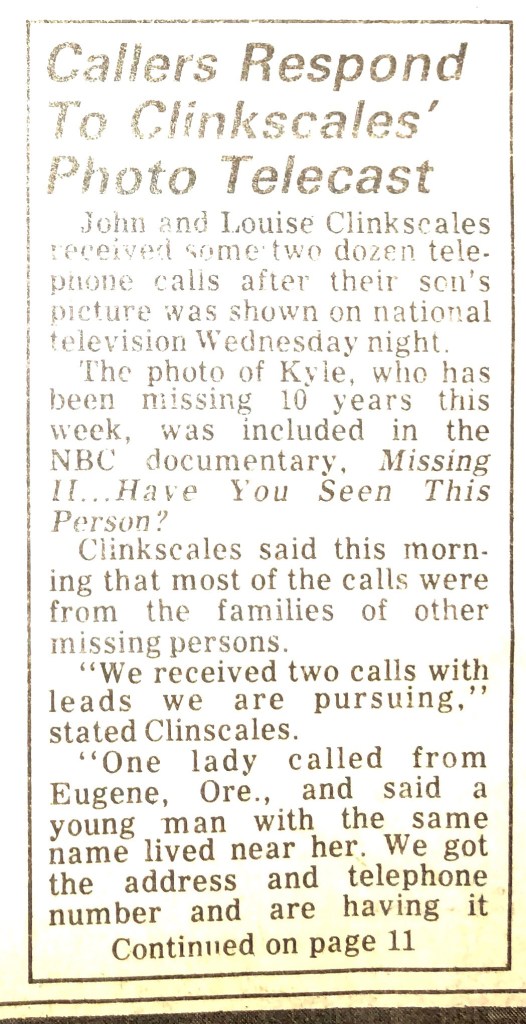 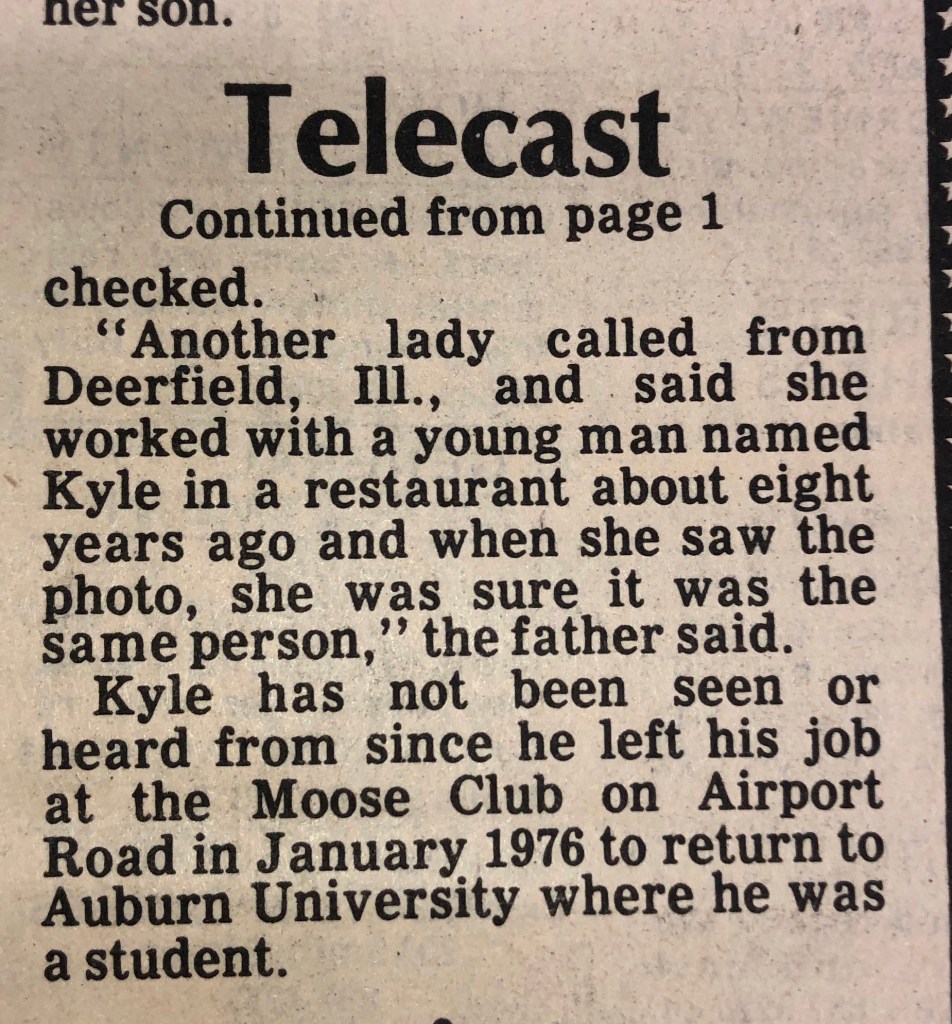 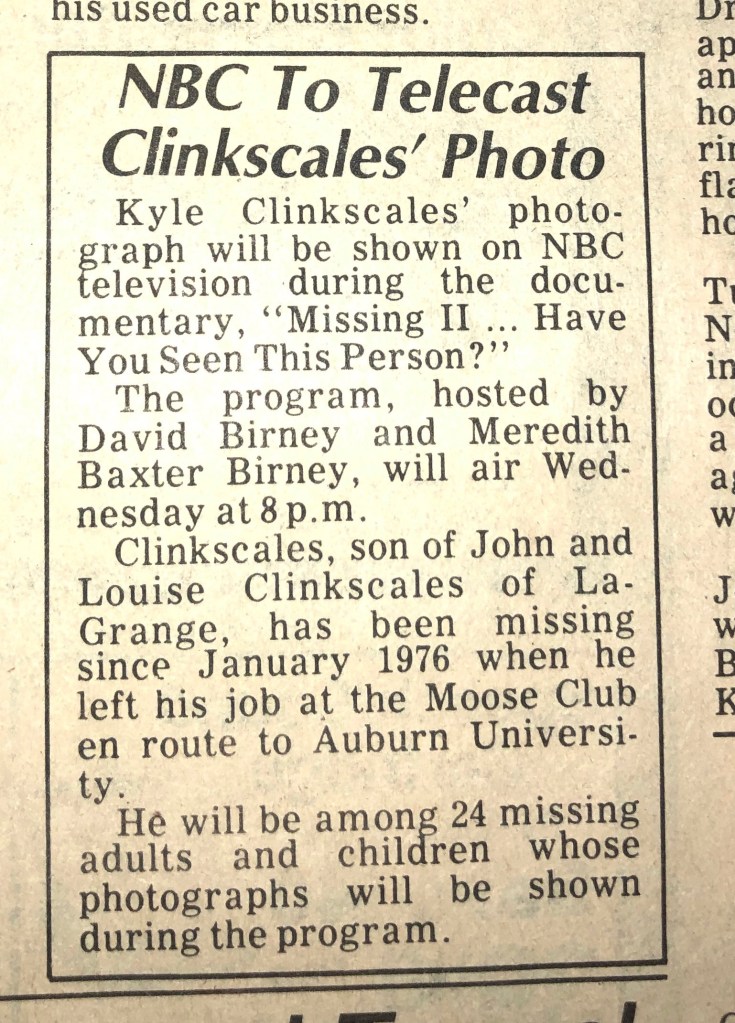 Authorities dug with heavy equipment for nearly 24 hours in an area in southeastern Troup County, but no body was found. Several items were sent to the state crime lab for analysis.

“We’re satisfied that everything is being done that can be done — except it’s 20 years too late,” said John Clinkscales.

Donny Turner, who was sheriff at that time, said they had received information prompting the search. 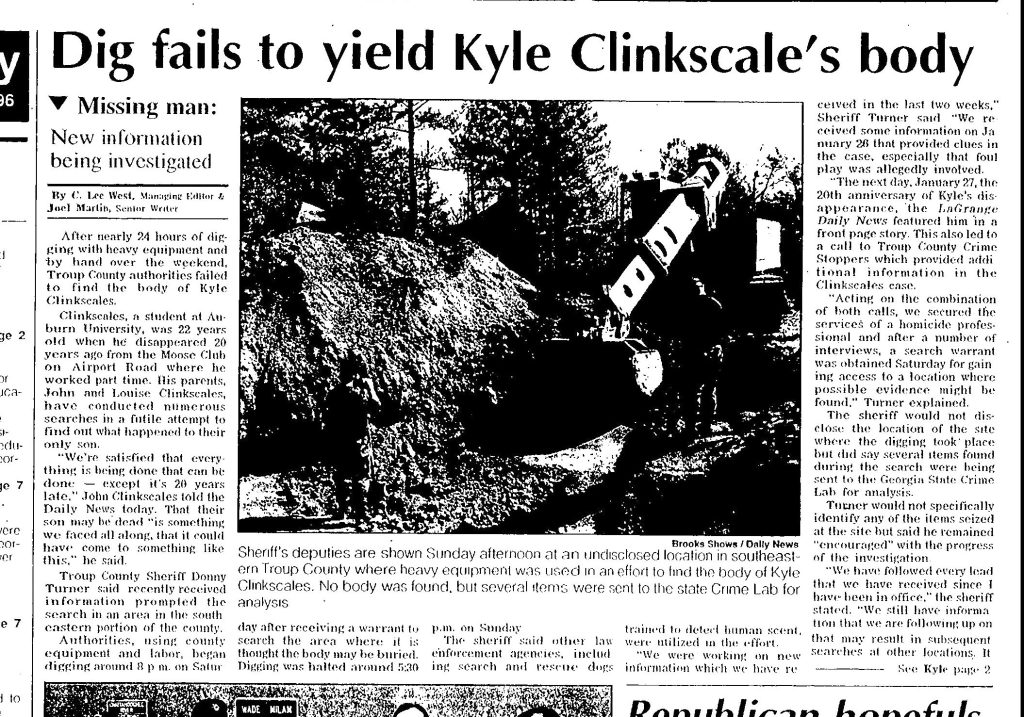 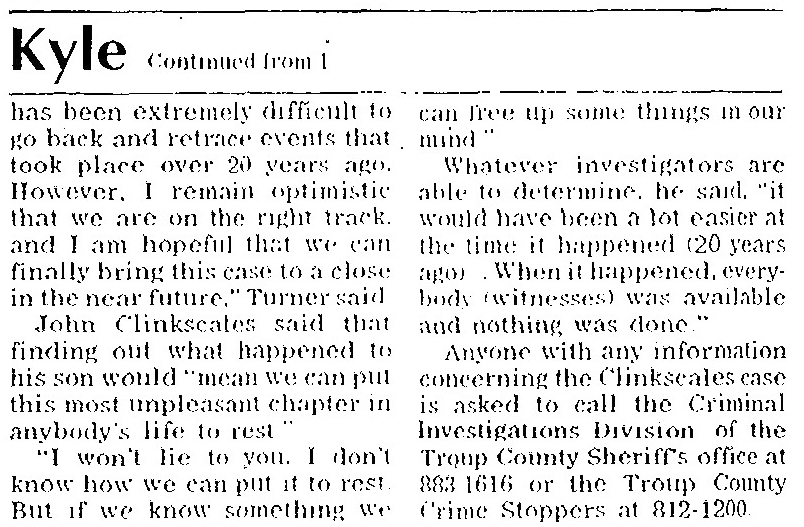 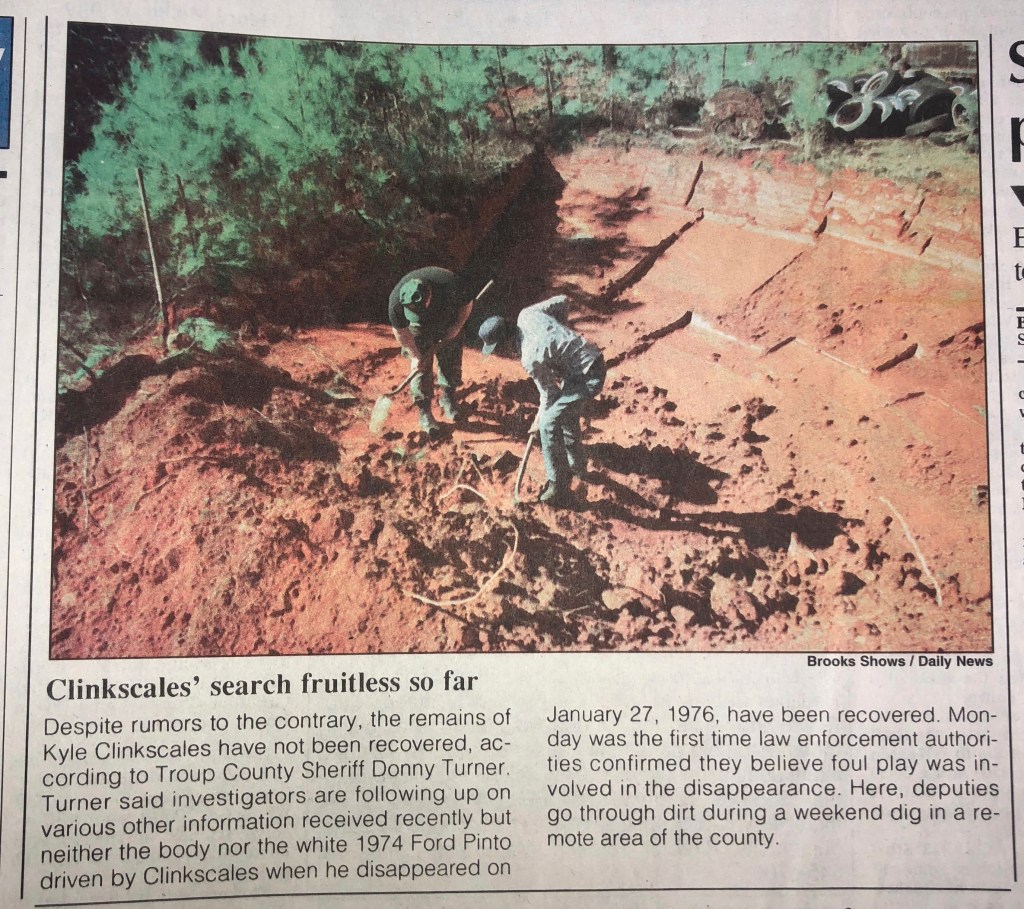 Sheriff Donny Turner said in February 1997 that he’d received valid information from two or more sources that Clinkscales’ body would be found in Stovall Lake. The sheriff’s office drained the lake in response to those leads.

“I wouldn’t dare ask this lady (owner) to drain her lake if we didn’t have good reliable information that the body could be in there,” Turner said then. 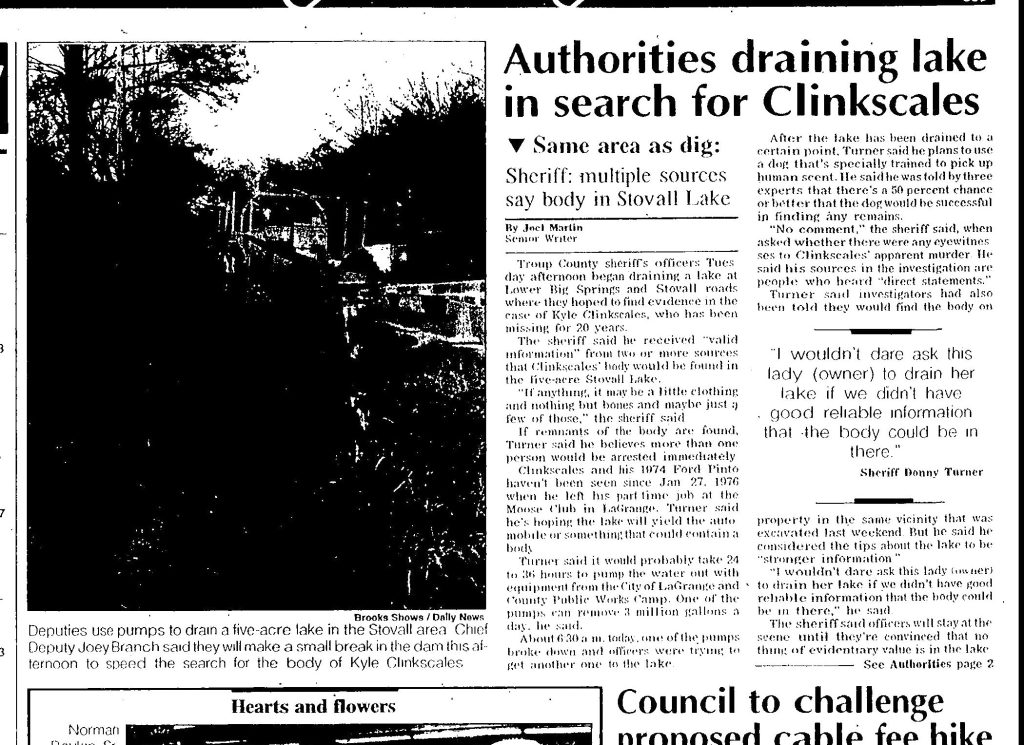 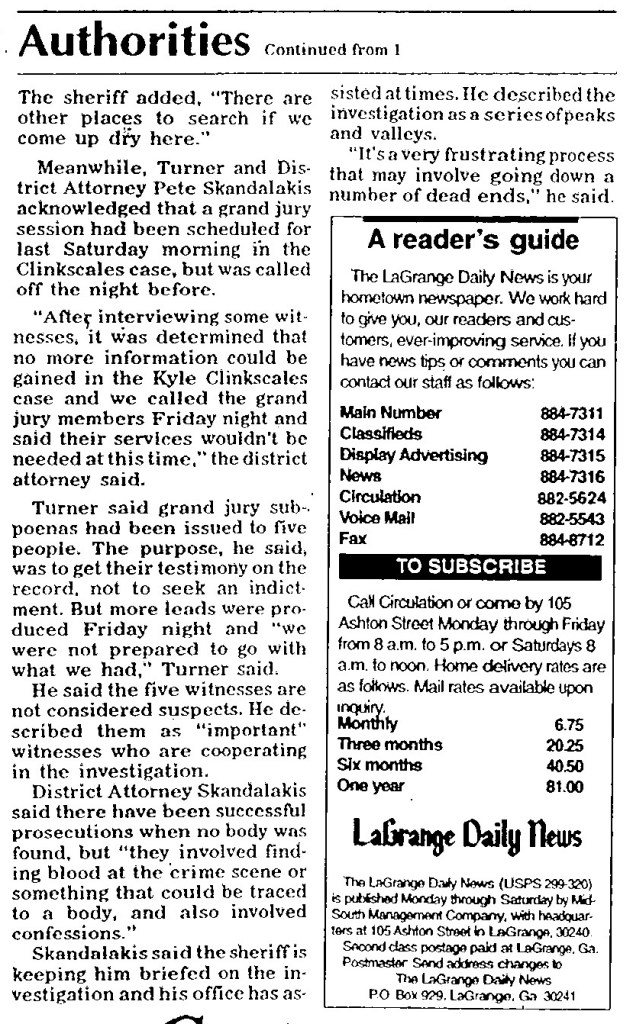 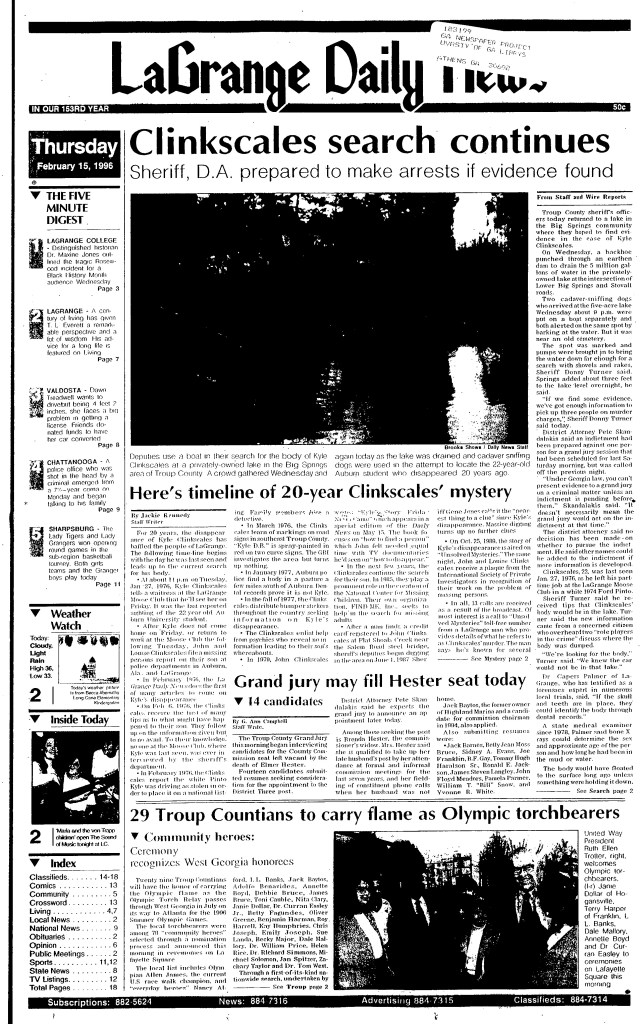 Ray Hyde, a local man who some believed was related to the disappearance of Clinkscales, told the LDN he had nothing to do with it.

“I ain’t guilty,” he said during an interview at his home.

Hyde said he never knew Clinkscales and said he had been arrested by the sheriff’s office recently for possession of marijuana and possession of a firearm by a convicted felon. 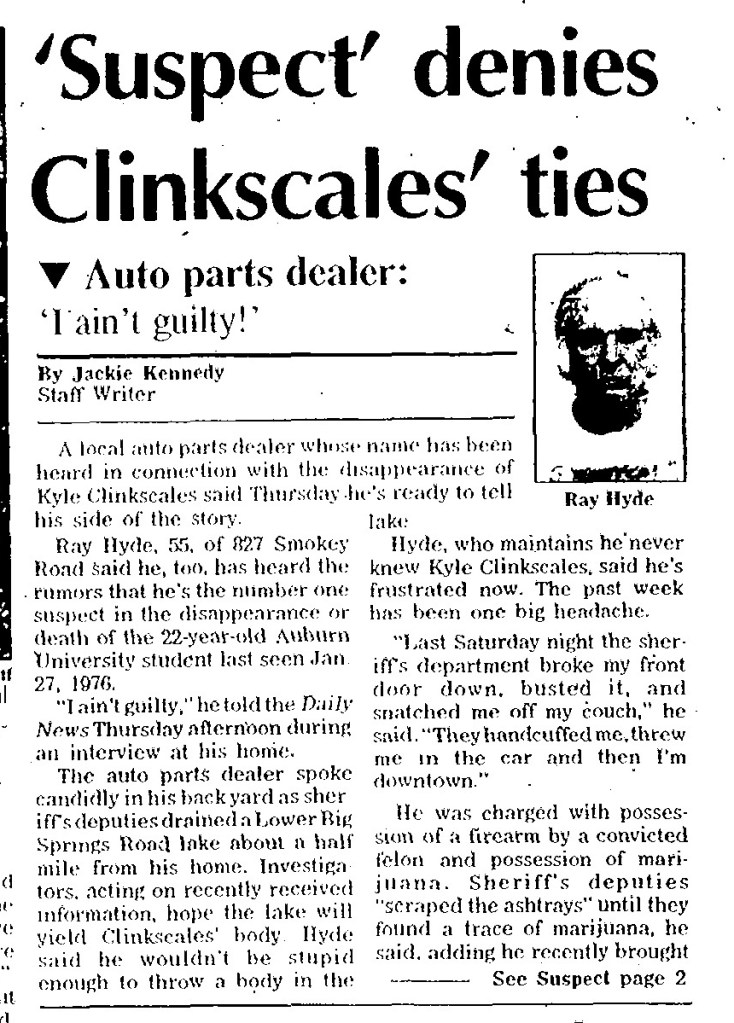 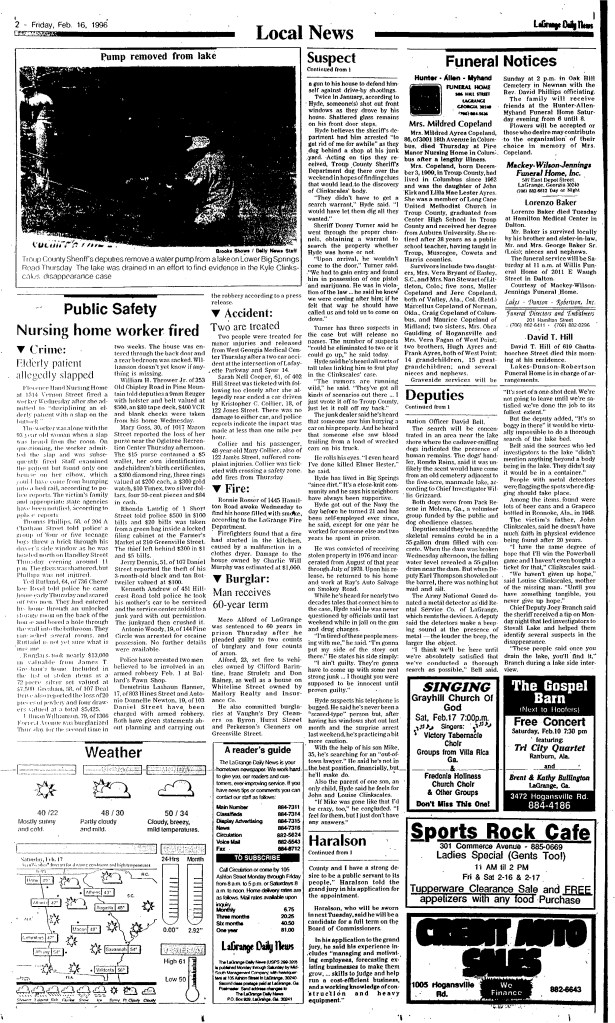 The search in Stovall Lake was suspended after nothing was found and colder weather was moving in.

“Our initial search of the location failed to reveal any substantial evidence associated with this case,” Turner said then. “Due to colder weather predicted this weekend, we discontinued the operation at p.m. Friday.”

The search resumed the following week. 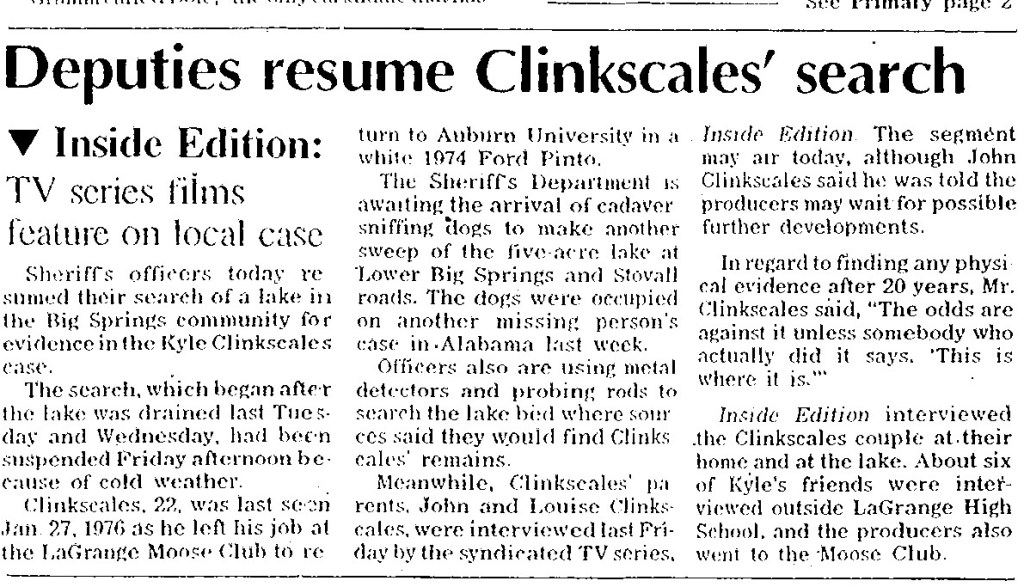 The sheriff’s office continued interviewing people who reached out after the 20 year anniversary of Kyle’s disappearance.

“We’re interviewing people who should have been interviewed 20 years ago,” said Chief Investigator Willis Grizzard. “One person told me, ‘we knew you were coming, but we didn’t know it would take 20 years.” 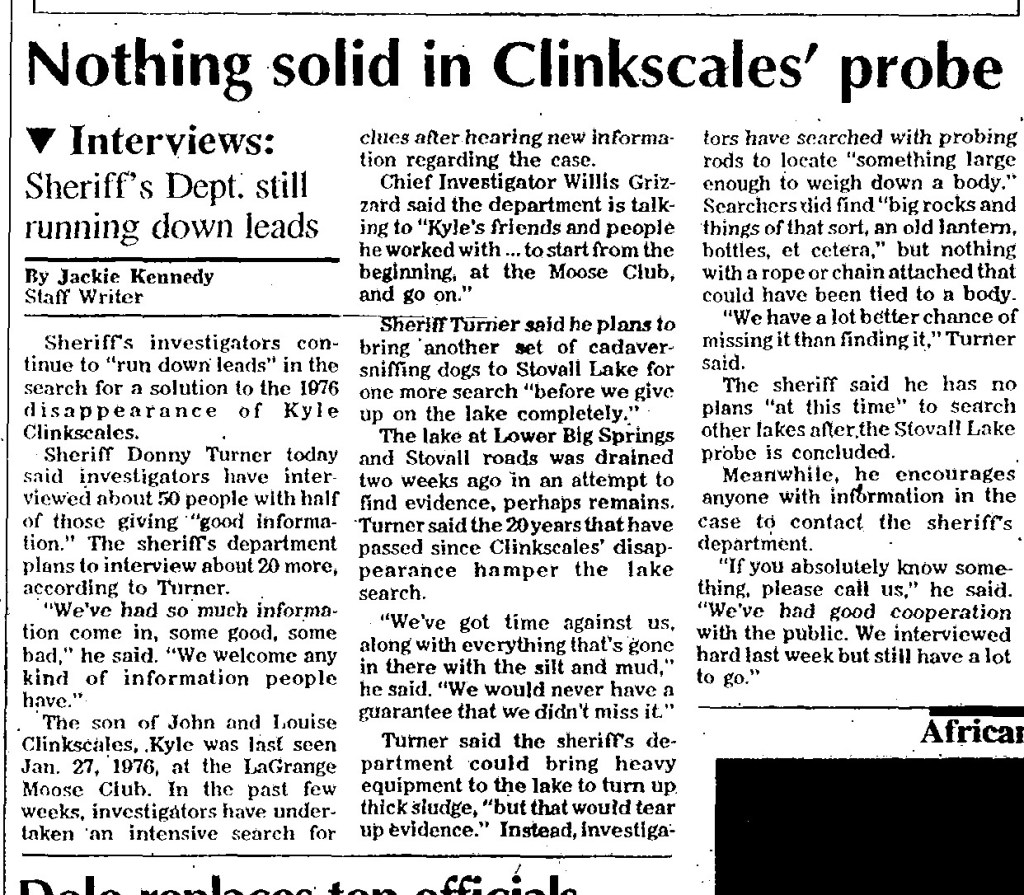 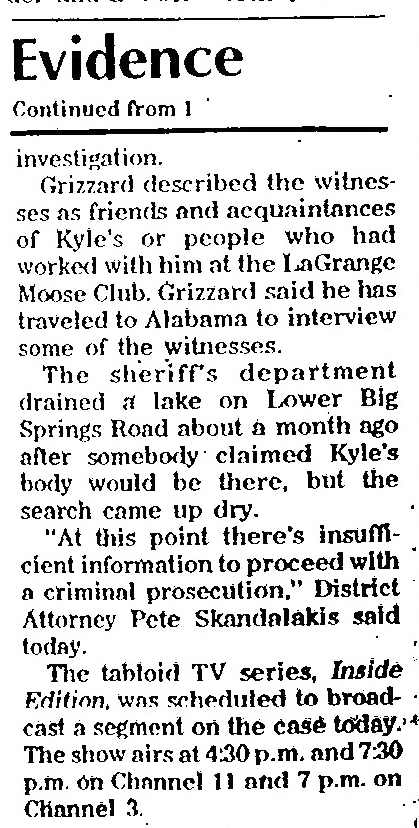 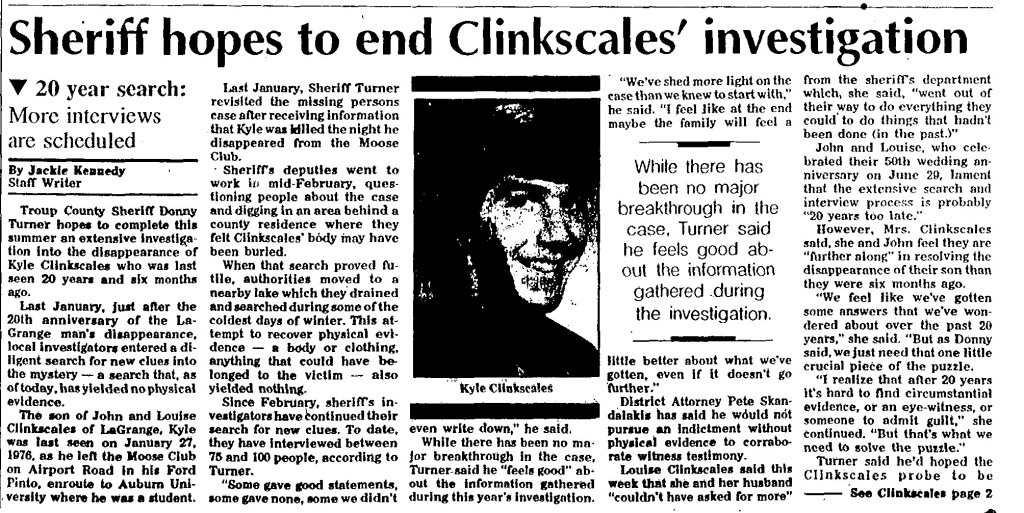 By June 2005, Jimmy Earl Jones was arrested in the case and eventually sentenced for two counts of making false statements related to the case. He was not charged with murder.