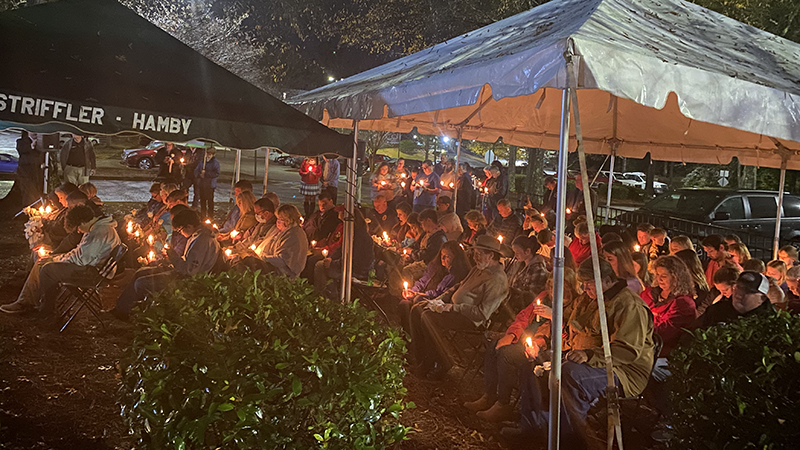 On a rainy Monday night, community members gathered to mourn the loss of children taken from them far too soon in the sixteenth annual Angel of Hope candlelight vigil. Speakers included event organizers Leigh Taylor and Kathy Reyes, Pastor Charlie Metcalf, and a reflection by Toby Abernathy.

Taylor opened the ceremony with a welcome and prayer of thanksgiving. In her prayer, she thanked God for the children being honored on Monday night.

“We thank you and especially for your children whom you have taken to yourself in the arms of your love,” Taylor said.

Reyes read a short story, ‘Roses & Thorns,’ which spoke on a woman grieving after a miscarriage. After the story concluded, she said she decided to share it due to an incident that occurred a few days earlier.

“The timeliness of my sharing it with you is not an accident. A few days ago I received a message on our angel of Hope Facebook page from a woman in Naples, Italy. She wrote to ask if I could take a photo of our angel with a note to her daughter, Janice, that had passed away in 2013,” Reyes said. 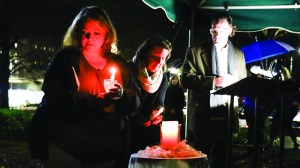 Leigh Taylor (right), Kathy Reyes (center), and Charlie Metcalf (right) start the annual lighting of the candles for the memorial.

“We shared a brief conversation about our lives and our losses. In those brief moments and that chance encounter with a grieving mother miles away and across an ocean, the story of the roses and the thorns suddenly had a new meaning to me.”

Abernathy gave the reflection for the event and spoke on the loss of his son, Kyle Abernathy. Kyle Abernathy died on July 19, 2013, after a brave fight with ewing sarcoma. Abernathy said he might not know everyone at the event but he wanted to be there for them.

“We have a lot in common even though our stories may be different. I’m always around. I plan on never leaving this town,” Abernathy said.

“If I can ever help anybody here, reach out. A lot of people know me. I’m sure there’s some that don’t. I’m always here. I love each and every one of y’all whether I know you or I don’t.”

Abernathy said it was a blessing to be Kyle’s dad, and he wants his son to be remembered as courageous. 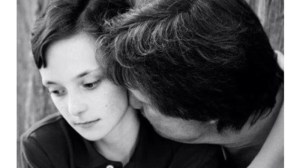 “What a blessing even though I’m heartbroken and never will be the same but just a blessing to be chosen by God to be Kyle’s dad,” Abernathy said.

“[Kyle was] way more courageous and headstrong more than I could be … The main thing was how strong he was and upbeat and wanting to push forward and not miss things that normal kids do.”

Metcalf provided the sermon for the evening. He acknowledged that each brick inscribed around the angel held a story.

“Each stone only has a few words in scripted, but each stone contains a story. A story of loss, a story heard, a story [of] pain, a story filled with the questions and yet still, they are stories of hope,” Metcalf said.

As patrons lit their candles, Metcalf commented on how he felt watching the fire against the darkness. He said he hoped the patrons of the event would feel emboldened to share their own testimony.

“It is beautiful to see how, as each one of you light your candles, how a little more of the dark place begins to light up,” he said.

“During this Christmas season and during the coming year let your light shine. Each of you here has a story to tell and I encourage you to share that story and pass on that light.” 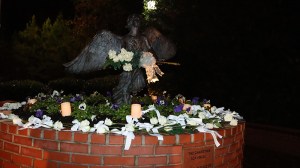 Those that attended the memorial left white roses at the base of the angel statue.