Looking to show off your talents? Head to Local Groundz for their open mic tonight 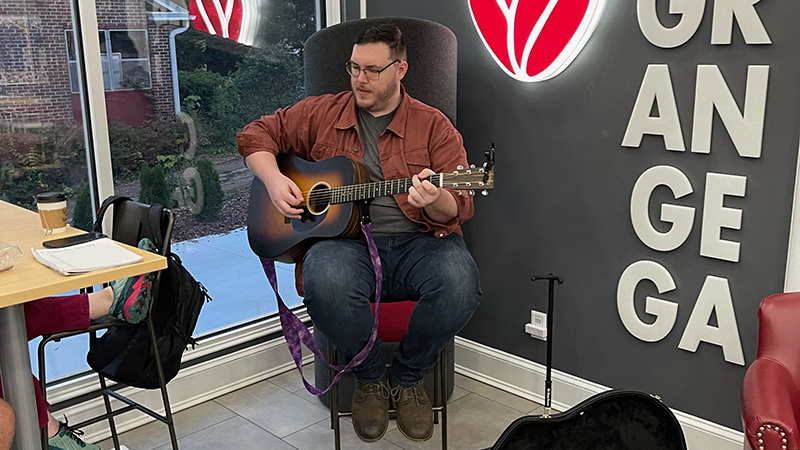 As local artists search LaGrange for a place to showcase their talents, Local Groundz Coffee Company hopes to help.

Every Thursday night from 5 – 7 p.m. the coffee shop located adjacent to LaGrange High School hosts an open mic night for anyone who wishes to perform.

Philip Abbott, owner of Local Groundz, said he hopes to showcase the talent in Troup County.

“We’re looking to showcase local, primarily acoustical talent with a guitar or vocal, and just get people on stage to present to the community in a very intimate setting,” Abbott said.

Nick Bentley, a local artist, works for the event to help monitor and curate the stage every Thursday. Bentley said he was inspired to do this by his own experience as a musician in LaGrange.

“I recently decided to switch over to being like a full-time artist. I called Local Groundz at first to see if they want to do some kind of artists showcase,” Bentley said. “After we sat down and started talking about it, [it] morphed into doing a weekly open mic.”

Abbott said the ultimate goal for their open mic is to allow community members a place to practice and perform.

“What we’re trying to get more of is up and coming [artists] either from high school or from the college that want to interact and practice,” Abbott said.

Chloe Crockett, a Troup County resident, came out a few weeks ago to perform with Bentley. Abbott said this represented what they hoped to achieve.

“She came out and played and they played a duet together and did a really nice session,” Abbot said.

Gauge Bailey, a manager at Local Groundz, said he has enjoyed seeing the open mic nights during his shifts.

“It’s been really cool to see how people are able to come out, relax and hear great music, drink good coffee and just be together,” Bailey said.

Bentley said he hopes to see other artists pursue their endeavors at the open mic nights in the future.

“The local grounds open mic is a place for any level of artists,” Bentley said. “I want them to come and to showcase their creative aspirations and be able to have the first-time experience of sharing [their] art with complete strangers in an environment that is open and welcoming and safe.”