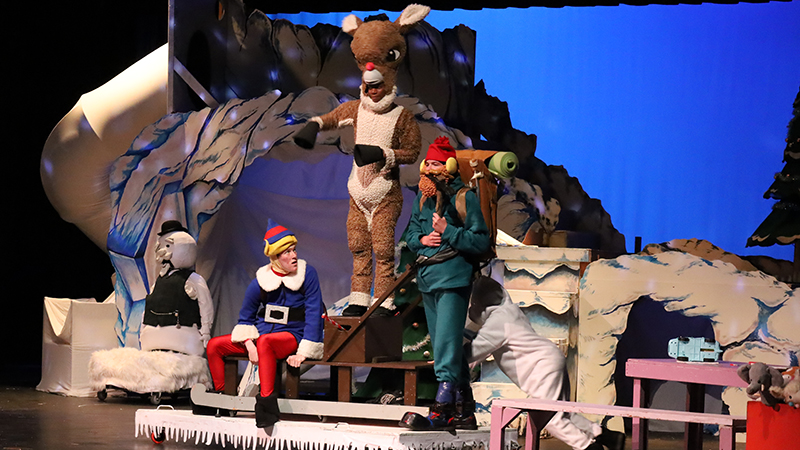 If you thought you saw a certain reindeer with a red nose at Troup High School, your eyes did not deceive you. “Rudolph the Red-Nosed Reindeer” opened on Thursday morning with a showing for elementary schools in the area. The musical will be performed this weekend to the public and is based on the classic from 1964.

Principal Niki Watts said that she was amazed by the performance on Thursday morning.

“I actually saw the performance for the first time this morning, along with the elementary school students,” Watts said. “I stuck around to see the show in its entirety and was amazed, as I always am with the productions that Noel and her students bring to life on the stage.”

Watts said she felt the elementary school students had a lot of fun on their field trip to see Rudolph and his friends.

“The kids had a blast, you could tell. They were actively engaged, they were singing along with the Christmas carols and the Christmas songs that they knew,” she said. “I was pleased to see that they laughed at all the appropriate times, and they were interactive. There are several parts of the performance where our characters get down and interact with the audience and the kids were excited about that.”

Noel Jordan, the director and theatre teacher at THS, said she loved having the children of Troup County see the show before it premieres to the public.

“I always say you rehearse like you perform, so you can’t wait to give me energy when you start performing,” Jordan said. “But there is something wonderful about 500 plus kids laughing about something that no one in rehearsal has ever heard anyone laugh at.”

Jordan said some of her students have never performed for a younger audience and that she was excited to allow them to have that experience.

“There are so many new kids in this show. More than half the cast has never done a show here before. So a lot of new people that this is their first experience with little kids,” she said. “Everyone else who has done shows for little kids before, this is like their favorite thing to do. We’re all very excited.”

Watts said she hopes the production this weekend will be a family affair as Troup County prepares for the upcoming holiday season.

“I would love for this to be a family affair. We’re right here at the Christmas season, everybody’s in the holiday spirit or at least I hope they are,” Watts said.

“I think this is a wonderful opportunity to spend a minimal amount of money to have an amazing experience with your family.”

“Rudolph the Red-Nosed Reindeer” will be continue this weekend at Troup High School.