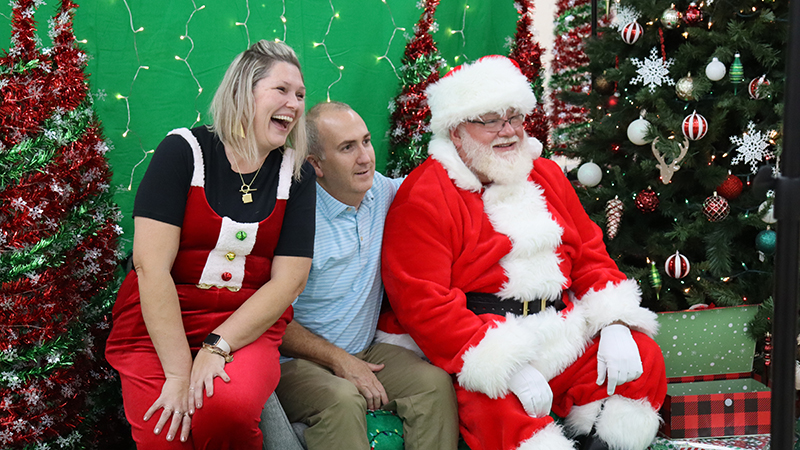 HOGANSVILLE – Santa treated the children of Hogansville to a visit as he attended the annual Christmas Bazaar on Saturday. The event started at 4 p.m. and included vendors from the Hogansville area and Alabama. Santa made his debut around 6 p.m. and listened to the children’s wishes for this holiday season. Children were also given a stuffed animal and candy during their visit.

Jonathan Lynn, Hogansville’s city manager, said he was pleased at the turnout after the annual Christmas parade was canceled last minute due to weather.

“I couldn’t have expected anything better. Given what we had during the day, we wanted to make sure we still had this, and we had already moved it indoors. It just worked out well,” Lynn said.

As for the children of Hogansville, Victorya Weatherspoon said she was very happy to meet Santa in her hometown.

“I met Santa and I had so much fun because I sat beside him. I told him my Christmas list. I was kind of nervous at first, but when I got there, I felt happy,” Weatherspoon said. 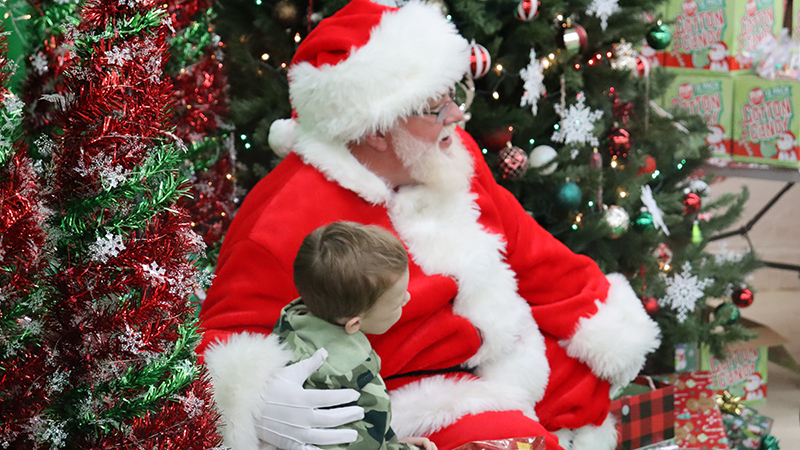 Children of Hogansville told Santa their wishes and were given candy and a toy at Saturday’s event. Above, a young boy poses with Santa after telling him what he wants for Christmas.

“The event was wonderful. We actually stopped by the food trucks and got something to eat.  The food was really good,” Williams said. “We’ve been here since about 5:45 p.m. … We thought the parade was going to come.”

The bazaar allowed for local and small businesses the opportunity to interact with Troup County residents. One Hogansville business owner, Ambriana Roberson, said she was grateful for the opportunity. Roberson owns A. Meraki Styles in Hogansville.

“I’ve been in business for a year and a half. I pretty much sell products as far as earrings, necklace, scars, bracelets, purses. whatever you need, I have it,” Roberson said. “I came out tonight to be around people for the holidays and bring joy and cheer. Also, spread the business’ social network.” 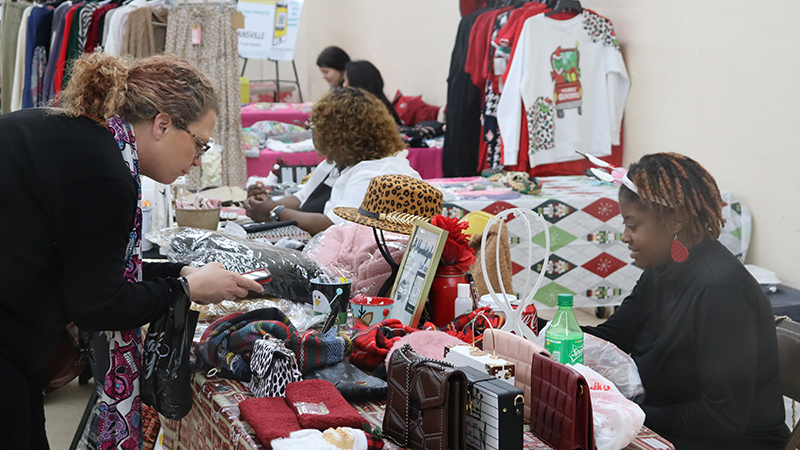 Businesses and vendors were given the opportunity to sell to members of Hogansville, including Ambriana Roberson, right, of A. Meraki Styles.

Evan Schwate, co-owner of Nature in Hand Creations, came in from Atlanta for the event.

“We sell fair trade artwork from impoverished regions. We help support the artists, mostly from Nicaragua, but all of this stuff on this table is from Bethlehem,” Schwate said. “It’s all olive wood. So it’s all handmade. It’s all Christian artisans that we’re trying to support.”

Helping out as Santa was Hogansville resident Bobby Conway. Conway explained his motivation for taking on the role of Santa for the children of Hogansville.

“Before I grew the beard and actually started doing it, I was doing Shop with a Cop for friends of mine in Newnan. There was a little girl that kept come running up to me asking me questions … One of her last questions was, ‘Santa do you bring the tree?’” Conway said.

“I said, ‘No honey, I bring the presents and put them under the tree.’ he said, ‘We don’t have a tree’. Because it’s Shop with a Cop, myself and several [of the] police officers tripped over each other to try to buy this child a tree. We got a child a tree and now every year I have friends buy trees the day after Christmas when they’re on sale. And then today at the Shop with a Cop up, and we gave out five trees to families who didn’t have trees. That was what really started me doing this.”