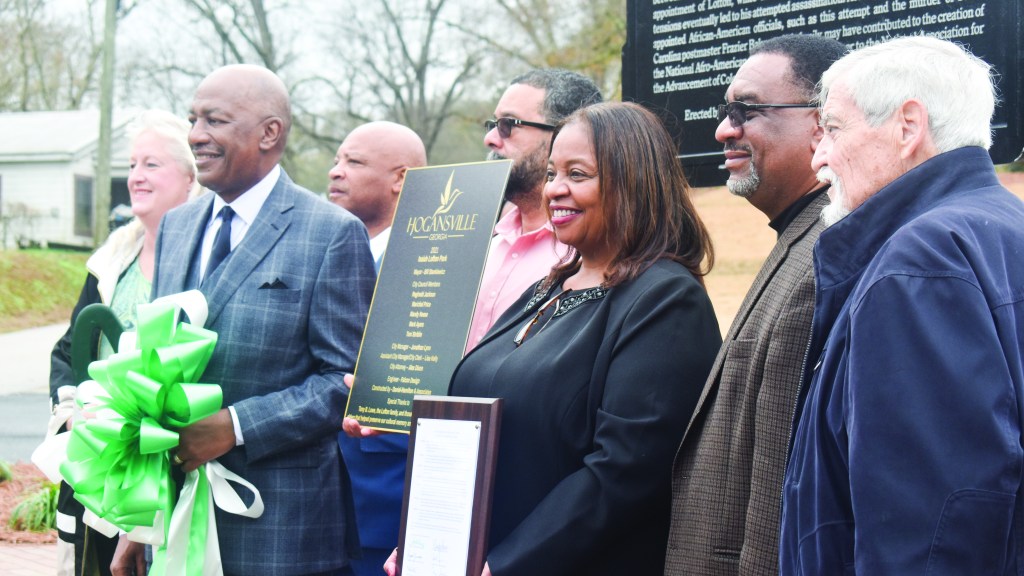 HOGANSVILLE – Charlene Johnson-Brown held the proclamation bearing her great uncle’s name and story close to her. She thanked Hogansville and Dr. Tony Lowe profusely for bringing her ancestor’s history to the light of modern times.

“I heard these stories growing up, but I never actually did anything with them,” she said during the proclamation ceremony at the newly constructed Lofton Park Saturday officially dedicated Sept. 15 as Isaiah Lofton Day.

The day, Johnson-Brown said, celebrates her ancestor’s survived an assassination attempt in 1897. It also celebrates his courage to continue his postmaster duties and continued efforts to advocate for the African American community.

One of Johnson-Brown’s great-grandparents and Lofton’s parents were siblings, making her a grand-niece of Lofton, she said.

On the evening of Sept. 15, 1897, Lofton became the target of a failed assassination attempt by unknown assailants after performing his duties in the post office. It was located in the old black business district, locally known as “Cross Town.”

Per the proclamation, Lofton was pressured into leaving his post following an economic boycott of his office and violence. However, he refused and his rebellion became a major event. It is widely memorialized across the state and natio 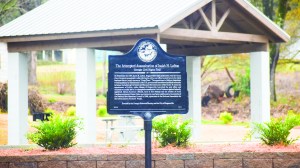 n in over 100 newspapers across the country.

Lowe, an associate professor at the University of Georgia, conducted personal research on Lofton after hearing his story from elders in the Hogansville community, he said.

His family lived on the plot of land which the City of Hogansville constructed 55 years ago.

“Our house caught fire and we moved, but it was amazing that when I found [Lofton’s] story, it brought me back where we lived,” Lowe said.

“That’s not something you can plan, it just happens.”

“The stories [the elders] left something with me that I was responsible for,” Lowe said.

“This is a story of trauma, of his family and of the trauma inflicted on the community of Hogansville. Those elders held onto those stories and passed it on. The trauma was still there.”

Lowe noted that Lofton’s story was about triumph for him and the Hogansville community.

“This is about a city who’s taken a small step forward and tries to address and recognize [that trauma] in a very concrete way,” he said.

“Other communities have had similar traumas, but they don’t make these kinds of efforts. It pushes us forward by putting light on it.”

Lofton’s attempted assassination is recognized by historical scholars as a contributing factor to the organization of the National Afro-American Council in 1898.

This council was the forerunner of the National Association for the Advancement of Colored People in 1909, the nation’s oldest civil rights organization.

Lofton went on to become an advocate for African American rights. This included voting and engaging in civic governance. The administration of the United States’ 25th president, William McKinley supported this.

He eventually moved to Washington D.C. and had seven children. Johnson-Brown said, to her knowledge, none of Lofton’s children had children of their own.

Johnson-Brown’s mother and grandmother have already passed, but she said they would have been immensely proud of Lowe’s work and the city of Hogansville for honoring Lofton.

“I’m hoping this empowers a lot of the youth here in Hogansville to see that we all matter,” she said.

“We’re a small town, but that’s no limit other than the sky. I hope this is a living testament to me and David.”

David Smith is a distant cousin of Johnson-Brown. The two were introduced through Lowe as he conducted his research. Smith had already begun researching his ties with Lofton.

“My interest in a lynching in Palmetto, Georgia peaked my curiosity because it involved a maternal relative,” he said.

The incident was documented in a book, “What Virtue There Is in Fire” by Hogansville author Edwin Arnold. It referenced Lofton’s assassination attempt.

The name Lofton instantly sparked Smith’s interest as it shared with his own great-grandfather’s name, Benjamin Lofton. Through his own research, he discovered his grandfather and Lofton were brothers, and that Lowe was researching his family.

Johnson-Brown and Smith said their families are scattered throughout the country, and they were the only two direct descendants able to attend the proclamation ceremony.

“This is a monument that can stand in the city of Hogansville and continue all that storytelling from our ancestors,” Johnson-Brown said.