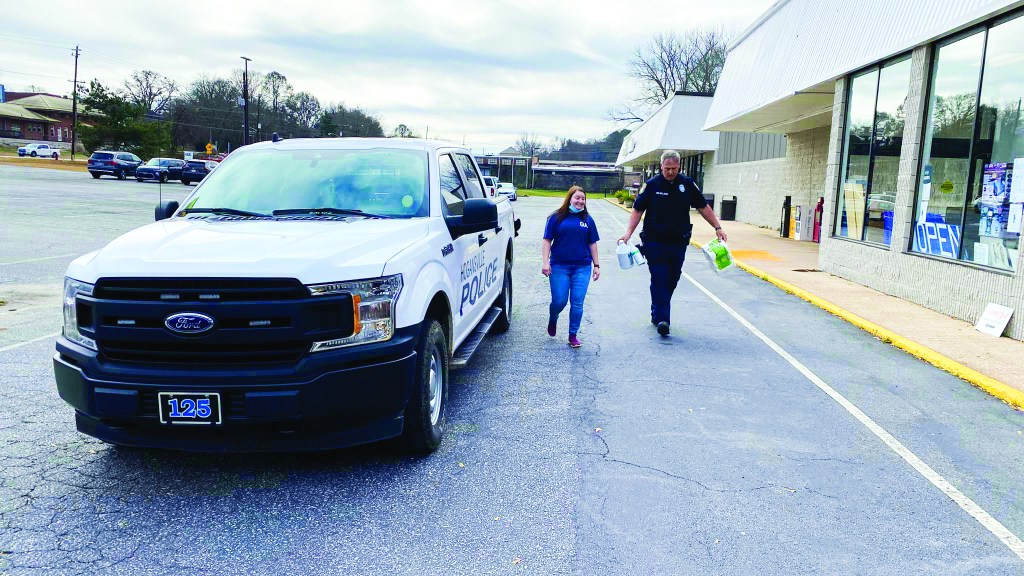 HOGANSVILLE – West Kentucky experienced unimaginable devastation this month as record-breaking tornadoes ripped through the state, causing millions of dollars in damage and leaving hundreds to pick up the pieces a mere week before the Christmas holiday.

This devastation has been felt at home in Hogansville, where businesses, city officials and the Hogansville Police Department banded together to help with relief efforts.

Andrew Denton, co-owner of Georgia Wholesale Co. in Hogansville, initiated the campaign after seeing the aftermath an EF-4 tornado caused when it hit western Kentucky on Dec. 10. Denton and his family have ties to the state, making the campaign personal.

“We’re [originally] from Kentucky,” Denton said. “They’re less fortunate having to go through this right at Christmas.”

The target for Denton’s first round of assistance is Mayfield, Kentucky. In the last week, he and his family have collected pallets of bottled water, canned food, diapers, toiletries and other supplies that he planned to pass out to Mayfield residents during a seven-hour trip on Friday. As other community members caught wind of the Denton family’s plans, they started finding ways to help.

The City of Hogansville gave the Hogansville Police Department several gift cards to purchase items like flashlights, batteries and diapers. The gift cards were meant to be rewards for the float winners of Downtown Hogansville Christmas Parade last weekend, Hogansville City Manager Jonathan Lynn said, but the parade was canceled.

“We couldn’t figure out a better way to use them other than to buy what ever [HPD] needed,” Lynn said. “We’re very lucky here, and we have been during the last several weather events.” Lynn said.

HPD also donated several boxes of food it had stocked from its yearly food drives, according to HPD Chief Jeff Sheppard.

“We’re fortunate that we didn’t get the worst from the storms that went through here,” Sheppard said. “They’re our neighbors and that’s what we’re here for.”

Sheppard said HPD will be scheduling an emergency blood drive in the near future in response to the tornadoes.

Penny Willingham, owner of Hometown Quilt Shop, summoned some of the area’s most skilled quilters to put together as many as 20 quilts and about 100 pillowcases to send to Kentucky on Denton’s next trip. They are also planning to make many more.

The quilt shop traditionally makes quilts and other items for nursing homes and other entities in the area as part of their community-outreach projects. They regularly make quilts to give to the HPD for emergency situations and were reached out to by Sheppard to see if they could spare more. Soon, Willingham had not only her local quilters on hand, but others from areas like Newnan who stepped into to make more quilts.

“These are community quilts that we make [when] things happen in the community,” Willingham said. “This isn’t quite our community, but they’re going to [Kentucky.] That’s what God sent us here for.”

As of Friday, as many as 77 people are confirmed dead from the Dec. 10 tornado and at least one person is still missing. Twelve of the dead are children.

According to the preliminary report from the National Weather Service, there have been 59 confirmed tornadoes as of Dec. 16. The most significant damage occurred in Arkansas, Tennessee, Missouri and Kentucky.

Holly Winner, executive director of the Central Midwest Georgia Chapter of the American Red Cross, said in an email Friday that more than 450 trained Red Cross disaster workers from all over the country are helping those in need in the affected states.  As of Wednesday night, there were 14 Red Cross and community emergency shelters open in the hardest-hit communities in Kentucky, Tennessee and Arkansas providing safe refuge to more than 550 people- the majority being in Kentucky.

“In Georgia, our team has deployed or has on standby to deploy, 6-10 volunteers,” she said. “They are or will be serving in Disaster Spiritual Care, Feeding, Damage Assessment, Community Engagement and Partnerships, and Elected Official Liaison roles. Most of the disaster operation supplies have been pulled from the nearby warehouses, but our Union City warehouse is on standby if our disaster trailers need to take more to the sites.”

The Red Cross is not accepting donations of food, household items or clothing- as they cannot be distributed by our teams. Right now, financial donations are the quickest and best way to get help to those who need it most and give volunteers flexibility to purchase what they need, Winner said.

Denton said Friday’s trip will not be the only one he will make.