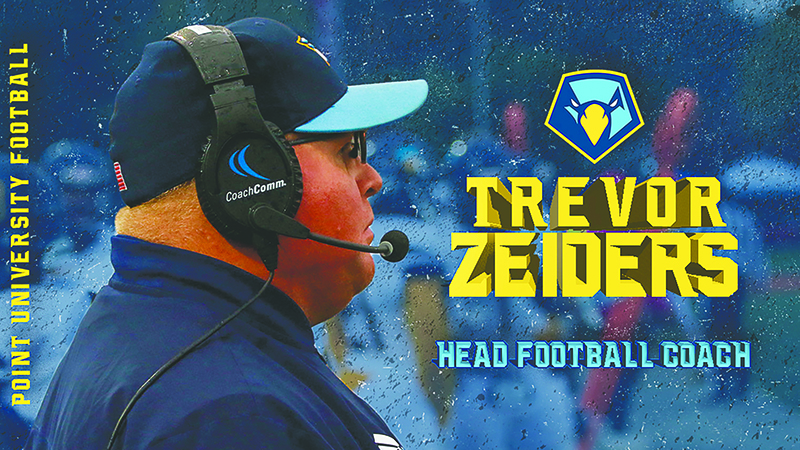 WEST POINT — Trevor Zeiders, who has served as the defensive coordinator and recruiting coordinator for the Point University football team for the past two seasons, has been named the program’s next head coach, Point Athletic Director Jaunelle White announced Monday.

“It was apparent to the search committee that Coach Zeiders has the drive, determination, and grit to lead our football program,” White said. “God has assigned him to continue our pursuit of excellence by creating an environment rich with love, respect, and discipline for the young men we serve. I am excited about the future of Skyhawk football.”

Zeiders becomes the fifth head coach in the program’s history.

In his first season with the Skyhawks, Zeiders led Point’s defense to several national rankings and oversaw several players earning Mid-South Conference All-Conference status. The Skyhawks ranked 36th nationally in total sacks (16), and individually, Chase Turner was No. 1 in the nation in interceptions (6), and Aaron Anderson ranked 24th in tackles per game (9.4). Turner’s efforts earned him first-team All-American recognition.

This past season, Zeiders oversaw freshman Gabriel Jacon-Duffy’s breakout season as a starter on the defensive line. Jacon-Duffy finished the season No. 1 in the nation with 13.0 sacks. He also accumulated 21.0 tackles for loss, two forced fumbles, 34 solo tackles, 23 assisted tackles and averaged 5.2 tackles per game. Jacon-Duffy’s efforts earned him honorable mention on the 2021 AFCA NAIA Coaches’ All-America team.

Prior to joining the staff at Point, Zeiders was the head coach at Cincinnati Christian University. He was on staff at CCU since the beginning of the football program and took over as head coach in 2018. Before the university shut down in 2019, Zeiders had a head coaching record of 2-19.

During his campaign at Urbana, coach Zeiders was the associate head coach of football operations and special teams coordinator. Urbana picked up a school record for most wins in a season (8) and were conference champions in 2011.

Before that, Zeiders was the defensive ends coach and recruiting coordinator at Dayton, where the Flyers posted a 19-3 record over his two seasons with the University.

While at Carson-Newman College in Jefferson City, Tennessee, Zeiders earned his master’s degree in education while being named the assistant linebacker coach and video coordinator. He also served as the defensive line coach at Frostburg (2004-05) and Gettysburg (2001-2003).

When asked what he is looking forward to the most as he begins this position, Zeiders says that he is excited for the opportunity to lead men in growing in their faith, their academics and their athletics.

“My goal is to help these men find a commitment to excellence and to grow as individuals within a team that is a family, and to prepare them for the challenges that they will face as they graduate from college and move on into the real world to make a difference for the Lord,” Zeiders said.