Mrs. Claus made two special appearances in Troup County on Wednesday, once at 11 a.m. and again at 4 p.m. Children from across the county joined her for “Snacks and Stories with Mrs. Claus.” This involved singing, reading and cookie decorating at 525 Park Avenue where the LaGrange Memorial Library is temporarily located.

Carol Cain, who took on the role of Mrs. Claus, said she felt pure joy when performing for the children.

Kate Chambers, director of youth services for the library, said she was surprised by the amount of people that showed up for the 11 a.m. event.

“This was so many more people than I thought we would have … I planned for 50 across morning and afternoon. We had 55 this morning, so we’re going to have to make a snack run,” Chambers said. “If that’s a problem I get to have, that’s the best problem to have.”

Chambers said she has seen a decrease in community members coming to the library’s in person events.

However, she said saw a lot of new and old faces during Wednesday’s event.

“Everybody seemed to have a great time. The kids enjoyed their cookies, and they always enjoy Mrs. Claus.”

As for Mrs. Claus, Cain said she had a lot of fun creating the Mrs. Claus character for the children of Troup County.

“[The library] asked me about being Mrs. Claus,and I’d never been Mrs. Claus. I said, ‘Sure. Why not?’ I went out and invested in the wig,” Cain said.

“The dress was my sister’s, and I found the little apron.  I just started having fun [getting] into costume.”

Cain said she makes an intentional effort to change her performance every year, so it is still new for the kids. After the first few years, she added jingle bells to the performance.

“Eventually after a couple of years, I added the jingle bells. Every year, I tend to buy new books because I don’t want to do exactly the same thing,” Cain said.

The North Pole practiced safety measures at the library as well. Cain made sure to tell the kids the jingle bells were cleaned prior to handing them out during her presentation.

“For safety’s sake, I’ve already sprayed these down with Lysol,” Cain said. “The other part of this is don’t put them in your mouth. Lysol does not taste good.” 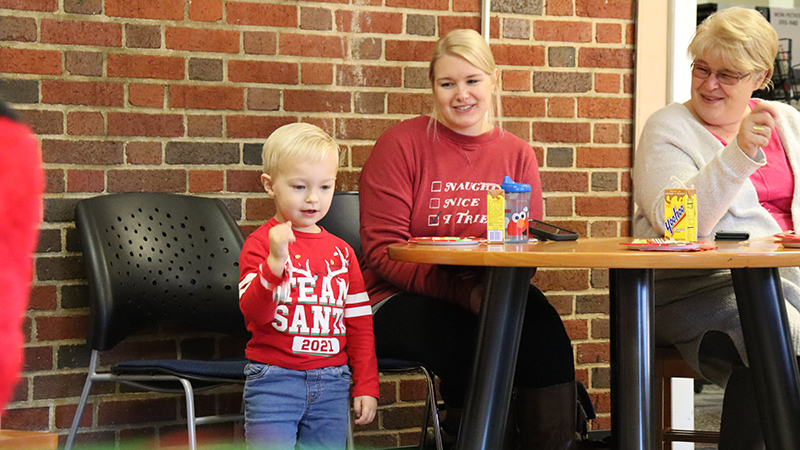 Amber Cook, a parent in attendance on Wednesday, said she had a lot of fun at the event with her son, Owen.

“It was a lot of fun, very energetic. We just enjoyed our time with Mrs. Claus and with other friends,” Cook said.

Cain said she is on a personal mission of making the library a welcoming place for all children in Troup County. Cain’s childhood sparked her motivation for this mission.

“As a kid, for me, the library was actually a little bit of a scary place because you had to be quiet,” Cain said. “It took a long time for me to realize the library could be a fun and welcoming place. And so I’ve made it my mission to say when I go to the library, it’s going to be fun and welcoming.”

If parents want to get more involved with the library, Chambers said she recommends parents follow their events via Facebook or their website. They have many reoccurring events as well as seasonal ones.

“Our two biggest things are our weekly story time, which is ages three to five or six. Then we have baby time on Thursdays, which is birth to about age two,” Chambers said. “Those are the two consistent things for parents to bring their kids to. Then, we’re doing winter reading right now. We have at least one big in person event each month.”

If children were unable to make it to see Mrs. Claus, Cain said she has a special message from Mrs. Claus and Santa.

“Santa knows exactly who they are. Santa already knows their list and their wishes. Even if they didn’t get to come today, Santa is well aware of what they want. He has a good handle on who has been good and who has been naughty,” Cain said. 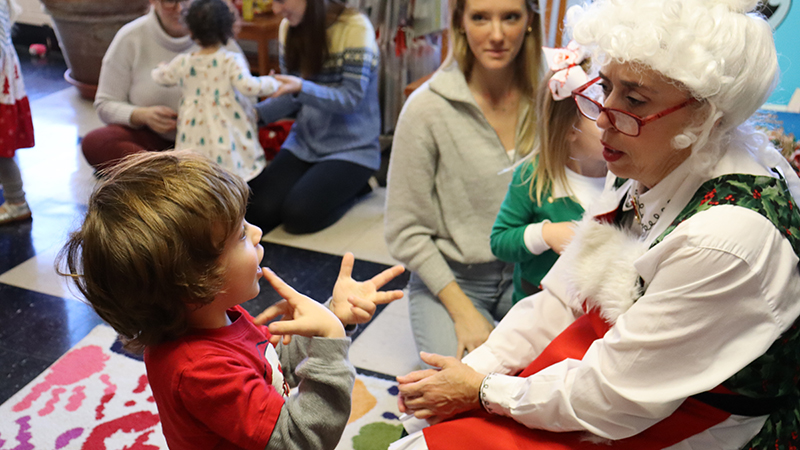 Mrs. Claus listened to each of the children’s wishes and made sure to relay the message to Santa after leaving. (Photo/Iris Hersey)