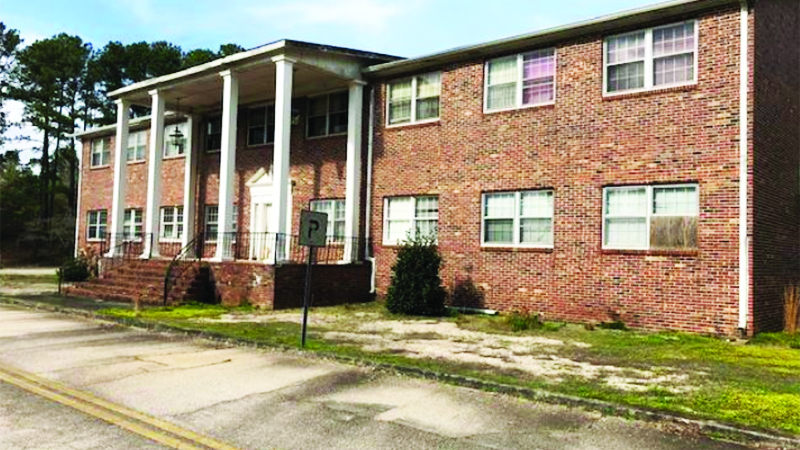 Several local nonprofits are working to create affordable housing for transitioning veterans in Troup County and are planning to rehabilitate a historic building for the project.

Sandra Brownlee, a 27-year retired Master Sgt. of the United States Army and the founder of DSPII, approached the Troup County Board of Commissioners at its Tuesday morning work session to ask for assistance with the $24,000 needed to reconstruct the building’s decaying roof. DSPII also needed to work out a lease agreement with the county for the building as it is county-owned.

“The idea is that we’d have some kind of long-term lease agreement with them pursuant to the state,” Commission Chairman Patrick Crews said. “We’ve got to make sure that the building is being used for a non-profit type of operation.”

Though the building is county-owned, it was built with state funds. It has been used by several entities in the last three years but has otherwise remained empty and is slowly deteriorating.

“The restrictions are that if we were to ever sale that property, we would have to provide some sort of portion back to the state for their proceeds,” Mosley said. “Otherwise, that building has to be used for a public purpose.”

However, the building has several rooms suitable for housing and DSPII’s veteran services, said Jennifer Corcione, board secretary of DSPII and executive director of CAFI.

To fund the project, CAFI will partner with DSPII to fund the housing site’s operations and will enter a joint grant writing process for a state fiscal recovery grant through the governor’s office, Corcione said.

“Just DSPII’s portion is $969,000 to not only help renovate the building but to help its operations for four years,” she said. “We’re also working on some other [community] grants through Home Depot, and we regularly receive donations. We’ll also be receiving some donations through [Veterans Affairs].”

DSPII operates a WayPoint veterans center in Griffin as well.

According to the project’s description, the project will consist of complete renovation, energy-efficient and LEED Certified green beautification and complete restoration into a multipurpose facility.

On top of mental health and job-seeking services, DSPII plans to offer financial literacy courses through CAFI and small business training to push a Boots to Business programs for veterans who many want to become business owners. Veterans who are transitioning out of the service will rent from the center for 18-24 months as they readjust to their respective communities. The project calls for 17 mini suites priced at $450 per month, bringing in $91,800 annually to the center, which will fund its operations.

Brownlee, a LaGrange native who still lives in Troup County, voiced her own experience with finding adequate housing and services when she retired.

“I left the service in Atlanta, and I stayed in Atlanta … because I had more access to services than I did in a small town like LaGrange,” she said. “Because of that, I realized I’m not the only one who might be going through this opposition of trying to find out what services are available to them and having to seek them out.”

“When you’ve been trained to do things a certain way for so long, it doesn’t always fit into the new community that you go into,” she said. “You deal with things like Post Traumatic Health Disorder, mental health, soldiers who are homeless or on the streets or on drugs, all these things that we experience every day.”

The project’s roof renovation is slated for completion by February, and to ultimately have the site up and operational by February 2023.