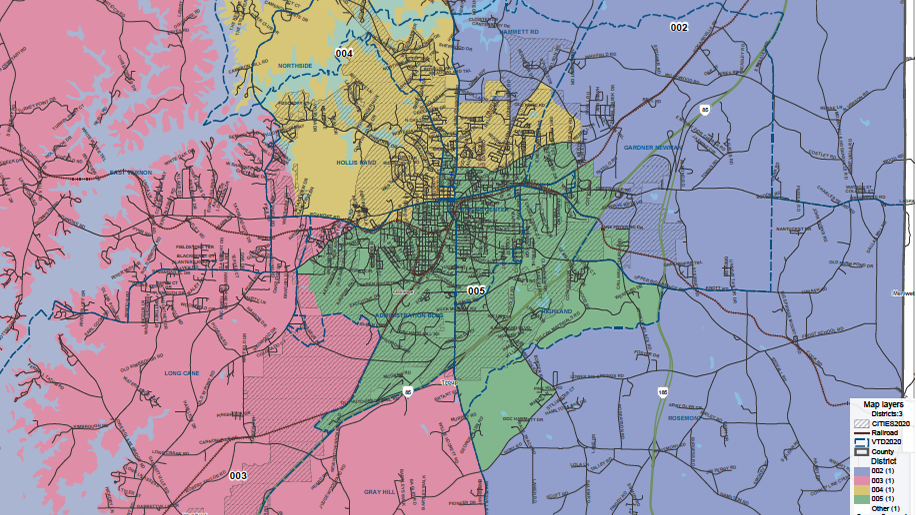 The Troup County Board of Commissions agreed through a resolution to reapportion the county’s five districts in order to ensure accurate representation for Troup County and is based on the 2020 census data.

County Manager Eric Mosley said the resolution allowed the commission to accept proposed re-drawings and revisions of the Troup County districts and boundaries necessitated by the 2020 Census. Reapportionment is required every 10 years following a census.

“The districts that have population density such as LaGrange, West Point, [and] Hogansville, obviously, they’re a lot tighter,” Mosley said. “They helped us redraw our maps to ensure that we had consistency among the voting populations and that they were properly represented.”

As part of the reapportionment process, the county needs to equally divide its districts into 17,000 people in each district.

During Tuesday’s work session, Mosley said that the 2020 census reported a small increase in the county’s population.

“No more than 3,000 people were added to Troup County’s population,” he said.

With the resolution’s approval, it will now be sent with Georgia State Representative Randy Nix, who agreed to carry the resolution to the state for eventual approval by the governor, Mosley said.

In other business at the meeting, the commission approved Blackwell’s Inc. for the exterior renovations at the Juvenile Court Building at 118 Ridley Ave. The board approved $78,000 and the work will include things such as cleaning the exterior of the building, fixing the limestone mortar joints, and making sure all other areas are protected as the renovations occur.

The board additionally elected Commissioner Lewis Davis as vice chairman of the board.