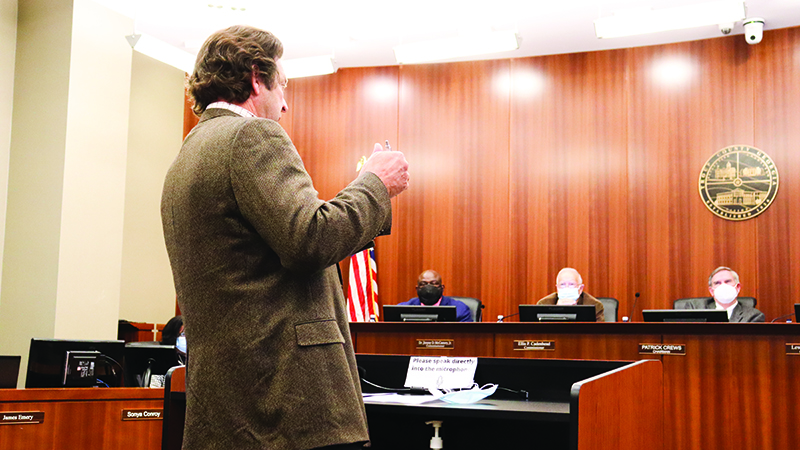 The Troup County Board of Commissioners held a public hearing Tuesday on possibly abandoning Bright Star Church Road — a dead-end county road located just outside of Pine Mountain. The topic has been discussed several times over the last few months due to the public’s vested interest in a cemetery on the road.

MAC Family Farms, LCC, who owns property near where the cemetery sits, brought new information to the discussion and issued a new request to only abandon the portion of the road that is one foot past the cemetery. MAC Family Farms, LCC, has a parcel of land directly connected to the road and another parcel above it that is not connected to the road.

“The change is that [the landowners] were no longer requesting the abandonment of the entire road,” he said.  “They were only requesting the abandonment of the last little portion of the road past the cemetery, about 400 feet. That’s the piece of it that I think was quite unexpected. It just kind of evolved in the conversation during the meeting.”

John McLemore, who represented MAC Family Farms, LLC, said the turnaround he was suggesting would wrap around the cemetery and be located on his property.

County Attorney Jerry Willis suggested for the board to table the proposal until a later date so that McLemore could present proper sketches and how the turnaround would affect the public and private land in the area.

“It’s a slippery slope we’re going on here,” he said. “We can’t put our crews on any kind of private property. However you make it work out, it has to legitimately be on public property.”

The board ultimately agreed to table the suggestion until its April 5 meeting.

Emory announced Tuesday that the county has since learned that all seven trustees are deceased.

W.T. Edmondson, LaGrange City Councilmember for district two, spoke to commissioners in place of many of his constituents. He said he hopes the commissioners will consider keeping the road open for good.

Edmondson said he does not want Bright Star Church Road Cemetery to suffer the same fate as other African-American cemeteries.

“We’ve had so many African American cemeteries that have been denied access over the years. That is a problem,” Edmonson said. “That is a red flag because they don’t want another cemetery that is not accessible.”

Emery said through his research, the road has gone through at least three name changes.