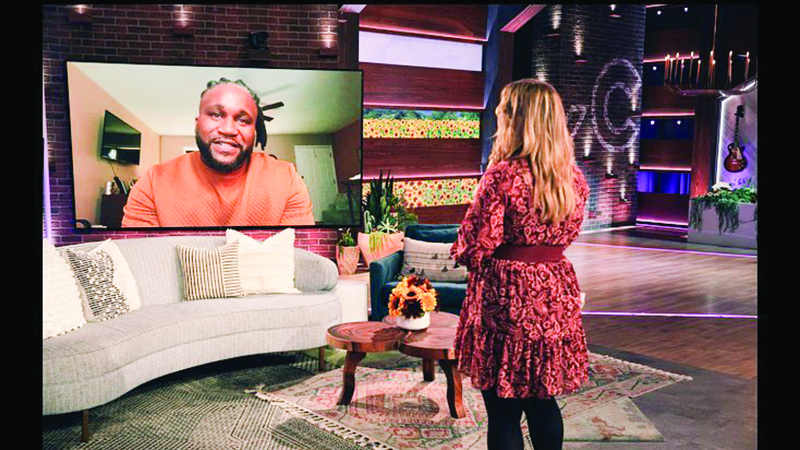 Now, he has been featured on several platforms from ABC News and recently, the Kelly Clarkson Show, gaining publicity that he hopes will assist him with bringing more awareness for his program.

Talley’s appearance on the Kelly Clarkson Show aired Thursday morning and again at 5 p.m. Thursday afternoon. In the segment, Talley relayed how he started $1 Thursday and its impact on the individuals he has helped. The show can be viewed locally on WSB 2 or WSBDT 32. The episode Talley was featured on was filmed on Nov. 11.

“We started out on how $1 Thursday started, which was when I spoke to a high school friend who had fallen on hard times, and it spilled over into the things I’ve been able to do so far,” he said.

Talley, a father of two, began the program in 2017. Since its founding, he has earned thousands of dollars that has been used to help individuals in various situations, such as paying their medical bills and recovery from house fires. Talley also funds other projects, such as supplying free ice cream for children and fruit baskets for teachers in the Troup County School System.

One of his most recent efforts has been to assist a local family with gaining a headstone for their deceased child who passed in August. His goal is $1,000 for the family and so far he’s gained about $450.

“They had the burial, but they don’t have the headstone yet,” Talley said. “They said they wanted to put a lot of details on the headstone.”

Talley said he knew the pain the family was going through personally.

Talley lost two children within five years of each other: a daughter in 2005 and a second in 2010. The loss subsequently led to a divorce between him and his wife. At the time, Talley was raising his then 8-year-old son. But around 2014, God seemed to smile on him, Talley recalled.

“He put me in a new house, and shortly after I was not only able to buy that house, but my wife came home and we were able to hash out a few things,” he said. “Then, God blessed us to get pregnant. She survived and is very healthy, and she has a birthday coming up in a few weeks. She’ll be nine.”

Since his ABC News segment, in which he was featured on the show’s “American Strong” segment, Talley has been reached out by other platforms, he said, and it is his hope that his appearance on the Kelly Clarkson Show will garner more attention for his program.

“On Saturday, I was published in a magazine called Womans World, and through that I started getting text messages from people in New Orleans and South Carolina who are very interested in what I have what I have going on,” he said.

“So, to be on aired on [the Kelly Clarkson Show] I believe will catapult what I’m doing into everybody’s home.”

Donations to $1 Thursdays can be received via Cash app at $AnthonyMauriceTalley or Venmo at @Anthony-Talley-9. Talley makes updates on the project regularly on his personal Facebook page, Anthony Talley, and on his $1.00 Thursday LLC Facebook page.