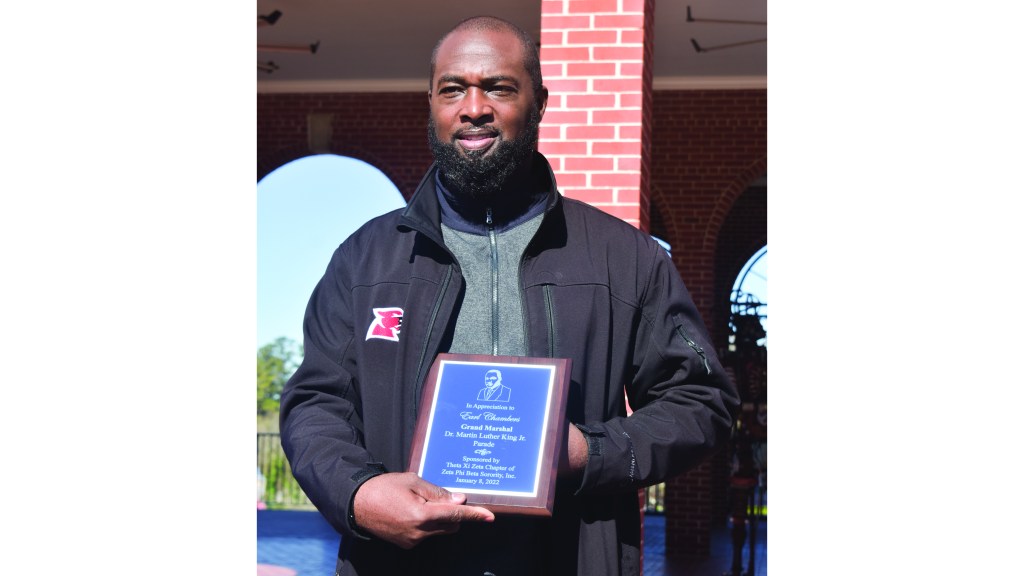 Saturday afternoon presented bright and moderately cool weather, a perfect formula for the planned downtown LaGrange Martin Luther King, Jr. parade. However, the parade was canceled last week due to COVID-19 concerns, leaving both its planners in its Grand Marshal, Earl Chambers, disappointed.

Still, the parade’s sponsors, the Theta Xi Zeta chapter of Zeta Phi Beta Sorority, still saw the day as a celebration, and chose to present Chambers, the head football coach at LaGrange College, with the traditional Grand Marshal’s plaque, honoring him for “exemplifying the characteristics of Dr. Martin Luther King Jr.”

“Intelligence, self-confidence and determination were the three things that we looked at when determining who would be our grand marshal,” explained Eldra Gilliam, chapter president of Theta Xi Zeta, outside Sweetland Amphitheatre Saturday afternoon where the parade would have started.

“Coach Chambers has exemplified the characteristics of being a great leader. It takes a great leader to be able to coach a culture of young men of different races, characteristics and personalities … and Coach Chambers has persevered in many ways. We know that one of the greatest strengths of Dr. Martin Luther King was his perseverance because he persevered up until the time of his death.”

Chambers thanked the sorority for the honor, noting his wish to continue serving not only his players, but the LaGrange community as a whole.

“This is my eighth year in LaGrange, and I’ve really come to consider this place home,” Chambers said. “I want to be a good servant of this community, and whatever I can do to enhance what’s been going on here for years, I want to be part of it.”

Chambers was named LaGrange College’s fourth head coach in 2018 and previously served as the assistant head coach and defensive coordinator. Prior to moving to LaGrange, Chambers coached football at the University of Georgia and Valdosta State University.

Chambers said he’s planning for his players to live up to a standard at LaGrange College.

“I’m always looking for not just good players, but good people,” he said. “There’s a standard we’re looking for. We want players who exemplify everything we want a Panther to be. They’ve got to meet our expectations.”