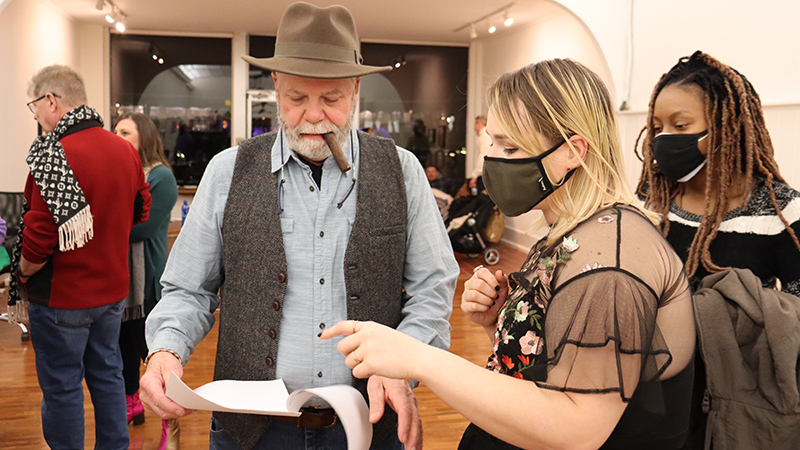 The Cochran Gallery hosted a gallery opening for its new exhibit on Saturday. The gallery hosted works from six artists, the youngest being 23 and the oldest being 30 years old. The exhibits are currently on display to the public and available for purchase. The exhibit is called “Body (A)part” and includes several different forms of art including prints, paintings and sculptures.

Wes Cochran, owner and curator of the gallery, said he was impressed by the turnout for Saturday night’s event.

“It’s just fantastic to have this turnout and expose these young artists. I’m sure it’s not their first time to have a show, but it’s early in their career,” Cochran said.

“We need all the support we can give them.”

Cochran said he tried to find artists who are local or in the region for this exhibit.

“We do try to showcase local, regional and sometimes nationally known artists. That’s what we like to do. These are pretty local, pretty close to us,” Cochran said.

Miranda Fortenberry, a citizen of LaGrange, has her art showcased as part of the exhibit. She said her pieces represent her struggle with both her own mental health and how society treats the human body.

“It didn’t start off like that. It started off with this fascination with society and itemization and how we treat it, especially in 2022,” Fortenberry said.

“I read a lot of sociology papers and published works by people that are in the social learning field. I learned about this screwed up relationship between body and society.”

Joshua Newbend, another artist in the exhibit, said he worked on creating sculptures that could stand on their own.

“I really enjoyed the idea of it and kind of played around more and made more conscious decisions of what to do with them,” Newbend said. “Eventually, I started to make these kinds of forms where they were just on their own, able to be themselves.”

Cochran said he feels the pandemic impacted both those who make art and those who consume it.

“I’m sure more people have had time for reflection and thinking about art, maybe more so than ever. I know it’s worked that way for artists,” Cochran said. “As far as the museum or gallery-goer, [it] may have changed the way people look at it.”