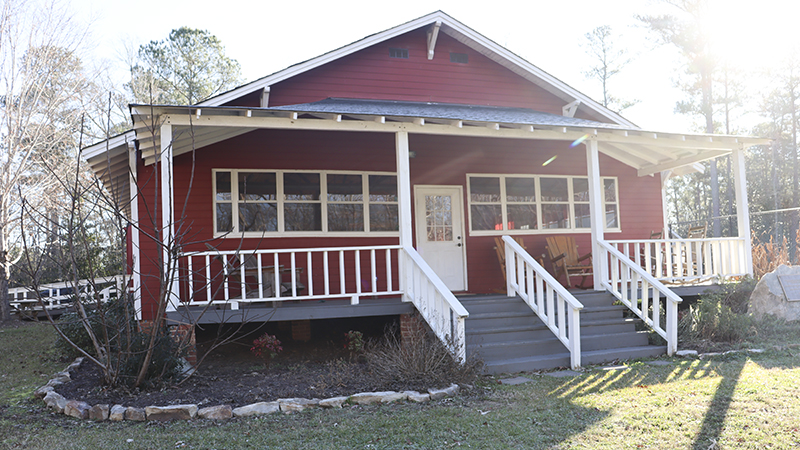 On Saturday, members of the Troup County community said goodbye to a fixture at Camp Viola.

The camp’s multi-purpose room will be torn down and replaced with a new, structurally safe building. The new building will include bathrooms, an updated kitchen and bedrooms.

Camp Viola offers summer camps that allow children to experience various outdoor activities and religious teachings. The red multipurpose building is often the first to be seen when campers and staff first enter the grounds. Many community members have worked for the summer camp and have their own attachments to the structure.

Kevin Stringham, a member of the board of directors, said he is sad to see the building torn down, but he believes the vision of the founder of Camp Viola, Viola Burks, was much larger than a single structure.

“I don’t think her vision was tied to a building, her vision was tied to meeting the needs of the kids in the county. This building is not going to last 100 years. It wasn’t built to last like that,” Stringham said. “We have to keep an eye [on] the future. The important thing is that we’re able to bring kids out here [and] get in that camp experience.”

Stringham said the updated building will feature several needed enhancements for both the campers and staff.

Stringham said if community members want to be involved in helping Camp Viola with the new building they can donate or contribute their time to the camp.

“We’re still raising funds, and that’s the biggest deal. We’ve got a lot of monthly donors in the community that give,” Stringham said. “They can also plug in with their church and come out and work a week of camp. We have hundreds of volunteers that run through this camp, through over the course of the summer, who just come and give up a week.”

Stringham said he understands the sentimental side of the building and is glad members of the community were able to say goodbye.

“We had people from the community who were here, and it allowed those people who felt like they needed to take pictures or to say goodbye to [the] building,” he said. “When you’ve lived a lot of your life in a place, you have an attachment to it. [We] just kind of gave people an opportunity to have one more time to look at it because it’s coming down soon.”