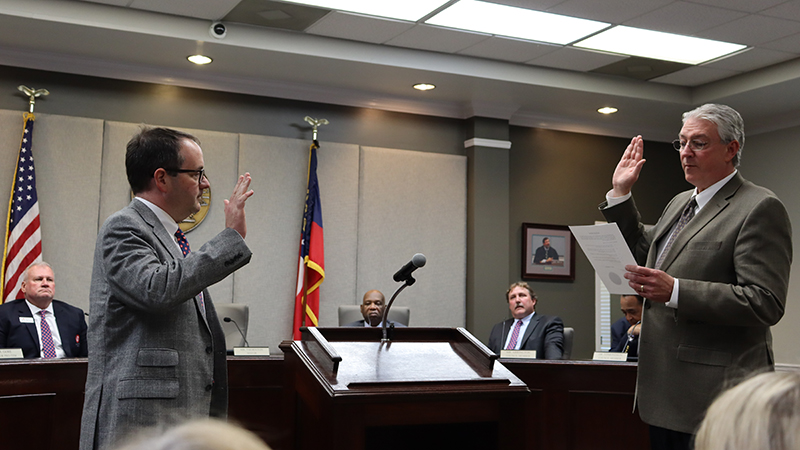 Mayor Jim Thornton and councilmembers Nathan Gaskin, Tom Gore and Jim Arrington were sworn in during the meeting. LaGrange City Clark Sue Olson was appointed to the LaGrange Troup County Memorial Park Board and Willie T. Edmonson was appointed as mayor pro-tem.

Thornton thanked the citizens of LaGrange for his re-election and said he is honored to continue to serve the city of LaGrange.

“I would like to thank the citizens of LaGrange who have entrusted me as mayor of the city for the past eight years, and have honored me by allowing me to serve for an additional four years [in] my third term as mayor,” Thornton said.

Thornton gave his gratitude to his family and the six city council members who serve alongside him.

“A word of thanks to the six men sitting up here with the members of the council with me. This is a great group. I think it’s worth noting that we really all like each other. We get along with each other. We laugh together,” he said.  “In this very divisive political climate, from the state level, federal level, communities all across the nation, there is so much division, so much animosity, so much distrust. It really inspires me and it makes me feel very grateful to live in a place like LaGrange where the seven of us get along as well as we do.”

Gaskin thanked his family for their support and the city staff who helped him manage his first term. He said he is grateful to the city of LaGrange for reelecting him.

“In the past four years, I’ve learned so much from the city staff. I’m just very grateful to them for sharing the knowledge that they have with me,” Gaskin said. “On a personal note, these past four years probably have been the best of times and the worst times of my life. I’m grateful to this community [and] to my family for standing with me. Thank you so much.”

Gore said he thanks everyone involved in helping support the LaGrange City Council. He said he still remembers what inspired him to get involved with his city.

“Thank you to all those who support us and our service to the city. [The city staff] does make our job much, much easier and helps us in so many ways that the average person doesn’t know about,” Gore said.

“We used to sit around the dinner table when I was in high school talking about the sewer system. Not something that many people sit around and talk about at dinner. But it gave me the interest and knowing to be involved with the city.”

Arrington thanked his family and fellow councilmembers for their support and said he looks forward to the next four years on city council.

“I just want to say thank you to my family for standing behind me these past four years and in this election where I got re-elected,” Arrington said. “I’m looking forward to seeing what we can accomplish. I do thank each and every one of you guys, in that leadership role. I look up to each one of you for different reasons.”

Olson said she will be in charge of managing the square in her new role with the LaGrange Troup County Memorial Park Board. This is similar to the work she already does with LaFayette Square.

“If anybody wants to use the square now, they come to me. I keep the calendar. I make the reservations. I make sure all the rules are followed,” Olson said. “The council felt it was appropriate for me to be in that position since that’s basically what it is: managing the square.”

Several members of the council and city staff were reappointed to their positions last night. This includes: 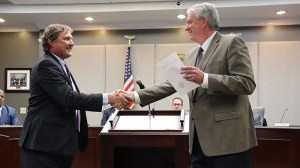 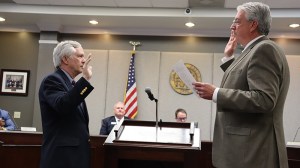 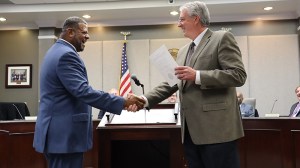