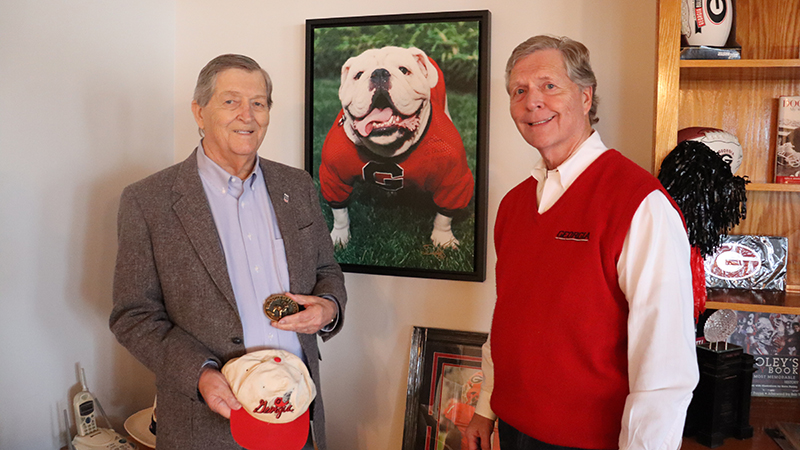 Left, Bob Knight, and right, Dave Knight posed in front of the memorabilia they acquired through the years. (Photo/Iris Hersey)

University of Georgia fans of Troup County rejoiced on Monday as their team won the national championship. For two brothers, Bob and Dave Knight, the Bulldogs’ success meant so much more than just their favorite team winning. It symbolized their love and faith in their team and a camaraderie they shared as brothers.

Bob said he does not remember much from UGA 1980 game, but he remembers the Bulldogs winning the national championship. He said he did not doubt the Bulldogs’ for a moment on Monday night as he watched from his home in LaGrange.

“I don’t remember too much about it now except that we won,” Bob said. “I didn’t think [Stetson Bennett] was going to lose [Monday’s] game I just knew we were still going to win because I just thought it was going to be our time. I had no doubt ever that we were going to win the game. I just had that feeling and sure enough, it turned out really well.”

Dave attended the game in person and said it was a special moment to share with his wife.

“What made it more special was my wife and I were there in person. We got our seats through the University of Georgia, and we were on the sixth level,” Dave said. “The way the stadium is situated we had a great view. It was a great venue to have the game.”

Dave said Bob charged him back in 1980 when he had acquired some championship merchandise.

“He’s always looked at me as the baby brother that he could make money off of,” Dave said. “I have a belt buckle from 1980 with a Bulldog on the front of it. He charged me $50 for it back then.” 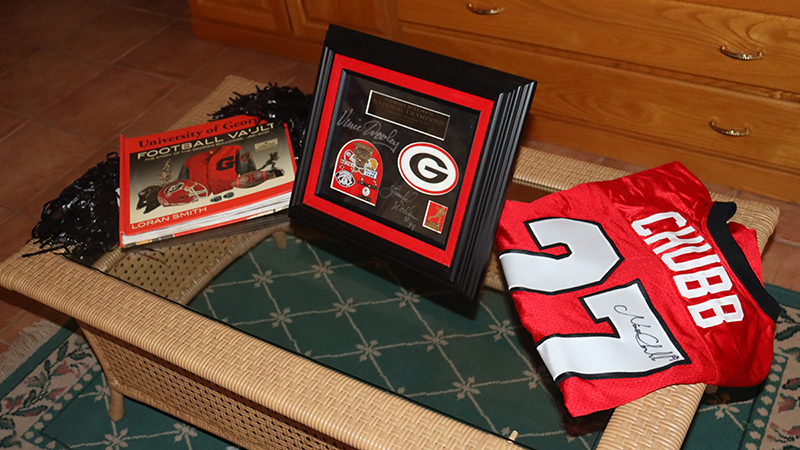 Dave Knight collected several different items over the years. Many of the items highlight the journey of the University of Georgia Bulldogs through the years, including an autographed Nick Chubb jersey, shown right. (Photo/Iris Hersey)

Dave said he shares the memorabilia he finds with his brother and sometimes he gives it to him for free, but not always.

“We’ve always sort of shared things,” Dave said. “Some of them I give to him, most of them I make him pay for.”

Bob said he may be the UGA alum, but he believes his brother to be the bigger Dawg fan.

“My brother didn’t go to University of Georgia, but I believe he’s a bigger Bulldog than I am,” Bob said. “He is a great brother and a great Bulldog.”

Dave said his favorite piece of memorabilia is a picture inspired by a player from LaGrange.

“My favorite would be this picture here, [“A Flicker of Hope”] and that’s where Bob Taylor from LaGrange beat Alabama in 1965, Dooley’s second year at Georgia,” Dave said. “That was Bob Taylor number 24 scoring the winning touchdown against Alabama.”