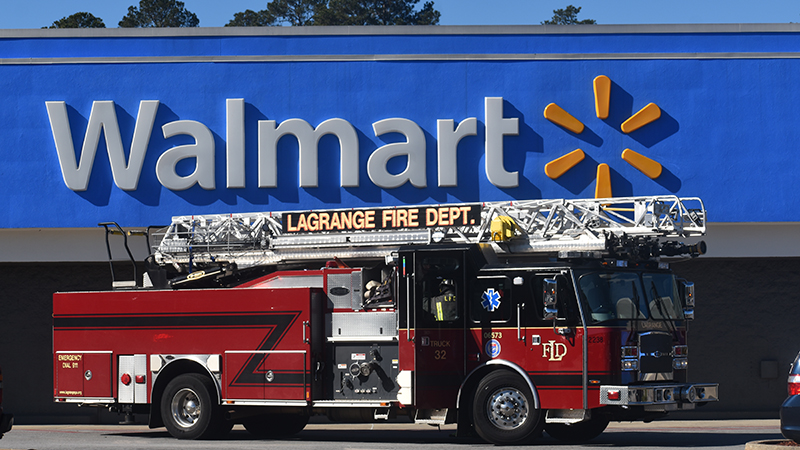 LaGrange Fire Department responded to a call from the Walmart on New Franklin. (Photo/Iris Hersey)

The LaGrange Fire Department responded to a call from the Walmart on New Franklin concerning a fire in the store’s pharmacy department.

The store was cleared for approximately an hour after smoke was discovered when the store’s heater was turned on.

According to Deputy Chief Willie Bradfield, who responded to the scene, the fire started in the pharmacy department and was due to the heat being turned on. Bradfield assured community members LFD was working to resolve the problem as quickly and efficiently as possible.

“We’re trying to isolate the problem as quickly as possible, so they can get back into the store and continue shopping,” Bradfield said at the scene Tuesday.

Bradfield said the issue was due to an AC unit. He said he is not sure how long it has been since the store used heat.

Brody Whitmore, a 7-year-old in Walmart at the time, said he was not sure why he was evacuated.

“I didn’t know what was happening,” Whitmore said. “I do not know where the fire was.”

Tom Smith, a retired firefighter who now works in Heard County, was at the store with his wife, Charlene and said he knew the fire department would need to be called in.

“I saw smoke. I looked at somebody and said you better call the fire department. I knew they were going to do it eventually,” Tom said.

Charlene said she went in for Atkins Bar and mouthwash which she tried to get before they were evacuated.

“We walked in, and it started smoking out of a vent in the ceiling, and we went out toward the back where it wasn’t so bad,” she said.

Tom said there is a very simple solution for the citizens of Troup County for this issue and that he taught it at his classes at West Georgia Technical College. He said he is proud of the way LFD handled the situation.

“When you see smoke, call the fireman and exit. Don’t wait,” Tom said. “They have one of the best commanders in the area today on duty here. I believe he’s fantastic. They’re all good.”