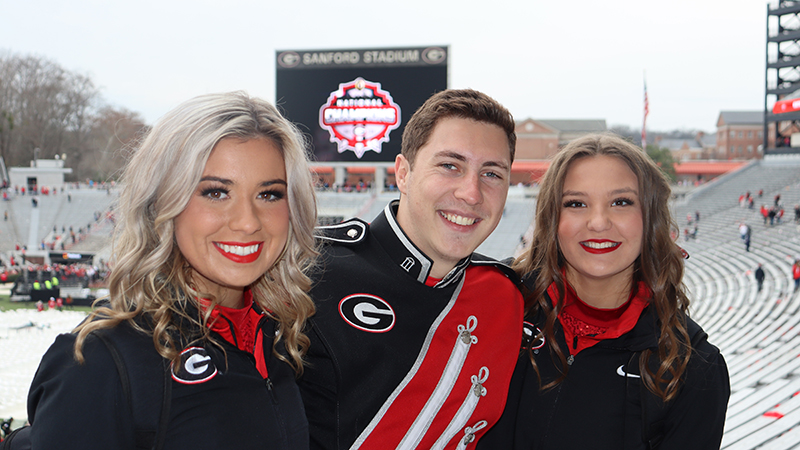 Collin Sanders, Lacey Stewart and Natalie Figiel posed for a picture after the celebration in Sanford Stadium on Saturday. Sanders and Stewart are sophomores at UGA, while Figiel is currently a freshman. (Photo/Iris Hersey)

Collin Sanders and Lacey Stewart graduated from the Troup County School System in May 2020. Sanders even graduated from THS as the valedictorian. Natalie Figiel graduated last May.

Sanders plays for the Red Coat Marching Band while Stewart and Figiel are majorettes for the University of Georgia.

Each student had an unique experience being in Indianapolis and Sanford Stadium over the last week. 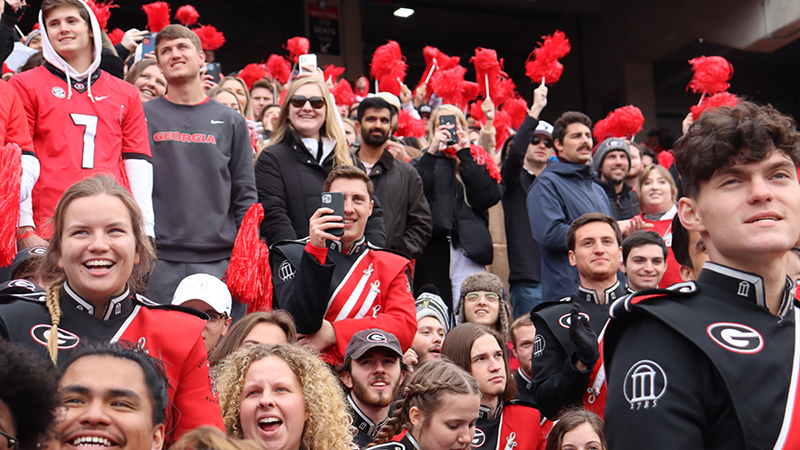 Collin Sanders always wanted to be in the Red Coats Band and got to see his team win the national championship this year. (Photo/Iris Hersey)

Sanders said he has been in shock since UGA won, and he only started to believe it once he saw the news and online coverage.

“I didn’t really celebrate the moment because I couldn’t believe this was happening. Twenty years from now I will probably remember the celebration after the game,” Sanders said.

“In the stands, cheering while the confetti rained down, it was such a special moment seeing everyone in the stadium and all of the different emotions.”

Stewart said the week was special for her because she got to share it with Fiegiel, a former classmate.

“I will forever be thankful to perform alongside both Natalie and Collin,” Stewart said.

“Natalie holds a special place in my heart because we both always shared the dream of wanting to twirl at the collegiate level. We are both experiencing our first season on the field together since there were lots of Covid restrictions last season that caused the band to not be able to perform on the field.”

Figiel said she feels incredibly blessed to be at the University of Georgia and to have made her childhood dream come true.

“Everyday I feel blessed to be here,” Figiel said. “There is no better feeling than stepping off the field after a performance realizing you are living out your dreams.” 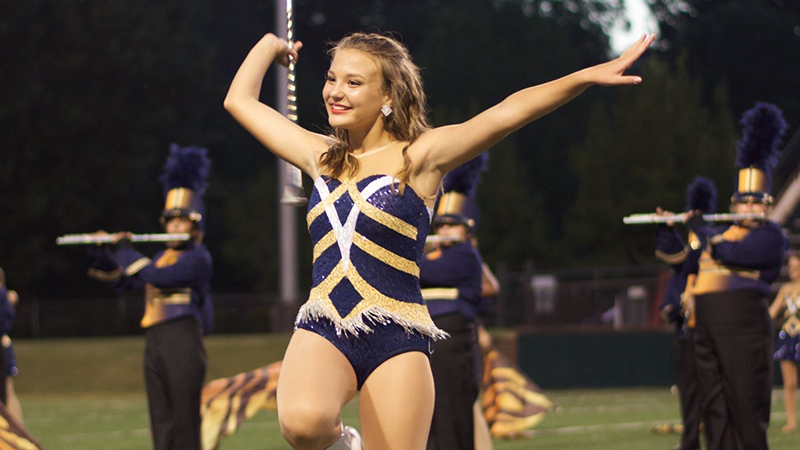 Natalie Figiel started as an UGA majorette this year and said it is a dream come true. A dream she worked on at her alma mater, Troup High School. (Photo/Contributed)

Collin’s mother, Andrea Sanders, said there was no greater joy for her than to see her son fulfill his life-long dream.

“As happy as I was for the Georgia Bulldogs to win a national championship, the joy and elation was 100-fold knowing that Collin was part of something so special after so many years of dreaming about it,” Andrea said.

Beth Figiel and her husband, Chester, are proud to see Natalie accomplish her dream in her first year of college at UGA.

Jessica Sebaugh shared the same sentiment about her daughter, Lacey.

“Lacey is living her dream, being a UGA majorette and to see her have the opportunity to take that dream to the national championship and experience that made me so happy. The chance of a lifetime,” Jessica said.

“She works so hard, and pushes herself. They all worked so hard all year. They deserve some love and recognition for the hard work they put in too.”

Andrea said she is grateful to THS for providing the opportunity for their students to start their passions early.

“I’m incredibly thankful to Troup High School and the band program there for preparing our kids for such a large stage. The Bulldogs may have more championships in their future, but none will ever be as sweet as the first one in 41 years,” Andrea said.

“What an amazing experience for these kids. They will never forget it.”

Stewart said the 2021 season was fast paced, but that she is grateful to have been a part of it.

“The season is so fast paced. We are always preparing ahead for the next game since we perform several different shows throughout the season. It wasn’t until a few days after I got back to Athens that it sunk in, but sometimes it still doesn’t feel real,” Stewart said.

“I can’t even explain how good it feels to have been able to experience that type of atmosphere, everyone on the team came in with an open mindset, and we were just there to cheer on the Dawgs regardless of the outcome.” 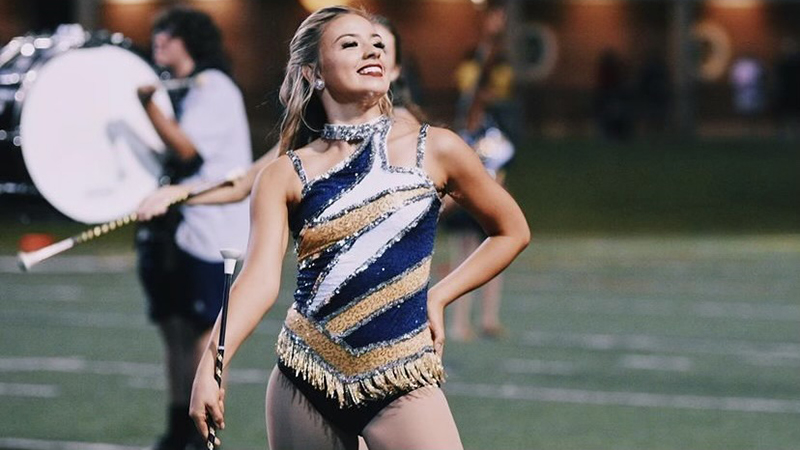 Lacey Stewart is a sophomore at the University of Georgia and was in Troup High School’s band as a majorette. She thanked her classmates and teammates for their support. (Photo/Contributed)