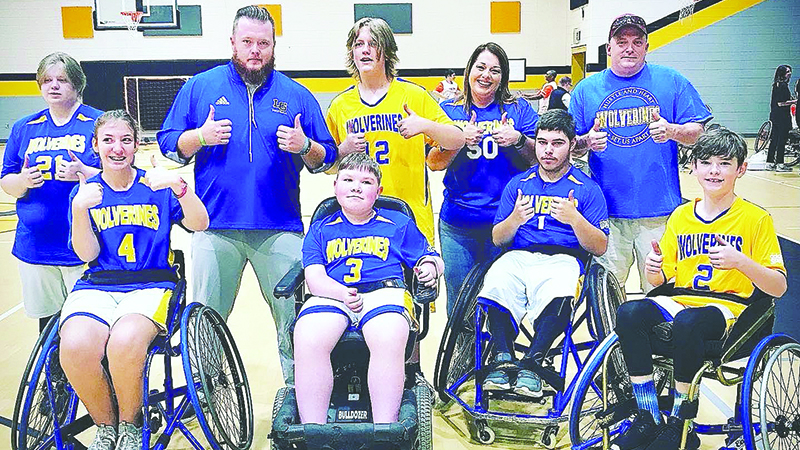 Coach Jacob Roche and Area Coordinator Kristy Prater of the West Georgia Wolverines gave a presentation on their adaptive sports teams to the Troup County School Board at Tuesday’s work session. The program currently has wheelchair handball, basketball and football teams and serves children in Troup County and surrounding counties from first to twelfth grade.

Prater said she hopes to bring awareness to the West Georgia Wolverines, but that the team also needs donations to continue serving students.

“We’re trying to bring awareness, but we also need funding. We started out with equipment that was severely outdated and no funds at all,” Prater said. “We received a generous donation to replace wheels and casters on ten chairs, and the Callaway Foundation granted us the funds for our championship rings. The [Troup County] Recreation Department partnered with TCSS to support the team and supplied uniforms and new handballs for us. Anything else has been supplied by myself, the coaches and parents.”

Prater said it can be hard for their team to compete when other teams have the benefit of more funding and better equipment.

“It’s really hard to compete when you have such outdated equipment, and you’re playing against a team whose school board bought the whole team custom chairs,” she said.

Prater said she has seen firsthand what adaptive sports can do through her son, Logan Wegienka. She remembers a moment at one of his games where she showed him all of his hard work had paid off and the community was supporting him.

“We’re both in tears, and I’m telling him to look around at the packed venue and see everyone that is supporting this team,” Prater said. “I’ve seen firsthand what involvement in adapted sports can do. I want the team to give every player a safe place to feel included and to grow.  It teaches them teamwork and responsibility.”

Prater said she wants every child in the region to be able to experience the benefits of adaptive sports, and she hopes one day to have enough students for a junior varsity and varsity team.

“I want that for every child in our region to be able to experience this,” Prater said. “My goal is to eventually have enough players that we can field two teams, a JV and a Varsity team.”

Roache said coaching adaptive sports has helped him to grow as a coach and that his best moments coaching have been watching the expressions on his player’s face when they accomplish a goal.

“I do handball, football and basketball for the adaptive sports. It is an opportunity for me to grow as a coach because coaching adaptive sports takes a little different skill and mindset than coaching able-body sports,” Roache said. “The best moment would be getting to see the expressions on my athlete’s face when they have accomplished something they thought was not possible.”

The West Georgia Wolverines started in Meriwether County in 1995, but the team disbanded in December 2019. Logan Wegienka, a senior at LaGrange High School at the time, brought the idea of starting a team to Coach Mike Pauley. After some discussion and setbacks due to COVID, the team practiced for the first time in November 2020 and played their first game in January 2021.

Prater said pushing for the team and getting it what it needs to succeed has been a family venture and her son was even able to fly back from his college to see the state championship.

“It was all because of Logan’s vision. It feels very much like a family venture. He was able to fly back from Texas and be at the state championship when we won in 2021,” she said.