Looking Forward: The process to fill LeGree McCamey’s council seat could have hurdles 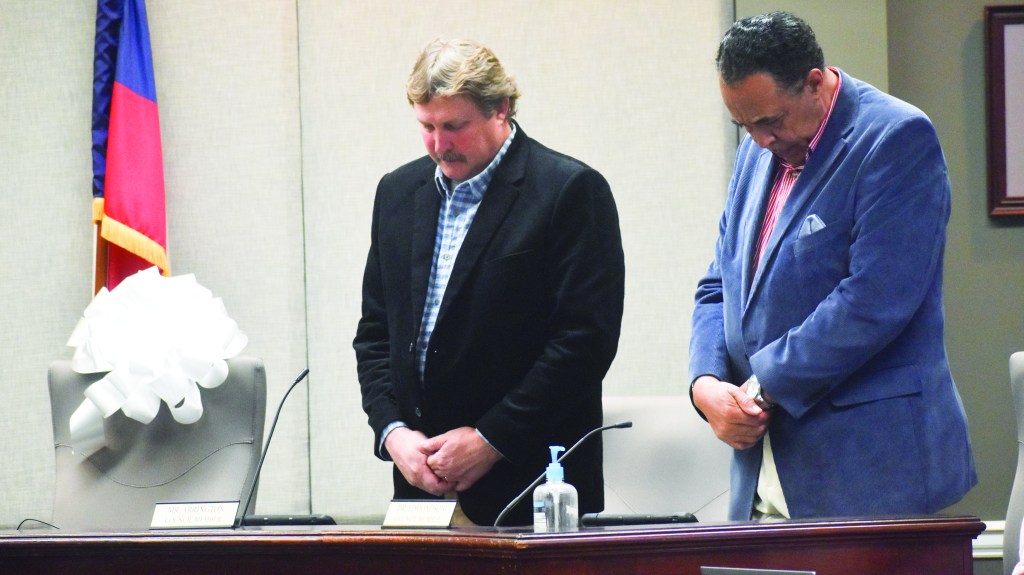 Councilmembers Jim Arrington and W.T. Edmondson bow their heads in a moment of silence during the city’s council meeting Tuesday to honor their friend and co-worker LeGree McCamey, who died last Thursday. McCamey’s seat, far left, was adorned with a white ribbon.

It could take several months before the late city councilmember LeGree McCamey’s seat is filled, City Attorney Jeff Todd explained at the LaGrange City Council’s work session Tuesday, as the city faces a district apportionment issue that will need to be addressed before an election can be held.

The City of LaGrange’s municipal charter said in the event that the seat of the mayor or a councilmember is vacated for any reason, the remaining councilmembers will order a special election to fill the seat and complete the unexpired term of office to be held not less than ten nor more than thirty (30) days from the time such vacancy occurs.

The charter further states if a vacancy occurs within one year of the expiration of the term of office, said vacancy in office shall be filled by the remaining members of the council.

However, the city code is also modified by state law as it relates to elections.

“The state law prescribes the dates you can have a special election,” Todd said. “We’re in an even-numbered year so there are three opportunities: March, the general primary in May and November.”

Also, with the census having occurred in 2020, the city had plans to redistrict Districts 1 and 2 prior to the upcoming November 2023 election. What determines when an election can be called is the shape of the city’s district maps, Todd said.

“Right now, we don’t know because we have not had the new census numbers imposed on [the city’s] old district lines,” he said.

If the population hasn’t changed enough that a map change isn’t required, the election could happen in May. On the other hand, if the districts are out of line, then a new map will be required, pushing the election to November.

The practical reason for this is that Andy Harper, the Board of Elections supervisor, has to have any new district information in the state’s computer by mid-February for the primary election in May, Todd explained.

If the city needs a new map, it will not have the ability to draw and adopt the map by mid-February for a March election.

Todd and Mayor Jim Thornton recently spoke with the Legislative and Congressional Reapportionment Office, which is in charge of creating district maps, to see if they could create a new District 1 and 2 map so that the election could happen in May.

Currently, Todd explained, the office is only creating county maps and school boards due to it being a county election year.

“[Thornton] asked them if, under the circumstances, could they run a map to see if we’re within tolerance or not,” Todd said.

“I talked to them again this morning, and they said they think they’re going to have that done for us soon. If we’re in tolerance, [the city] will have the ability to set up a schedule in May. If not, we’ll start working on a new map and know that [the election] is going to be in November.”

If District 1 or 2 is out of tolerance, meaning there is more people in one district than the other, the city cannot hold an election under those current maps as it would create an invalid election.

In the meantime, District 2 is not without representation. Councilmembers W.T. Edmondson and Nathan Gaskin still represent the district.