From soldier to teacher: Teacher of the Year nominee transitioned from the military to a classroom 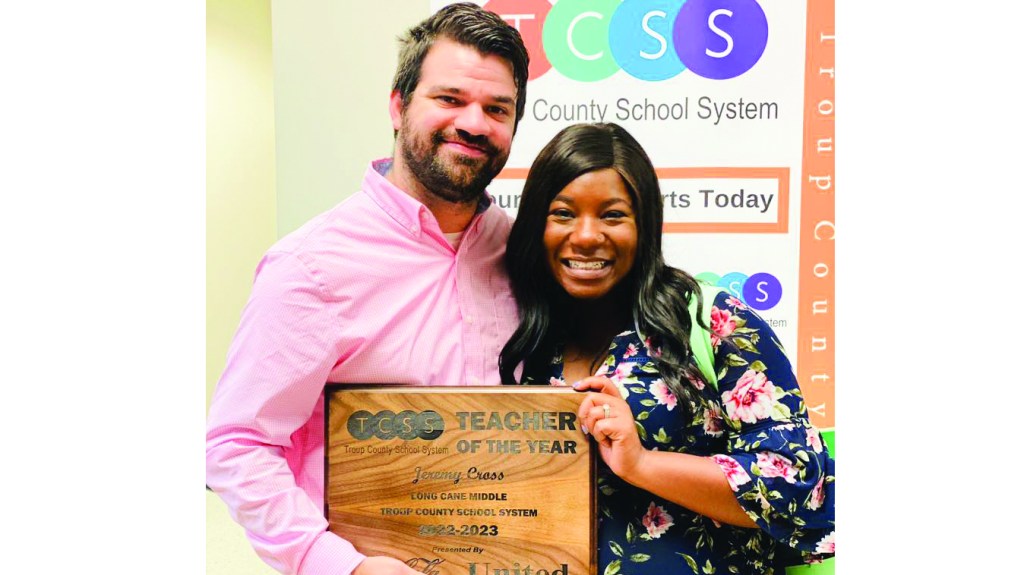 Jeremy Cross, the teacher of the year at Long Cane Middle School, still remembers when he first started dreaming about becoming a teacher during his deployment.

After a stint in the U.S. Army and working for Chick-fil-A and churches, he now teaches Georgia studies at LCMS and coaches football for both his middle school and Troup High School.

“I remember sitting in a deployed location in the middle of the night, dreaming about wanting to be a coach and a teacher one day whenever I get out of the military,” Cross said.

Cross is open with his students about his time in the Air Force and said his students always ask him questions after they learn about it.

“My dad’s still in the army and so I am very open about yes, I did serve. They ask the craziest questions and some of them I just can’t answer,” Cross said.

“I’ll tell them funny boot camp stories and experiences that I had … like being face to face with a camel and having it spit on me — that was weird.”

Cross said he chooses to be transparent with not only his students but their parents who may have questions for him about the military.

“I’ve had those students take those stories home and then parents want to talk. I’m very transparent. I don’t try to encourage one way or the other. I just tell them what my experience was,” Cross said.

Cross said students sometimes need a personal connection to help them learn the history that he teaches in his class. 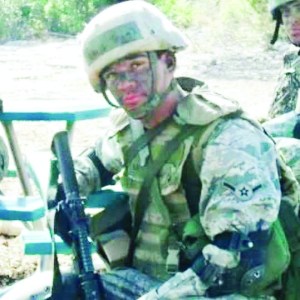 Jeremy Cross as a young soldier in the US Air Force.

“Sometimes it takes something like a sports connection or a military connection because a lot of them love games like Call of Duty, and that’s usually how it will start. They’ll ask me, ‘Coach Cross, you ever play Call of Duty? I’ll be like, ‘No, I lived it’,” Cross said.

Cross said ultimately his passion for his students and his personal history drove him to pursue teaching after he received his master’s degree.

“Then, at every base I went to, I volunteered and helped with the local student ministry.”

Cross said he loves teaching the students at LCMS and that he has a lot of pride in his past and current students.

“I still coach a lot of kids that I taught and coached when they were in seventh and eighth grade. I still have those old relationships with them,” Cross said.

“Now, I’m forming new ones with the upcoming seventh and eighth-graders. I have a ton of pride that [LCMS] gave me my first opportunity in teaching and coaching. I’m loyal. I’m committed. I’m here for everything.”

Cross thanked his wife for her support during his career. He also thanked his family and friends for their support as his family welcomed their second daughter recently.

“I can’t give enough credit to my wife who takes on so much even when I’m at practice or I’m staying after school to help a student get some extra work done or tutoring,” he said.

“We have a ton of family support, a ton of friends support and it really does take a village to raise even one and now we have two.”

Cross said he ultimately wants his students to know he is invested in them and their future. He said he hopes they learn what they need from his class and coaching.

“I want them to know that I truly care about their future, and I want them to learn as much as they can from Georgia studies,” he said.

“I want them to learn as much as they can about life and how far a good work ethic will take you.”

Cross said he remembers telling a friend he did not think he had a chance at the TOTY nomination, but he is humbled to have won it.

“I [said] I had no shot because there are so many great teachers here,” he said. “I was very humbled to get it, and it was such an honor. There are so many worthy teachers who, in my opinion, were so deserving.”