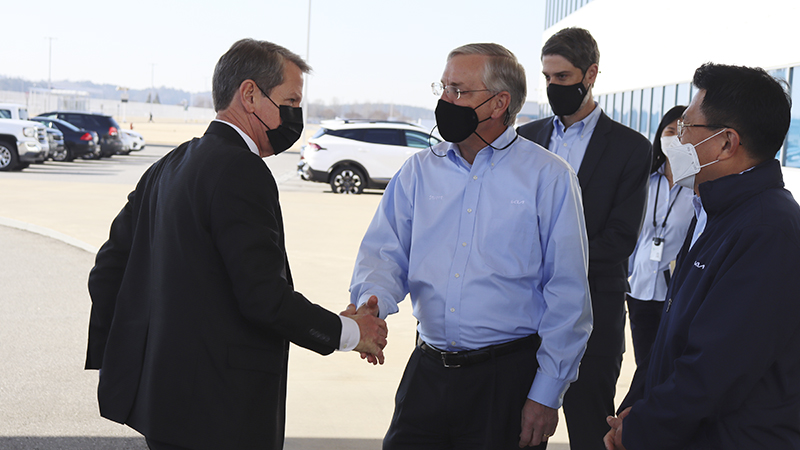 At the breakfast, Kemp spoke about budget proposals he’s made, including the tax refund he’s proposed that would give single filers a $250 tax credit and joint filers a $500 credit. The funding would come from a budget surplus after state leaders planned for the uncertainty of the COVID-19 pandemic.

“We’re doing this because I believe that when government has more than we need, we should return it to the people who sent it to us in the first place,” Kemp said. “I believe it’s your money.”

The Republican governor finds himself in a re-election campaign against Vernon Jones, David Perdue and Kandiss Taylor. The winner of the Republican primary will then likely face off with Democrat Stacy Abrams in the general election, who Kemp narrowly defeated in 2018. Elbert Bartell is also running as an independent.

Kemp shared that just since he was elected, he estimated 1700 new jobs created in Troup County and an investment of $474 million.

Following the breakfast, Kemp spoke to The LaGrange Daily News, and about Remington Arms, which announced in late 2021 that it was moving its headquarters to LaGrange.

“I just think it brings another brand, a different kind of manufacturing to the area, which is great,” he said. “And that’s what we’re seeing in a lot of different parts of our state. So, I think there’s tremendous opportunities here.”

Kemp said he believes there’s a lot of optimism in the state right now, considering how Georgia has managed the ongoing pandemic. The state is averaging around 15,000 new cases of COVID-19 per day, according to data from the Georgia Department of Public Health.

“We just have to continue to be resilient, whether this is the end, or whether it’s the beginning of another variant,” Kemp said of where the state stands in regards to COVID. “We’re going to have to deal with it. “We’ve got tools to fight it now.”

During his speech, the governor touted the lowest unemployment rate in state history at 2.4%. The LDN asked him what the state could do to fill jobs at restaurants and other small businesses, which are still having a difficult time to find employees, despite the record number of people in the workforce.

“It’s a good problem to have number one, I mean, it could be worse, it could be one of those states where restaurants are still shut down, or, you know, they’re just now opening them back up, because the last wave they shut in person dining down,” Kemp said. “It is a tough environment, we had a lot of people leave the workforce, we had the federal government paying people more to stay home than go back to work for a very long time.”

Kemp said they are working with sectors of the community — law enforcement, health care and more — to ensure students are hitting the workforce.

“This is not a problem that’s unique to Georgia, it’s happening all over the country, but we’re doing better than most than getting people back into the workforce,” he said.

Following the breakfast, Kemp went to KIA Georgia for the unveiling of the Sportage.

“We’re glad to have it in Georgia,” Kemp said. “It’s going to create more opportunities for people in this part of the state and great for our statewide brand.”

Kemp took a moment to thank the KIA workforce and all Georgians who have worked through the COVID-19 pandemic. He expressed his gratitude to be the governor.

“All Georgians have fought hard to get us to where we are at this point in the pandemic. It’s been a lot of tough times, a lot of trying times, but Georgians are very resilient people,” he said. “I’m grateful to be their governor. I’m just very thankful for how hard they fought right alongside with us.”