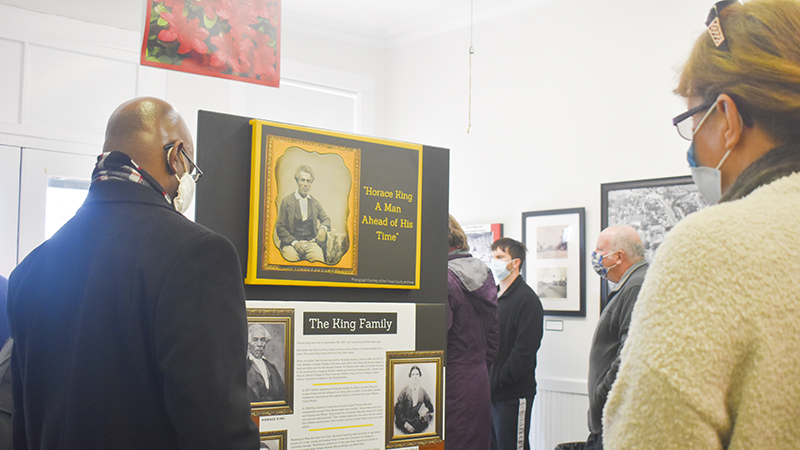 PINE MOUNTAIN – The story of Horace King, an area Black man who was born into slavery but became a prominent architect in the area, is one that remains a staple in the history of Troup County and surrounding counties.

King’s story is being highlighted in a special exhibit at the Chipley Historic Center in Pine Mountain. The exhibit, titled “Horace King, A Man Ahead of His Time” showcases the known details of King’s life and work. However, historian Kaye Minchew notes in the prelude presentation she held Sunday that there is still plenty about King that history is uncertain about.

King was born into a family of enslaved people in 1807. At one point, King, as well as his mother and siblings, were sold to a man named John Godwin. Minchew pointed out that there was some speculation that King was related to Godwin or even his wife, but that has yet to be proven.

King’s mother was a multi-racial woman by the name of Susan, but there is still some debate as to who his father may have been, though he was believed to be a man named Edmund, Minchew said. King’s ethnicity is specified as Black, Native American and possibly European.

“If you look at [photographs of King,] you can see he has the high cheekbones that we classically see with those of Indian descent,” Minchew said. “I looked to see if there had been any DNA tests that tied to [King], and I couldn’t find any.”

In 1824, at the age of 17, King began his career designing and building covered bridges, though he was still enslaved until 1852.  During this time, he became familiar with Ithiel Town and his lattice trust designs of covered bridges. Town won a contract to build a bridge over the Pee Dee River in the Carolinas and Godwin and King are believed to have had a part in building that bridge.

“We don’t know [if they worked on the bridge], but we know King did not invent Town’s lattice trust design [for bridges], but he uses it to make his living for over 50 years,” Minchew said.

The design King used was relatively simple for the time, but it was stable, even if the materials used in the process were quick to give way.

Despite being a slave, King was to earn money through his bridge-building that rendered him able to partially buy his freedom from Godwin. An Alabama State legislature passed a special law to fully give King his freedom, though other members of his family stayed enslaved.

“The fact that [King] is granted his freedom is a huge deal. and it may have been partly done for financial reasons so that [King] could travel to these covered bridge sites,” Minchew said. “By then, King is making money, but one oddity is that he never tries to buy the freedom of his brother and sister. We don’t know why.”

King was married twice and rendered a total of five children who inherited his bridge-making expertise. His marriage to his second wife, Minchew said, is noted as an interesting contract as she was a free Black woman who was also of mixed ethnicity. Her legal status guaranteed freedom for their children.

The family also built buildings, including the staircase within the Alabama State Capitol, which is still in use today. Locally, they built the east side and parts of the north side of Lafayette Square in LaGrange, the Kimbrough building in Pine Mountain and the Dillingham Bridge in Columbus.

One of the most well-known bridges in Troup County was the Glass’ Bridge between LaGrange and West Point. Named for the Glass family, the bridge was deliberately burned down in 1954 due to instability.

At one point, Minchew noted, there were as many as a dozen King bridges in Troup County. Presently, there are none.

However, a bridge of King’s that has been stationed at the John A. Sibley Horticultural Center at Callaway Gardens will be relocated back to LaGrange later this month. The bridge will be included in a renovation of the Mulberry Street Cemetery and will be placed near Horace King’s gravesite.

When he died, his funeral procession went around what is now LaFayette Square, the center of LaGrange. Though this seemed like an end to his story, it was not.

King’s grave was initially unmarked or possibly marked with a wooden marker and was nearly forgotten about, Minchew said.

King was buried alongside his son, Marshal, at the Mulberry Street Cemetery, though Minchew said there could possibly be other family members buried there that went undocumented.

“We were able to bring in somebody with underground radar technology [to survey the cemetery,]” Minchew said. “I would have bet there were 50 to 100 graves, but it turned out there were 425 unmarked graves. My hope had been that someone would say [their family] was buried there, but that hasn’t happened so we still don’t know who most of those people are.”

The radar showed that there were vaults around Kings’ grave, indicating his wife, Jane, and other family members may be with them.

King’s descendants, should they currently exist at all, are also a subject of debate.

King’s last known direct descendent was his granddaughter, Theodore Thomas, who lived in Troup County until her death in the 1980s and was present during the construction of King’s historic marker in 1979. A new grave marker was put up for Marshal in 2016.

A Virginia woman visited the Troup County Archives to work on a genealogy project and found out she was related to King.

“She was a white woman directly related to Horace King and knew nothing about him,” Minchew said.

King’s exhibit deciphering his work and family will remain at the Chipley Historical Center until May 27. The display features a variety of historical images of King and his family and some of the projects he worked on, which are on loan from the Library of Congress, Alabama Department of Archives and History, Troup County Archives, Columbus State University and The Columbus Museum. The program presented by Minchew was the last in a series funded by the Georgia Endowment for the Humanities. 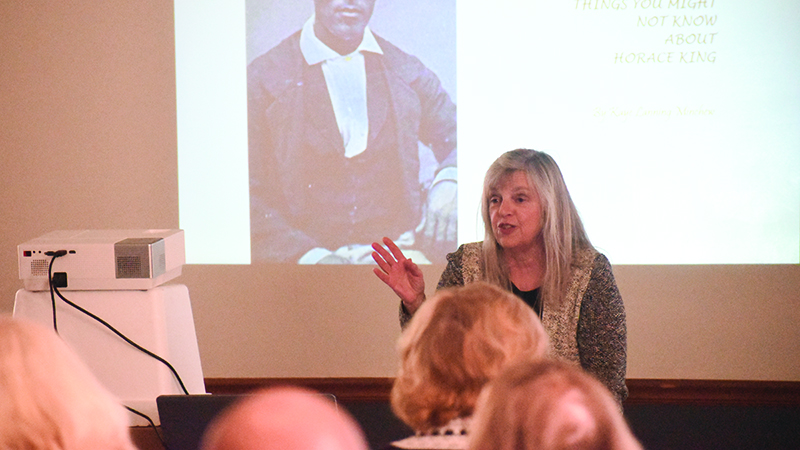