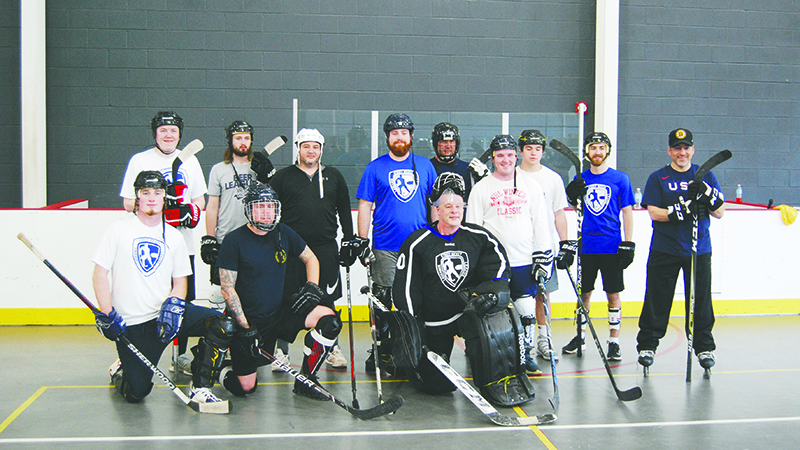 A new street ball hockey team has been founded in LaGrange. While the Quad State Hooligans inaugural season does not start until April, they held their first practice on Saturday to introduce teammates and start formulating strategies in the rink.

The National Ball Hockey League was founded and had its inaugural season in 2021, so the Hooligans are joining the league while it is still in its’ infancy.

The Hooligans will play in the third tier of the North Carolina Division. The other three teams in the region are all located in North Carolina.

For those wishing to attend games, prepare for a trek up to Raleigh, North Carolina as that is where the Hooligans will play all their games in the regular season.

The team has athletes from five different states across the southeast; unfortunately, they created the “quad” name before adding a player from Tennessee. The Hooligans were formed with help from the LaGrange Street Hockey League, which was founded by Glenn Cunningham and Brett Miolen (Cuningham is a member of the newly-founded Hooligans).

Paul Bono will coach the team for its inaugural season. He has over 30 years of experience in the various forms of hockey. Bono originated in Massachusetts and played Division 1 ice hockey at Boston University. He currently lives in the LaGrange area and has been a member of the LaGrange street ball hockey league since its founding in 2013.

The team consists of 19 men and one woman. The maximum number of players for the National Ball Hockey League is 22, and the team is hoping to fill those roster spots before the season tips off in a couple months.

Most of the athletes on the team only have experience playing pickup hockey.

“Ashley [Mouzzon] is our lone female, but she probably has more ball hockey experience than anybody actually out here,” said General Manager Hill Daniel. “For most of the guys, this will be their first venture into competitive hockey.”

Mouzzon, who is originally from New Jersey, started playing ball hockey in the early

2000s and has been a part of many different leagues across the United States including the United Women’s Hockey League.

LaGrange native Joseph Shaw will serve as the team’s first captain.  Shaw did not play any variation of hockey until joining the LaGrange street ball hockey league back in 2013.

“I came out here (Mike Daniel Recreation Center) to try and get some cardio in after the gym. I started with Glenn (Cunningham), and we’ve been rocking ever since,” Shaw said.

One of the assistant captains, Lou Harvatin traveled all the way from North Augusta, South Carolina to make the first practice on Saturday.

“This is a great opportunity to play at a national level,” Harvatin said. “I’ve been friends with  Glenn (Cunningham) for several years, and played against him in various tournaments. We messaged back and forth and made it happen, it’s only a few hours to travel, so I thought why not give it a shot.”