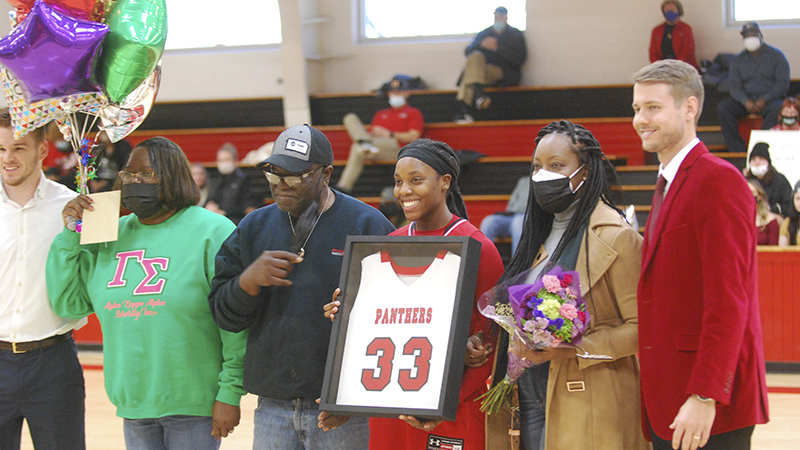 The LaGrange College women’s basketball team got revenge on senior night versus Maryville (Tenn.) Saturday after a tough loss less than a week ago at Maryville. The Panthers won in a key USA South Conference west division affair in historic Mariotti Gymnasium. LaGrange came into the game third in the region and Maryville was tied for fourth.

The game was a back-and-forth affair with neither team able to assert their dominance, but Gracie Brunel showed up and showed out. Brunel had a game-high 26 points, none more important than layup she shit with 35 seconds left to put the Panthers up 71-69. She then iced the game with two huge free throws with 8.9 seconds to put the Panthers up by three.

“This team fights every day, especially on our home court,” Brunell said. “This is where we put blood, sweat and tears in everyday for three hours a day.”

For Brunel and for Head Coach Jasen Jonus, this was a win for the four seniors on the team.

“This was so sweet, especially for senior night,” Jonus said. “To show resiliency on senior night and come out and make a point is so sweet.”

The LaGrange Panthers got off to a slow start and did not score a basket until two minutes and 19 seconds into the game when Jada Brown made a layup deep in the paint. After Brown made the first shot, LaGrange was able to capture some momentum and establish a 17-12 lead at the end of the first quarter. Mayville hit back in the second quarter as it outscored LaGrange by seven.

It looked like LaGrange would take the lead into halftime as Brunel grabbed an offensive board and put it back for two as time expired, but the refs waved the basket and called an offensive foul. The LaGrange bench was irate which led to a technical foul on Jonus; the first technical foul of his career. Shelby Hix hit both the free throws to give Maryville a two-point lead at the break.

This gave Maryville something to build off going into the second half and stretched its lead to three at the end of the third quarter.

The fourth quarter was hectic, but senior Jalaya Lewis showed massive character to nail a 3-pointer with 3:33 left in the game to give the Panthers their first lead of the fourth quarter; she was 0-2 on 3-pointers before the ball fell through the net.

LaGrange College improved to 12-8 overall and 7-4 in the conference. The Panthers next game is an even tougher test as they host the top team in their division, Berea.