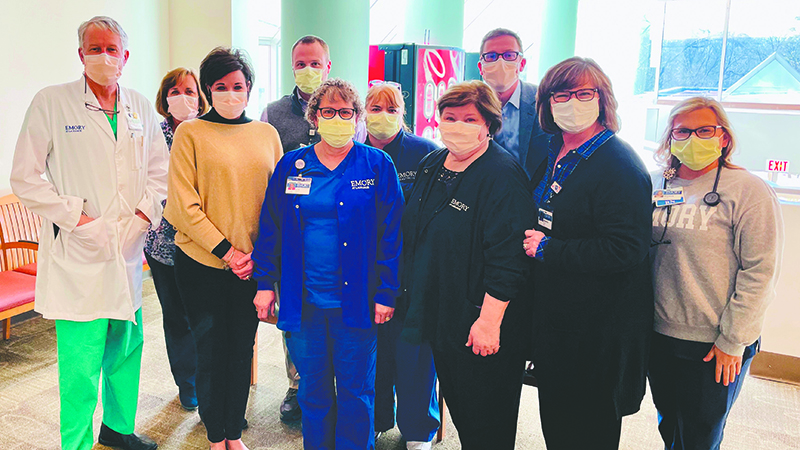 The staff at Emory LaGrange celebrates with Joy Thomas, who won a drawing for Super Bowl tickets last week.

Joy Thomas and her husband, Steve, were ready to celebrate their 30th anniversary this weekend. Although no plans had been set in stone, the couple had considered going to the Outer Banks, a place Steve had always wanted to visit.

Instead, that trip has been rescheduled, and they’ll be on the other coast entirely, at a place they never would’ve imagined.

Thanks to a partnership between Emory Healthcare, the NFL and the Atlanta Falcons, they’ll be in Los Angeles for Super Bowl LVI.

Joy, a LPN at Emory at LaGrange, won tickets to the Super Bowl in a drawing for Emory employees. The purpose of the drawing is to thank healthcare workers for all they’ve done during the pandemic.

“It’s extra exciting. It’s a once in a lifetime thing that we’ll get to experience, and then celebrate our anniversary while we’re out there too,” Joy said.

She couldn’t believe it when she won, and her husband, who didn’t even know about the drawing thought she was kidding.

Joy works as pre-op coordinator, scheduling surgeries for Dr. Ralston Major and Dr. Grant Major. She’s been in that role for three years but has worked in healthcare for 38 years.

“I think it’s amazing for them to reach out and honor healthcare workers like that,” she said of the drawing. “You don’t expect it.”

The couple flies out on Friday, Feb. 11. Their airfare and hotel room are paid for, and they also received a $500 gift card. Their wedding anniversary is Tuesday, Feb. 15.

Joy is a Georgia Bulldogs fan, and she doesn’t have a favorite NFL team. However, she’ll be cheering on the Rams because her husband had been rooting for the 49ers in this year’s playoffs. The Rams defeated the 49ers in the NFC Championship game and will play the Cincinnati Bengals in the Super Bowl.