Grangers boys fall to Spencer in battle of region leaders 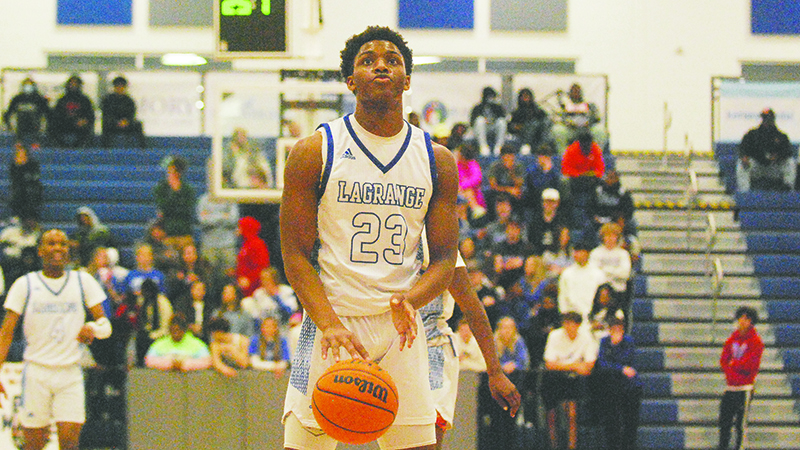 The LaGrange High School boys basketball team could not pull off the upset as they fell to the Spencer Greenwave by a score of 67-63 Tuesday night. This game had little meaning for the standings as Spencer solidified themselves as the No.1 team in the region and LaGrange as No.2. For the people in the stands this game meant something. Students piled into the student section and brought an ESPN table to highlight this marquee matchup.

Spencer scored the first 17 points of the ballgame and it was hard to see how LaGrange was going to be able to claw back into the game. The Grangers offense was lethargic in the first quarter with only five total points scored.

Head coach Mark Veal burned a timeout a minute and 17 seconds in.

The Grangers fought hard late in the first quarter and a Devin Dowell bucket and the foul brought some life into the building.

“Earlier in the year, we played a game like that and never got back in it, I think we lost by like 30,” Veal said. “That game could have been gone, but we showed a lot of fight to get back in it.”

The offense exploded for 21 points in the second quarter. It was the Dowell show once again for the Grangers as he rattled off 14 points in the quarter en route to a game high 30 points. When he stepped inside the three-point line and nailed a jumper to cut the lead to one, the crowd went into a frenzy. Spencer was able to stretch the lead back out to five at the break, but Dowell was the spark plug the Grangers needed to get back in the game.

“He’s got room to improve, but he’s been playing pretty good the last few games,” Veal said. “He started out slow at the beginning of the year, but he’s got it going now.”

The third quarter was back-and-forth with LaGrange able to capture its first lead of the game when Tristan Smith sank two free throws to put the Grangers up 41-39 with a minute and 28 seconds left to play in the third quarter. The Greenwave recaptured the lead, heading into the fourth quarter up 44-43.

The Grangers never took the lead back as the Greenwave kept them at bay. A late technical foul on the Grangers also gave Spencer some help as it pulled away.

LaGrange falls to 19-5 overall and 12-3 in the region. The Grangers final regular season game is on Feb. 11 as they host region foe Hardaway.