Spencer beats LHS girls in back and forth game 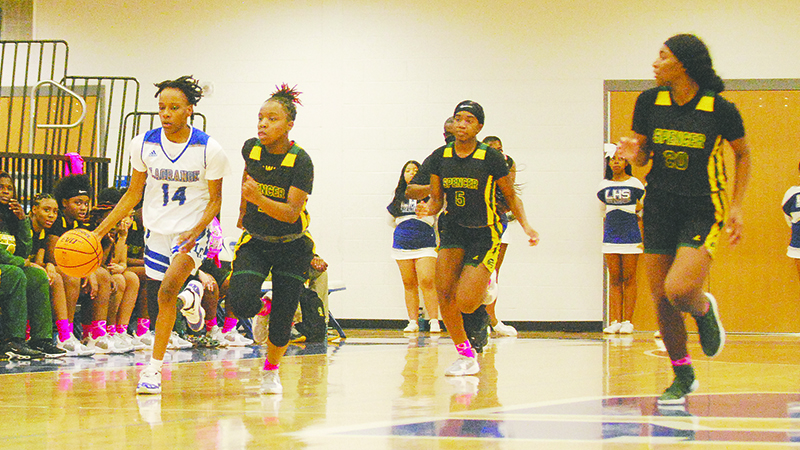 The LaGrange girls basketball team let a first-half lead slip away as they lost their penultimate game of the season to Spencer 33-30 on Tuesday night.

Sophomore Muffin Pope broke a scoring drought for the Grangers when she hit a basket three minutes into the game. Neither team could get much going offensively early as Brittney Heard hit a tear-drop floater with under a minute to go in the first quarter to give the Grangers their first lead of the game at 8-7.

Heard had to carry the load offensively as she was the only Granger in double figures with 12 points.

It was a back-in-forth affair as there were four lead changes in the second quarter. When the Grangers offense sputtered, Holly Lynn anchored the defense to keep them in the game. Her presence in the paint limited Spencer’s ability to get baskets in the paint. Lynn chipped in on the offensive end as well as she scored 4 points.

Heard was the hero once again in the second quarter when she hit a layup with 37 seconds to go to give LaGrange an 18-17 lead at the break.

The third quarter was as tightly contested as the first two. Spencer was able to take a one-point lead heading into the fourth quarter and then went on a 5-0 run to start the fourth.

The Grangers were able to cut the lead to three, but Heard missed a chance to send it to overtime as time expired.

The Grangers drop to 2-22 overall and 1-14 in the region. Their final game of the regular season is Friday against Hardaway.