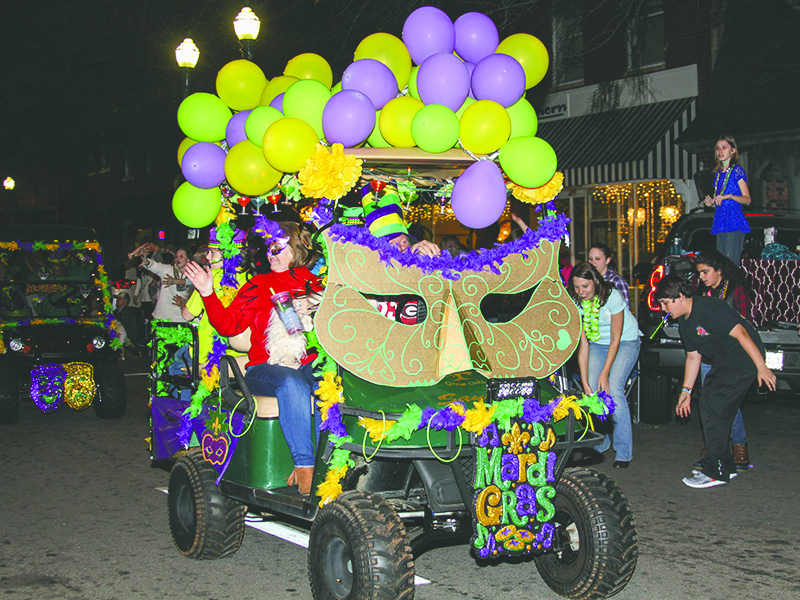 After taking a year off due to COVID-19, the annual Krewe of Mask Mardi Gras Parade is returning to LaGrange on Feb. 19.

The theme of this year’s parade is “Catch 22: The Craziness Continues.”

The parade is usually recognized by all of the doubloons, beads and stuffed animals being thrown into the crowd of bystanders. Boudreaux made it clear that it’s a very family-centered parade.

“Everything we do and every float we [allow] is required to be family and child friendly,” she said. “If anyone on our parade route is caught doing anything we don’t approve, then they are dismissed from the parade. This is a family parade.”

Boudreaux and the other organizers, John Cashen and Ken Gordon, all have New Orleans roots. Mardi Gras played a special part in their childhood years.

“That’s what you waited for all year [in New Orleans] – not Christmas, Mardi Gras,” she said. “And we wanted our children to enjoy the same thing, and that’s basically what started Mardi Gras here.”

The parade route takes the floats throughout downtown, including around the square. This is the fifth year of the parade, with the last being in February 2020, right before the COVID-19 pandemic started.

New apartment/retail complex planned at intersection of Davis and…