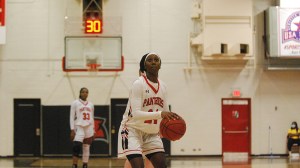 LaGrange College’s women’s basketball team fell to Piedmont 69-52 as they could not pull off two upsets in the span of four days. LaGrange upset Berea, the top team in the USA South Conference west division, on Sunday, but could not overcome the odds to upset the number two team in the division on Wednesday night.

“Down the stretch we didn’t execute, but I strongly believe we have the talent to beat them,” said Head Coach Jasen Jonus. “Our mindset when we play Piedmont is already down.”

The Panthers rattled of six straight points to start the game, but the Lions answered with a 10-2 run to capture the lead. The LaGrange offense could not get any traction in the first half and subsequently the Lions were able to stretch their lead up to nine late in the second quarter. Jayla Lewis went on a personal 5-0 run to close out the quarter and keep the Panthers within striking distance at the break.

Freshman Ema Turner ended the first half without any points but her impact was felt elsewhere. She hounded the Piedmont guards into multiple turnovers, contributed five of the team’s eight assists, and secured three rebounds from the point guard position.

The third quarter was back-and-forth as neither team was able to establish any sort of dominance over its opponent. The score was knotted up at 46 heading to the fourth quarter.

Things really got away from the Panthers in the fourth quarter as their offense stalled out possession after possession. LaGrange could only muster six points in the final period.

“In the fourth quarter, we tried to play to much one-on-one, forcing shots, poor ball movement,” Jonus said.

Center Breonna Glover was the star for LaGrange with 14 points and nine rebounds. She dominated the first half but was limited in the second half after sustaining a leg injury. Leading scorer Gracie Brunel was also battling food poisoning two days ago which limited her minutes and abilities.

“No excuses, we still came out and showed we could be the better team,” Jonus said. “We just have to put it together for a full 40 minutes.”

LaGrange drops to 13-9 and remains third in the USA South Conference west division with a record of 8-5. The Panthers next game is at Covenant on Feb. 12; the Panthers won their home match against them earlier in the season 68-42.