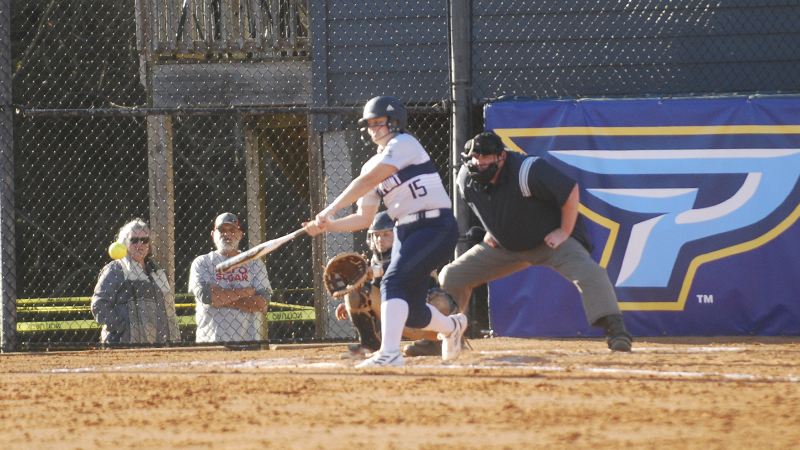 After being swept in the opening series of the season by Middle Georgia State, Point University beat Stillman 4-2 in the first game of a double-header Wednesday for its first win of the season.

Starting pitcher Mary Burnham got off to a rough start allowing two singles and a walk to Stillman’s first three batters. Head Coach Jennifer Perkins Tyler had seen enough and pulled her to insert Ahlynn Hamm.

With the bases loaded, Hamm slammed the door on Stillman’s hope of getting off to an early lead when she forced a double play and then a ground out to get the Skyhawks out of the jam. Hamm pitched the full seven innings and only allowed two runs on six hits.

The Skyhawks bats got off to a cold start with zero hits in the first three innings. The Skyhawks offense got a little life in the fourth inning when Taylor Knight singled to drive Asia Jones in from second base. One run is all the Skyhawks could muster in the third as they stranded a runner in scoring position when Kayla Wyatt struck out looking to end the inning.

Stillman battled back to take the lead in the top of the fifth as they plated two runs but left two runners on.

The bottom of the fifth was the difference in the game with the Skyhawks putting three more runs on the board to give themselves a lead that they would not surrender. Haley Lyner, who came into the game 4 for 8 in Point’s first two games, continued her hot start to the season when she singled to drive in the second run of the game for the Skyhawks.

Asia Jones was a batting a paltry .143 coming into the game but was arguably the star of the game versus Stillman. She got a clutch single in the bottom of the fifth to grab her first two RBIs of the season. Jones ended the game 2 for 3 with one run scored and two RBIs.

Hamm gave Stillman no lifelines over the final two innings, allowing zero hits to close out the game.

Point University improved to 1-2 on the season and has yet to start conference play. The second game was set to start shortly after game one finished.