To rezone or not to rezone? Housing development plans met mostly with ire from citizens 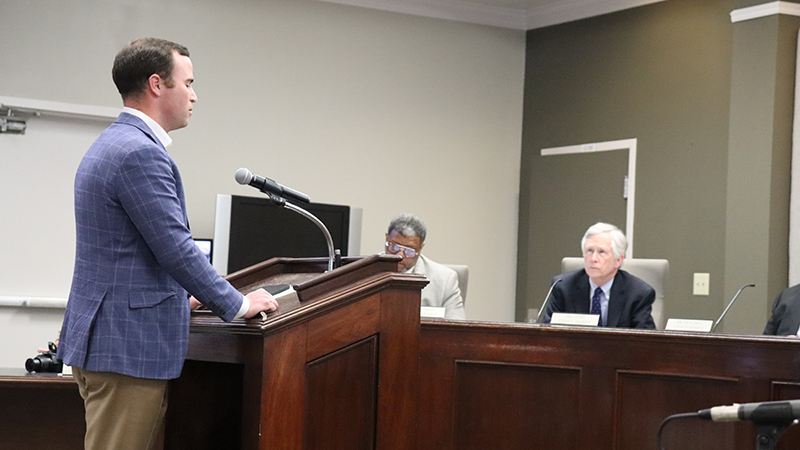 Noah Randall with Alliance Construction spoke in favor of the rezoning of the 1400 block of Vernon St. He said the housing project had the potential to bring growth to the LaGrange community and provide needed housing in the area.

There were several speakers — for and against — the potential rezoning at the 1400 block of Vernon Street from single-family housing to multi-family housing. The city council heard both sides during a public hearing at Tuesday night’s meeting. In all, three people spoke in favor of the rezoning and five spoke against it.

The developer, Alliance Residential Company, is planning a 320-unit housing development but needs approval from the LaGrange City Council.

Noah Randall, the managing director at Alliance Residential Company, spoke in favor of the project. He said the company has a vision for the project and that it will be tailored to the community.

“We have a vision for this project and for the residents in the community here in LaGrange that is worthy of your consideration,” Randall said.

“We approach each project individually. Each project is unique, just like the communities that are in it.”

Randall said he hopes to create a space that will be optimal for helping LaGrange grow and attract young adults to the area.

David Sample was the first to speak in opposition and introduced his neighbors who spoke on the issue.

Sample said in an interview after the meeting that he believes this development is not a good idea per the eight standards set by the Unified Development Ordinance and a comprehensive study by the City of LaGrange.

“There was actually a survey that was completed by LaGrange residents, and multifamily housing was the lowest on the list of preferred housing types. Single-Family Housing was listed as number one,” Sample said.

Janice Ingram, a long-time resident of LaGrange, spoke to the council and asked them to consider the citizens first when deciding whether or not to approve the construction.

Kim Burch, another resident, also spoke against the rezoning.

“I don’t believe they’re familiar enough with our community to know what we demand, the quality that we demand, [and] the forethought we have when we build communities,” Burch said.

The City of LaGrange is expected to hold a second reading at the next city council meeting.