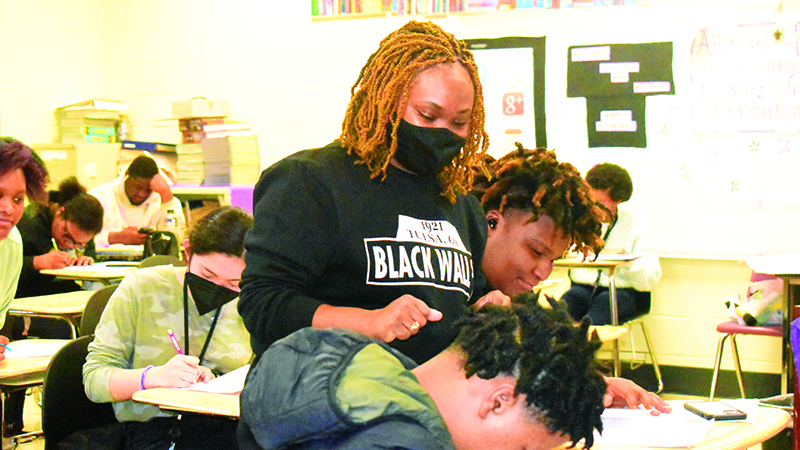 A recently introduced course at Troup High School is giving students a chance to take a deeper study of Black history.

The course is described as an in-depth study of civil rights in the United States, allowing students to explore historic events and people that shaped Black modern society and their impact on the nation.

The idea for an African American studies elective came from English teacher Leilani Rudd who noted that students often had questions about Black individuals when they were discussed in her classes.

The course was introduced in the fall, giving students a chance to learn about Black leaders beyond just Martin Luther King and otherprominent civil rights leaders.

The elective course is broken down into nine units that are taught in intervals throughout a semester. Some subjects, such as the study of African tribes, culture in language, are covered in one week, while other expansive subjects, like the emancipation of slavery, is spread across three weeks.

In elementary schools, subjects of Black history are expressed with video and instruction such as door decorating contests. Students also learn about Black artists, actors and other iconic individuals.

“It takes time,” Shumate said. “We have to make sure our curriculum matches what the state tests are but also today’s society. We need to get it more coherent district-wide, but we allow schools to do their own thing and choose how they celebrate [Black History Month].”

As topics, such as Critical Race Theory, are debated around the country, the Georgia House advanced a bill Thursday that would regulate “divisive concepts” on race in the classroom. The Georgia Senate is also discussing a similar bill in Senate Bill 377.

Such subjects have the potential to be brought up in Rudd’s course and are addressed carefully.

“[When] addressing [those topics] in a classroom setting, it always feels like we’re walking on eggshells,” Rudd said. “A lot of times you do have to pick and choose which ones are more addressed. But with me, I always try to create that environment where if the kids ask a question. I’ve already prepared them in the way they approach asking a question. I welcome any question that they have to ask.”

Other area high schools, such as LaGrange High School, have plans to introduce similar courses into their curriculum in upcoming semesters, Watts said. Both Rudd and Watts hope to expand the course’s interest to White students. Last semester, only one White student was enrolled in the course. This semester, there are two White students and an Asian student in the class.

“We really want to see more diversity in the course,” Watts said. “In its first year of implementation, seeing the name of the course on a potential elective sheet without a lot of explanation … it is currently made up of a minority population. But the kids who took it the first semester thoroughly enjoyed it. They’ve been talking about it. So you know a course is doing a good thing when the kids are talking about it to other kids.”