Small Business Saturday: Brandon Todd had few role models in the business world growing up—now he’s one in the community 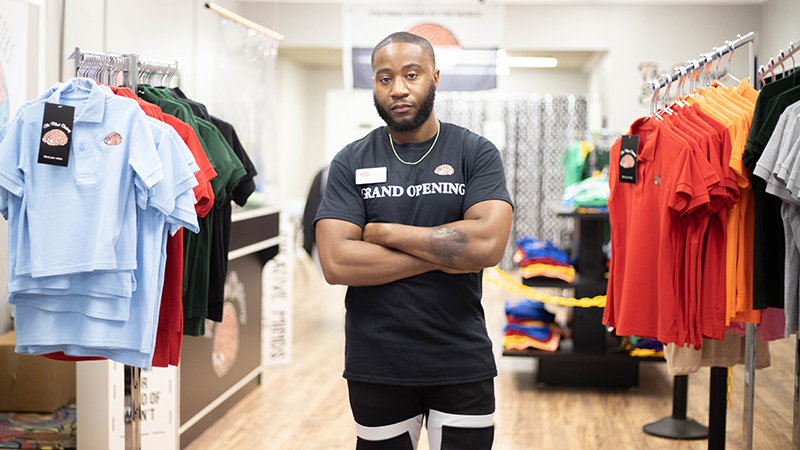 Brandon Todd has been busy in the LaGrange community for the past several years has he runs not one, but two businesses. His interest in the business world has existed since childhood, he said, so he had plenty of initiative to get him started down the road of entrepreneurship as an adult.

Todd majored in business in college and always had ideas bouncing around in his head. In 2017 however, Todd underwent a brief hiatus following a motorcycle accident that cost him his left leg.

“I had a setback and with the accident and [I had to] learn how to walk again and really get my mind right,” Todd said. “But, I call the setback the setup, because it set me up for where I am now.”

Todd returned to the business scene in time to open his clothing store in downtown LaGrange, The Mind Clothing, early 2020.

The Mind Clothing offers hats, socks, shirts, pants and more from newborn to adult sizes. The clothing line is of his own design, and most clothing pieces have ‘the mind’ or the equally symbolic brain stitched into it.

Todd said his vision for The Mind Clothing is to positively push individuals forward throughout the world in all aspects of life through fashion. Todd often self-promotes his clothing line, which comes in traditional and bright, complementary colors.

Nearly two years later, the community reception continues to hold over well, though Todd does notice a small disparity with certain customers.

“Sometimes people walk past my store and look in and it’s like they don’t really feel like they’re welcome, I guess, if they see a black person behind the counter,” Todd said. “I think they hold back [from coming in] because, maybe, they’re afraid of what they may experience. But you don’t know unless you walk in. My business is just like any other business on this street. If you see something you like … just come in.”

Despite this, Todd continues to remain optimistic about his business dealings and keeps open communication with not only visiting customers, but with other business owners, black or otherwise, in the community.

Yet, the feeling of being a Black-owned business in a location like downtown LaGrange is an amazing one no matter what, he said. Todd was raised within Benjamin Harvey Hill homes community on Whitesville Road, which were torn down in 2015. The area that had its share of problems, Todd noted, and role models, especially business ones, were scarce. Many worked for other business owners or ran someone else’s business in their absence. Todd’s father, however, owned a small construction business and repaired roofs and basements. Todd would tag along and observe, which sparked his entrepreneurship mentality.

“Growing up there, [I didn’t] see or visualize that a black man who hung around the projects [would move] downtown and have a business. It wasn’t even a possibility,” Todd said. “We know there’s still racial tension here in LaGrange, and a lot of other places. So coming from where I came from and making something like [my business] happen [is] a proud moment.”

With his clothing store running smoothly, Todd ventured south to Vernon Street where he helped open Not Another Smoothie Shop alongside business co-owner Xavier Hatten Jr. The eatery opened in late 2021 and drew in customers due to its unique flavor combinations and names. Some of Todd’s personal favorites include Training Day, a mix of almond milk, banana, blueberries, peanut butter and a protein.

Perhaps one day, he said, a third business could be in the mix.