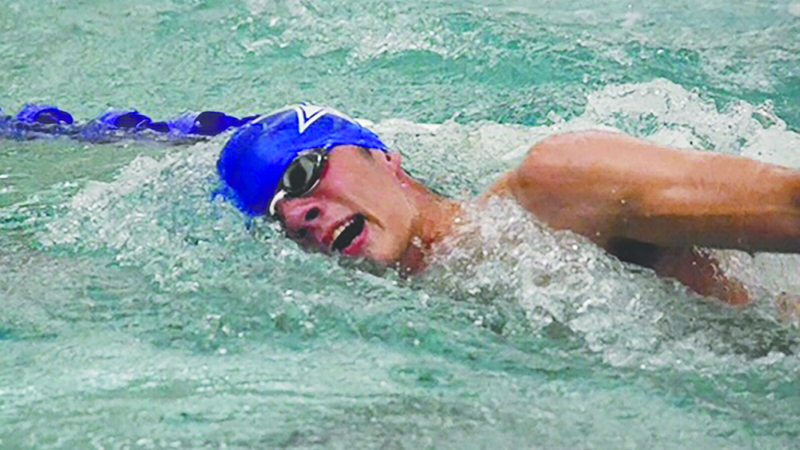 LaGrange High School’s Bryce Kuhn set his personal record at the state swim meet en route to a 37th place finish. Kuhn swam in the 50-yard freestyle competition and swam it in a personal best 22.91 seconds.

Kuhn is a dual-sport athlete and has often had swim meets and soccer matches on the same day.

“He did really well (at state) and then came home to a soccer match that night,” LaGrange head swimming coach Laura Colley said.

Kuhn swam with his older brother at LaGrange High School for his first two years and his father, Ken “Buzz” Kuhn, is one of the assistant swim coaches. Family has been a major part of his swimming career.

“I loved it because I’ve always, always put family first,” Bryce Kuhn said. “My brother and my dad are two of the biggest influences in my life.”

Buzz Kuhn was an outstanding swimmer in his own right and was a part of the swim team at Louisiana State University in the early 2000s. Having his father there for him every step of his swimming career was both a gift and burden.

Bryce played many different sports when he was younger and did not find himself in a pool competing until his freshman year at LaGrange High School.

“My older sister and my older brother started swimming in high school, and I saw how happy it made my dad, he loves coaching swim and misses swimming,” Kuhn said. “He asked me if I wanted to swim, he never forced me to.”

Over his four years swimming, Colley has seen him grow in and out of the pool.

“Bryce was really good about making sure he knew what time the bus was there, he would make sure everybody had their equipment,” Colley said. “I have definitely seen a growth in him.”

Because of the limited size of the swim team at LaGrange High School captains were not appointed, but Colley saw Kuhn as the captain and the leader of the team.

Kuhn might have finished even higher at the state swim meet, but the Grangers swim team had to delay the start of practices, which limited how much time Kuhn had in the pool to practice.

Kuhn was not looking to make excuses but felt this definitely affected his performances this season.

“It was not getting the reps in, but it was also about the mindset because I was ready to swim and then it didn’t happen so I was kind of bummed out about it and that affected my attitude,” Kuhn said.

Kuhn was a competitive swimmer over his first two seasons — making the state swim meet his sophomore season — but did not start taking swimming seriously until his junior year.

“That’s when he really started getting more dedicated, and when he’s dedicated he works really hard at it,” Colley said. “I don’t think he realized how talented he was until then.”

“Looking around, seeing everybody swim at the state swim meet, I realized I made state and not many people do that,” Kuhn said.

Kuhn believes he had a strong swim career at LaGrange and does not have any regrets about his time spent in the pool. For the next few months of his senior year, you will find Kuhn on the soccer field trying to lead the Grangers back to the state playoffs.