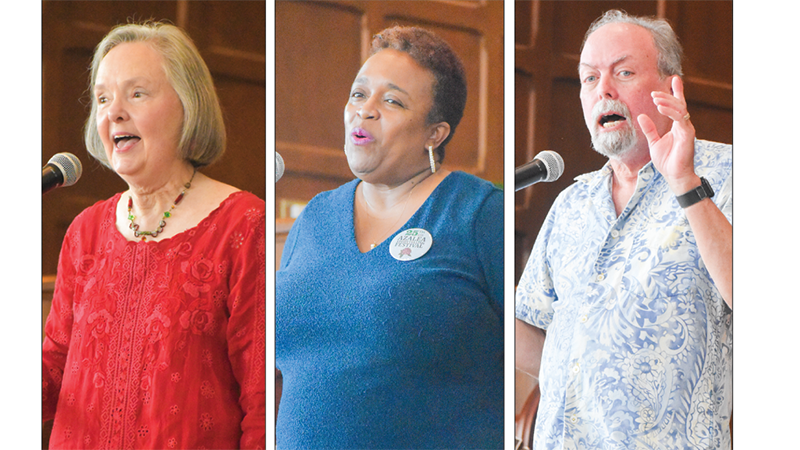 Three local and visiting storytellers charmed dozens of LaGrange residents Sunday as they introduced them to the art of storytelling duringA Taste of Storytelling an annual prelude to the 25th annual Azalea Storytelling Festival.

The event, held at First Presbyterian on Broad Street, was a smaller gathering compared to the annual festival held at the LaGrange College’s Callaway Auditorium each March, but it featured skilled and witty storytellers that struck chords with attendees.

“It whets everyone’s appetites for [the festival] and gets them ready for the main event,” said Carol Cain, a member of the Azalea Storytelling Festival’s planning committee.

A Taste of Storytelling featured regional tellers Andy Russel and Jane Owen Cunningham and local teller Felecia Moore, who shared renditions of experiences in their lives that made listeners laugh and awe.

Moore, an Archives Specialist at LaGrange College’s Lewis Library’s Suber Archives, shared her experience of interviewing a group of sisters, Annie Lee Gunn, Marie Gunn and Miss Reasie Gunn, who worked together at the LaGrange College’s cafeteria for over 30 years.

Moore initially came across the story idea from a Facebook post of Kenneth McCamey, who thanked the women for helping him through his time at LaGrange College.

“McCamey said to me that the reason he was so grateful to them was they would make sure that every time he came into the cafeteria without money … they always made sure he always had a meal,” Moore said. “They would take up money between other employees in the cafeteria and make sure he had enough to pay for his meal.”

Moore interviewed them for her preservation project and learned about not only their close connection with the students they fed daily but also the relationship they had with a former LaGrange College president, Stuart Gunthrey, and his family. The family visited them during the holidays for several years, Moore noted.

Cunningham, a national storyteller who has been featured in several storytelling events, told two tales that centered around her childhood in her rural hometown in Mississippi. The first featured a younger Cunningham’s dilemma of having a ‘plain Jane’ sort of name, particularly that she was envious of her fellow first-grade students for having “long, beautiful” names and middle names, which she lacked.

The second detailed the close-knit relationship between Cunningham, her older sister and her parents. In her tale, Cunningham described a moment when she and her sister seemed to go back and forth with low-stake teasing that nearly ended in the sisters receiving a switching from their parents. However, Cunningham closed the story with a note that her older sister always looked out for her and ended most evenings sharing a bed with her.

“She looked at me from her room. We were right across from each other, and she said ‘Jane, would you like me to read to you?’ And I got into bed with my big sister,” Cunningham said in closing.

With the event falling on the day before Valentine’s Day, Russell, a national storyteller and musician, decided to first tell a love story about how his parents fell in love.

His parents had attended high school together, Russell relayed, but didn’t start seriously dating until his mother was in college and father was in the military. Following a series of dates, including a scandalously unchaperoned one, Russell’s parents became engaged and have since been married for 68 years.

“I asked my mother when the two of [them] first started dating, how did [they] know it was serious,” Russel said. “She looked at me and said ‘Oh it was serious from the start.’ And then, my 90-year-old mother giggled like a school girl and just for a moment, I caught a glimpse of my mother from almost 70 years ago. She smiled and leaned forward and said, ‘I think it’s still pretty serious.’”

With the large-scale event only two weeks away, Cain said the committee is planning to hold the festival at full capacity in its traditional space at the Callaway Auditorium. The festival was held in a smaller capacity last year at the First United Methodist Church.

The Azalea Storytelling Festival will take place March 4, 5 and 6. Friends of LaGrange Memorial Library sponsored A Taste of Storytelling.

King, queen crowned at Behind the Mask, goal almost…