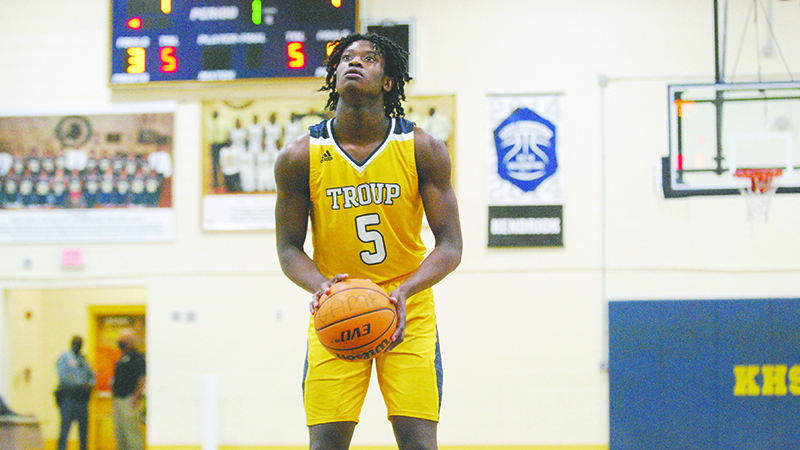 The Troup County Tigers could not pull off an upset as their season ended in heartbreaking fashion to Kendrick High School 68-63. This was Troup County’s third loss to Kendrick this season, all by single-digits.

The game had four lead changes over the first four minutes and change before Troup County went on a 6-0 run to establish some momentum. Dejaylen Campbell hit a tear-drop floater as time expired at the end of the first to give the Tigers a 17-7 lead going into the second quarter.

The Cherokees dominated the second quarter starting with a quick 5-0 run in the first minute and a half. The Cherokees battled back and took the lead 25-24 with 2:07 left to go in the second quarter — their first lead since it was 4-3 earlier in the first quarter. Troup County took the lead back on the ensuing possession but would be the last lead of the half for the Tigers. Cherokee senior John Williams sunk a deep 3-pointer as the buzzer sounded to get the home crowd on their feet. This gave Kendrick a four-point lead and gave them all the momentum heading into the second half.

“It’s a tale of two halves, kind of like how our season went,” Troup County Head Coach Blake Craft said. “We had a really good half and a bald half. The first half tonight wasn’t great, we had a great second half.”

Kendrick took that momentum at the end of the first half and built its first double-digit lead of the game with 3:14 to go in the third quarter. Troup County fought back and cut the lead down to three when Jay Johnson nailed a 3-pointer from the corner with 50 seconds left to go in the third quarter. The Cherokees were able to get their lead back up to four heading into the fourth quarter.

Jay Jonson was the star for Troup as he connected on four 3-pointers en route to a team high 16 points. Tay Shell complemented this outside shooting with a big performance in the front court — he finished second on the team in points with 15.

The Tigers started the fourth quarter on a 4-0 run, which tied the game when Deovion Tucker hit a silky euro step layup in the paint. Kendrick got the lead back up to five late, but Troup County cut it back down to two with two minutes left to go in the game. The teams traded bucket for bucket until Kendrick head coach Andre’ Dye called a timeout with Kendrick leading 60-58 with 1:28 left on the clock. The referees called technical foul calls with 44.4 seconds left— players from both teams had words with one another but two technical fouls were assessed on Troup County and none on Kendrick. Kendrick hit two of the four technical foul shots and two free throws on a foul call to go up by six. Johnson hit another huge three-point shot with 35 seconds to go in the game to cut the lead to three. Troup County had to resort to fouling but could not find a way to climb back. A thunderous dunk and massive block by Da’Lin Thomas put a bow on the win for Kendrick.

Despite the fact the season came to a disappointing ending, there is hope on the horizon for Tigers’ basketball.

“This year we had one returning player with varsity experience, next year we will have eight or nine guys,” Craft said. “Next season we’ll have been here before so we’ll know how to act, this is a lot of these guys first times being in this type of situation.”

The next time Troup County boys basketball team will take the court will be next fall, but for now they’ll have to look back on this season and see what worked and what did not.