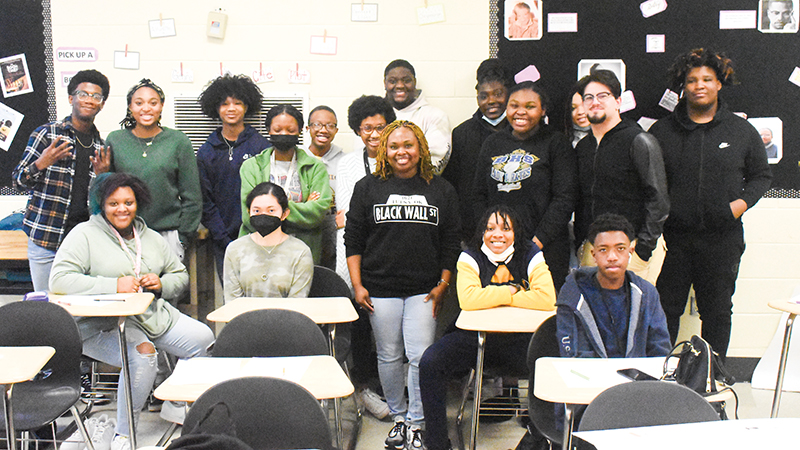 As ongoing legislation like House Bill 1013 and Senate Bill 377 attempt to stipulate how race is taught in the classroom, students enrolled in an elective history course at Troup High School are getting their fill of African American history and culture. They are enjoying the subject immensely.
Nearly 20 students are enrolled in an African American studies elective course at Troup High, the vast majority of which are Black. The course, taught by teacher Leilani Rudd, was introduced last semester and has continued to strike a chord with its participants.
Last Friday, students in the course were learning about the 16th St. Baptist Church bombing in Birmingham, Alabama in 1963. Many students said they were familiar with the event, but they had not been aware of its aftermath such as the Ballad of Birmingham poem Dudley Randall wrote in response.
“I heard about it, but [Rudd] is teaching us deeper [information] about it,” Monyia Murphey, a senior, said. “[We learned] about how one of the kids [who] survived and her background and how she’s maintaining today.”
Murphey recalled that Black History in elementary school only covered the basic history and best-known figures.
“They mainly taught us about Martin Luther King and Rosa Parks. They didn’t really tell us about Harriet Tubman and all those other people who are important too,” Murphey said.
“Sometimes I’m like, ‘wow, they kept this away from us for so many years. I’m able to understand and know what my ancestors did for us. It makes me walk different and think that I need to take things more seriously.”
Deo’vion Tucker, a junior, decided to take the course to broaden his view on Black history, a subject he agreed was barely taught in classes.
“In a regular history class, [I] want to learn more Black history, but we learn more about Western Expansion, stuff like that,” Tucker said. “[In this class], you learn more … like the slave ships and how they were taken from their country.”
Tucker and his fellow classmates also learn about the entertainment side of Black history, including prominent actors like Chadwick Boseman and Anika Noni Rose.
Endia Harris, a junior, also had a constricted view of Black history outside of the Civil Rights movement and slavery. The course has taught Harris that there’s more to the subject.
“I feel like if they didn’t offer this class, I would have to educate myself on things like this, but this class has been a real eye-opener to me,” Harris said. “There’s so much more to it. I think that it’s a really good class that everyone should take.”
Trinity Perkins, a junior, took the class to learn more about her heritage. Perkins said she often returns home to discuss some of the literature discussed in the class.
“We read a story about how a slave master would choose a slave … when I told about it, he was like ‘wow, you’re learning about stuff that I didn’t even learn,’ and I like to hear that,” Perkins said.
Intrigued by the subjects of the course, students like Tucker and Perkins have decided to attend HBCU colleges, which are historically Black college or universities that were before the landmark Civil Rights Act in 1964.
Tucker wants to explore African American courses while he pursues mechanical engineering. Perkins wants to pursue a degree in African American studies.
“That’s kind of why I’m taking this class,” Jenkins said. “[I want to] open my eyes to some things. Hearing how we talk in this class and knowing that some people are not going to think the same way I do, and they weren’t brought up the same way I was, we’re going to have different opportunities.”
Rudd, as well as other members of the Troup County School System, have previously voiced support for the course and hoping to garner a more diverse interest in it in future semesters.