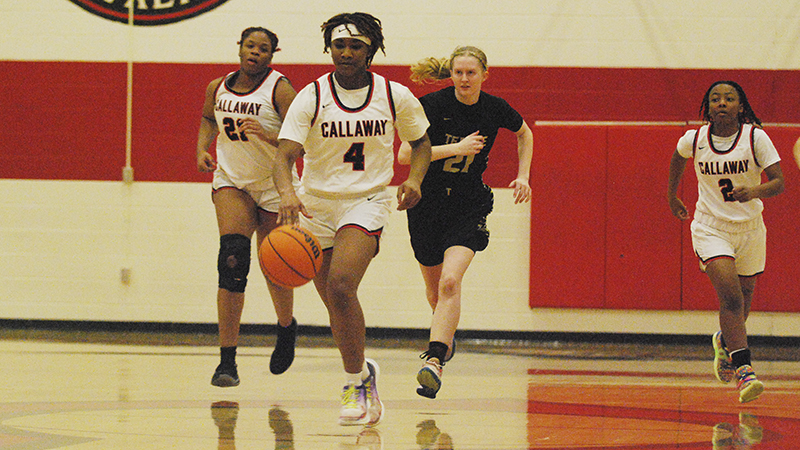 The Callaway Cavaliers girls basketball team dominated Temple 66-19 in the semifinal of the 2A Region 5 tournament.

The Cavaliers scored the first four points of the game, but the Tigers were able to fight to keep the game close. The Cavaliers led 13-7 after the first quarter.

Callaway’s defense was suffocating in the second quarter, only allowing two points in the quarter. The Cavaliers’ defense forced steals and grabbed rebounds and kicked them out quickly to score easy points in transition. Callaway established a double-digit lead with seven minutes to go in the second quarter and never looked back. Lacy Thomas grabbed an offensive board and a put back on a missed free throw to put the Cavaliers up 21-7 and sapped the life out of the Tigers.

Gabrielle Johnson splashed three 3-pointers en-route to a game high 15 points and chipped in on the glass with six rebounds as well. Thomas stuffed the stat sheet with 14 points, nine rebounds, three steals and two blocks as she was too much for the Tigers to handle on both ends of the court.

With this win, the Cavaliers will host the region final against Heard County on Feb. 18 at 7:30 p.m. Callaway will be heavy favorites after sweeping the region in the regular season including two wins over Heard County — handing Heard County their only two region losses of the season.