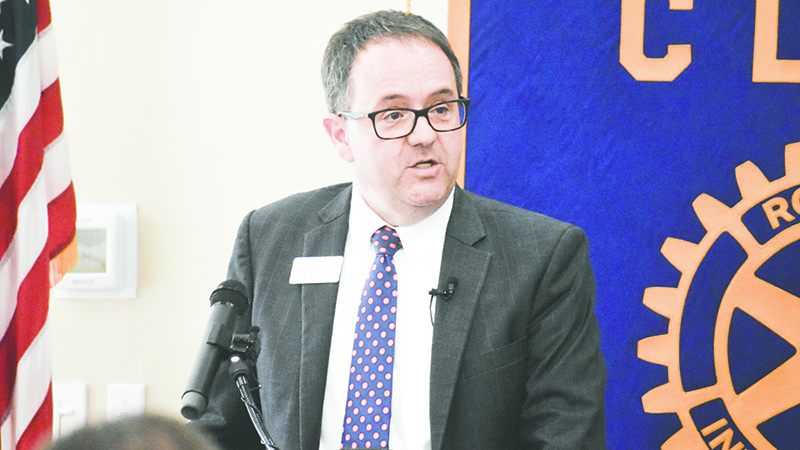 Growth. Community. Cooperation. Those were the focuses LaGrange Mayor Jim Thornton highlighted during his annual State of the City address Wednesday morning.

“It’s great to be back with you in person … and I hope this is a harbinger of things to come [and] that we’ll be able to continue to meet in person, and we can start to put the pandemic in our review mirror,” Thornton greeted to members of the LaGrange Rotary Club where he gave the address.

Despite the pandemic’s constraints on the community during the last two years, Thornton said LaGrange’s economy is still strong, healthy and “getting better.”

“As a city, we are growing we are thriving and we are improving,” he said. “LaGrange is not perfect, no community is, but I think if you look at some of the developments that have occurred and are currently underway … you’ll see that we’re getting a little bit better, and we’re getting better all the time.”

He noted that while LaGrange was plentiful in job opportunities from both local businesses and large-scale entities like KIA Georgia, there are currently more jobs than there are people. However, growth is still happening, spearing needs such as more housing, parks, and improvements and expansion of the city’s sewer and water systems.

“I believe the growth that we are seeing now is sustainable,” he said. “It’s sustainable because of the underlining economic factors that are driving that growth.”

With the aspect of growth comes needs such as safety, housing, water and sewer access and casual amenities such as parks, Thornton noted.

Highlights documented in the mayor’s address include the incoming park projects like Granger Park and Hamilton Road Park, as well as planned housing developments.

Plans are in place to develop a 144-apartment complex on Main St. in downtown LaGrange as well as redevelop the old Dawson St. School into 67 housing units. Newer plans include developing an 830-acre tract of land on Mooty Bridge Road between Ann Bailey Way and West Point Lake for neighborhood commercial development.

Thornton said the city’s ongoing partnership with its county counterparts also ensure quality projects, such as the Rosemont School water line, which has the potential to spear more development for that area of the county.

With such progress underway, Thornton noted an importance to keeping progress slow and steady.