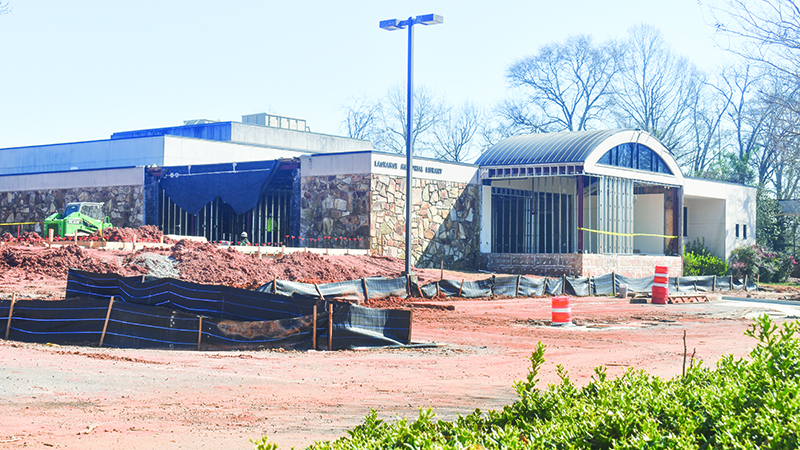 Keith Schuermann, director of the Troup-Harris Regional Library system, updated the Troup County Board of Commissioners at its work session Tuesday on the ongoing LaGrange Memorial Library renovation project. He noted surprises during the renovation this past year have been far and few between, though at one point, something unexpected was found.

During the initial stage of the renovation, crews with Principal Construction located a few unforeseen but typical hurdles, such as low-bearing walls. But as crews were digging out the grounds of the Alford St. library near a plot of land on Harwell Ave., they came across a headstone.

Schuermann said there were concerns at first that there may have been a marked grave on the grounds, but it was ultimately concluded that someone most likely moved the headstone to Harwell Ave. when a house was there. Otherwise, Schuermann said, there was no further evidence that a burial site may have been in that area.

In a twist of irony, Jay Johnson, vice president of Principal Construction shared the name on the headstone.

“I said [to Johnson], we have a spot right there for you if this project goes south,” Schuermann joked.

However, the project has otherwise run smoothly, Schuermann reported. Most of the library’s interior and exterior walls have been gutted to prepare for expansion. The library is still attempting to raise at least $1.48 million more to finish the $6.3 million project comfortably.

“We have enough money to get the construction done … but following that construction, we’re going to need a lot of money for furniture, fixtures, equipment, [and] there’s a lot of glass walls in our design,” Schuermann said.

Johnson added that the project should stay in budget. Some of the aesthetic aspects of the project such as lighting fixtures need to be ordered as soon as possible due to recent inflation issues.

“We have a few issues to work around, but we will be,” Johnson said. “In the grand scheme of our project, we are going to come pretty close. We’ve got the design team on board to make some considerations as far as letting loose some of the [design elements] they were really hanging on to.”

Schuermann said the library is planning to push for corporate sponsorships or naming rights to garner the funds.

Late last year, the library sent out 800 letters inquiring citizens to donate to the project. Schuermann said the campaign netted $30,000 overall. With this donation, the project has generated $153,000 of the $1.48 million shortfall.

Currently, the planned reopening of the LaGrange Memorial Library is set for Spring 2023.